The Government insists the contract to build a hybrid-renewable power scheme for Coober Pedy – awarded to energy giant EDL without going to tender and worth an estimated $192 million over 20 years – wasn’t theirs to evaluate.

However, the South Australian taxpayer carries the bulk of the risk of the project because the Government subsidises the town’s power prices.

In response to questioning from InDaily, the Department of State Development said the Government’s Unsolicited Proposal Steering Committee decided in May 2015 that an “unsolicited proposal” was not required to be considered for the hybrid-renewable project, which is nearing completion at a capital cost of $36 million.

The Government’s decision means the proposal – regarded by the council and some energy industry players as a very profitable one for EDL – was not put through the rigorous process established after widespread outrage at the 2013 decision to accept an unsolicited offer from one consortium to develop Crown land at Gillman land without going to tender.

Then Auditor-General Simon O’Neill criticised the process involved in the Gillman decision, including highlighting the lack of a formal policy to evaluate so-called “unsolicited bids”.

The Government introduced such a policy in November 2014, with Premier Jay Weatherill saying it would provide transparency and certainty.

However, the Government panel set up to assess unsolicited bids decided against considering the Coober Pedy project under the guidelines. InDaily has asked the office of Energy Minister Tom Koutsantonis why it made this decision.

Coober Pedy councillor Justin Freytag said he could not understand why the Government did not consider the deal under its established processes.

“Why didn’t they go out and look to see if someone else could do it,” he asked.

“So much for their unsolicited bid process.

Opposition deputy leader Vickie Chapman, who has asked the Auditor-General to assess the deal, said the Government had side-stepped its own process.

“It isn’t a question of saying ‘we will be discretionary about what should be considered an unsolicited bid’ – they have to consider unsolicited bids (under the guidelines).

“This is just a backdoor way of ignoring the rules.

“It’s utterly outrageous – the Government claimed they had learned the lesson from Gillman. They had a new regime in place and they have completely ignored it.”

State Government documents seen by InDaily dating back to 2014 indicate that the Government knew the price for the project was set at the beginning of the process.

The document trail for the project also shows the Coober Pedy Council repeatedly raised concerns about a lack of tender for the project, including before and after the Unsolicited Proposal Steering Committee made its May 2015 decision to allow the EDL project to be freed from the unsolicited bid guidelines.

In fact, then mayor Stephen Staines told the council in April 2015 – just one month before the steering comittee’s decision – that he was “concerned that alternative energy supply options have not been tested by approaching the open market”.

The Government’s guidelines include five criteria for allowing an unsolicited bid. On the face of it, the EDL proposal would have failed to meet several of the stipulations.

No competing proposals (InDaily has seen evidence that numerous companies had expressed interest in providing power to the town).

Community need/Government Priority (the project would likely have met this criteria, but so too would competing bids).

Uniqueness of the proposal: “Can this proposal be readily delivered by competitors?” (The answer to that question in the appears to be “yes”.)

Value for money (this is contested: the Government believes the EDL deal will save $5.4 million; an independent consultant’s report shows it could end up costing twice as much as other options).

Capacity and Capability of proponent.

The guidelines say an unsolicited bid could involve one or more of areas including delivery of goods and services to or on behalf of Government, provision of infrastructure, access to Government assets, seeking government support to undertake a specific activity, or financing arrangements.

The Coober Pedy deal appears to cover many of these areas. Under the Coober Pedy power arrangements, EDL supplies the power, Coober Pedy council acts as the “retailer”, and the State Government provides a subsidy to ensure residents, businesses and government-supported institutions (police, the hospital, schools etc) are supplied with affordable power.

In response to questions from InDaily, a spokesman for the Department of State Development confirmed the project was submitted to the state Coordinator-General, who oversees the unsolicited bid process, in relation to “assistance for the leases and easements required to install the relevant renewable energy infrastructure on Crown land”.

“The proposal did not relate to EDL’s actual transaction with the council under the then proposed PPA (power purchase agreement),” he said.

“In May 2015, the South Australian Government’s Unsolicited Proposal Steering Committee determined that an unsolicited proposal was not required.

“The Department’s ‘interest’ in this project arose through the RAES (remote areas energy supply) scheme. Under that scheme, the State Government supports more than 3400 customers across 28 sites. The Government’s RAES subsidy funding to Coober Pedy (which is one of three towns which still run their own electricity supply) enables the Council to retail electricity to domestic and commercial customers at equivalent tariffs to on-grid customers. As a result, the Government assisted the Council in its consideration of the EDL project to protect against material increased costs under the RAES scheme.

“The Government did not sponsor the proposal. The Department, at all times, informed the Council that the potential for a deal with EDL was purely a matter for the Council and the Council obtained its own independent technical and legal advice. The State Government is not a party to the relevant contract.” 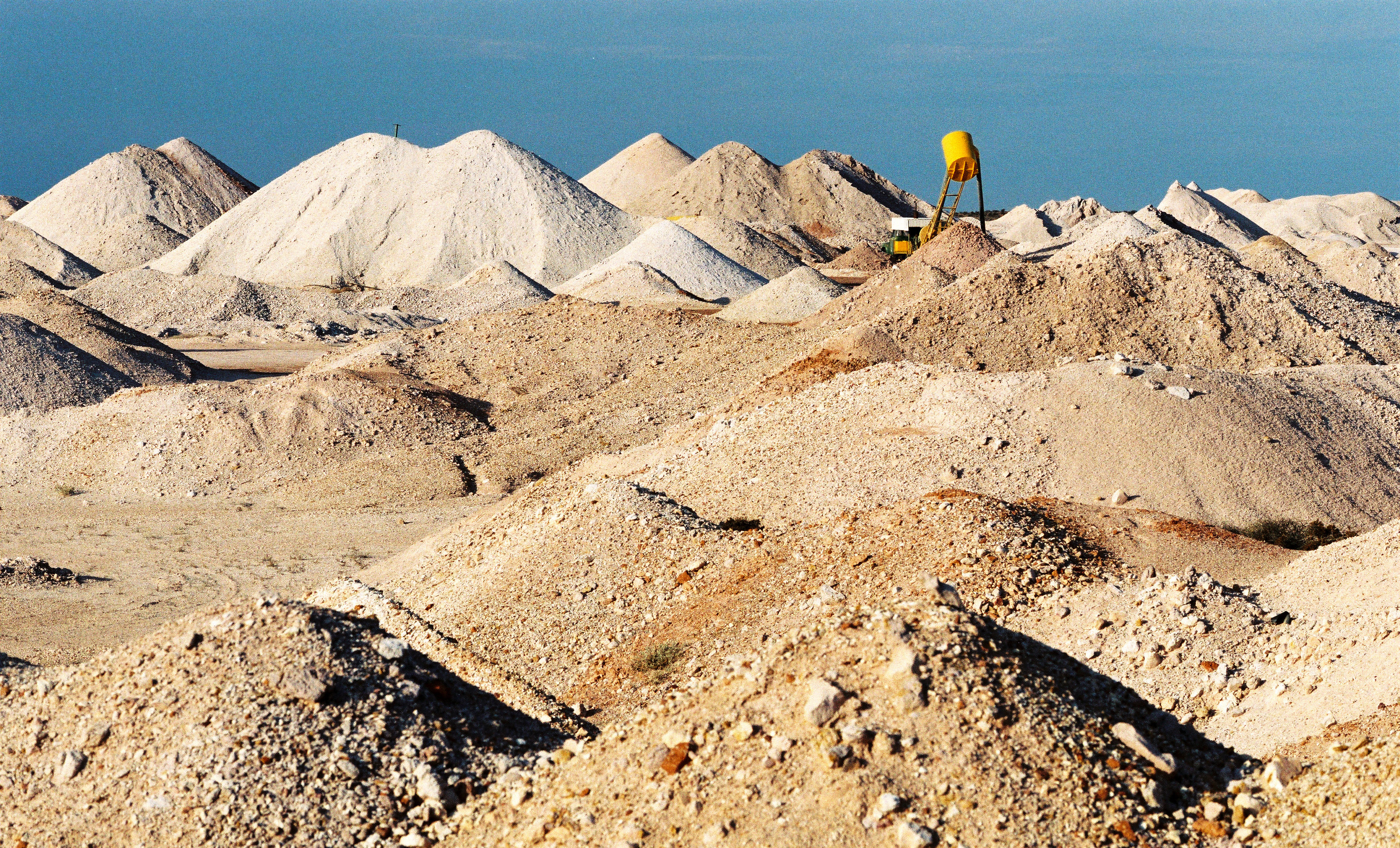 InDaily has reported previously that the council did believe the department was a strong supporter of the scheme, to the point that it relied on its advice when it finally agreed to the deal.

Indeed, InDaily has seen numerous correspondence between DSD officials and the council in which the department promotes and defends the EDL proposal in strong terms.

This support goes back to the earliest days of the proposal.

InDaily understands that in May 2014, an executive with the then Department for Manufacturing, Innovation, Trade, Resources and Energy (the precursor of DSD) wrote to EDL to support the company’s application for federal clean energy funding for the proposal.

The letter, from Vince Duffy, Executive Director of the Energy Markets and Programs Division, says the department has an interest in the project via the RAES scheme. It says the project – subject to funding from the Australian Renewable Energy Agency (ARENA) – would reduce the long-term cost of generating electricity in Coober Pedy.

A “draft term sheet” was attached to the letter, outlining principles for the scheme, including contract charges.

Duffy writes that the department supports further negotiation between the parties based on the term sheet “provided that the project does not adversely affect the subsidy paid by the South Australian Government to DCCP (District Council of Coober Pedy) under the RAES scheme”.

That last point has been contentious ever since.

Correspondence seen by InDaily shows that in the ensuing years, the council repeatedly raised concerns about the lack of competition in the process.

A former acting CEO, Tony Renshaw, who was in charge of the council’s administration when the decision to support the EDL plan, has previously told InDaily that the council relied upon DSD and ARENA’s advice to assess the deal.

The council had also received independent advice from Adelaide engineering firm Resonant Solutions, which warned the deal “has had minimal or no transparency, probity and competitive tension”.

After Davies presented his analysis to the council administration in February 2016, Resonant’s contract was terminated. The council had agreed at a meeting in January 2016 to proceed with the project, before it had received Resonant’s report.

Council members now say they were never presented with the report. Renshaw won’t answer questions about that specific point, but insists that all relevant information provided to him by Resonant was passed on to councillors.

The report, which is strongly contested by the State Government, found the EDL project would cost double that proposed by three companies with more experience and who were not permitted to tender.

The report says the DSD has been a “strong advocate” for the project and will fund the difference between Adelaide’s electricity prices and Coober Pedy’s.

“This subsidy is currently around $3.5m p/a and will increase by $2.4m when the new PPA takes effect,” it says.

“DSD and ARENA assured Council that ‘this was a good deal’. ‘Council would be no worse off’ as espoused by Project proponents.”