The latest City of Adelaide Census of Land Use and Employment, released this week, found the number of jobs in the CBD contracted even as the number of businesses grew.

Despite State Government ambitions for South Australia to become “the knowledge state”, most of those job losses occurred in the “knowledge sector”, which the report defines to include information, media and telecommunications, financial and insurance services, professional, scientific and technical services, education and training, and the arts.

“This is due to a decrease in employment across all knowledge sectors, with the largest declines in the information, media and telecommunications industry (-1802)
and professional, scientific and technical services (-1968)” the report says.

“This reduction could be partly attributed to the reduction in the city based Telstra workforce and the reduction/amalgamation of internet service providers
since 2014.”

The report attributes falling city employee numbers to a downsizing of existing businesses, “in response to current economic conditions”.

Telstra’s Pirie Street workforce has shrunk, as has employment in “corporate head office management services” at Santos and BHP due to the end of the mining boom.

“Another significant reduction has been in call centre operations where the workforces have been reduced or moved out of the City of Adelaide,” the report says.

Businesses that employed five or fewer staff members – “microbusinesses” – accounted for 54 per cent of establishments in the city in 2016.

Medium sized businesses – 20 to 199 employees – accounted for a further 31 per cent. 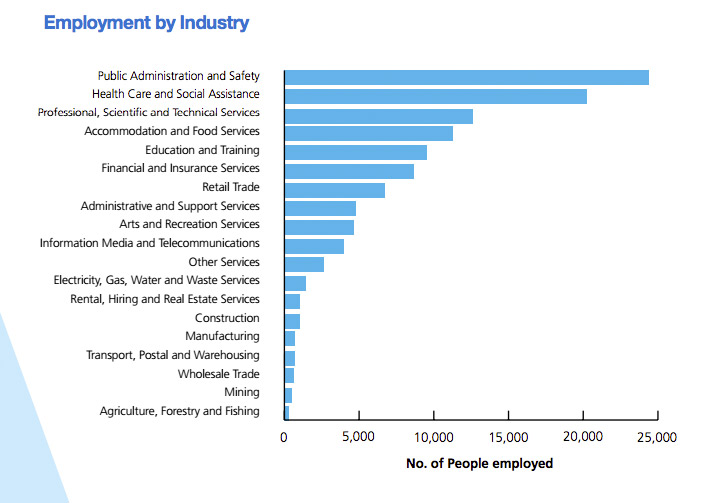 Government and healthcare were the highest-employing industries in the CBD. Image: Census of Land Use and Employment 2017.

The report says this is partially due to a number of new hotels – such as the Ibis Adelaide, the Mayfair Hotel and Quest on King William Street – opening during the period, plus new cafés and restaurants, such as 2KW and Jamie’s Italian.

The “other services” sector – made up of a range of personal, religious, repair and maintenance services – also grew strongly.

This growth was mainly driven by newly opened hairdressing and beauty salons, and partially by the growing popularity of nail care services.

A little over 11 per cent of businesses who responded to the survey had been operating for less than a year.

Image: Census of Land Use and Employment 2017.

In total, 136 “administrative and support services” businesses closed over the two-year period.

These business closures “contributed to a reduction in employment in the knowledge sector from 2014 to 2016,” the report says.

There were also nine fewer employment and recruitment businesses operating in Adelaide’s CBD by 2016. 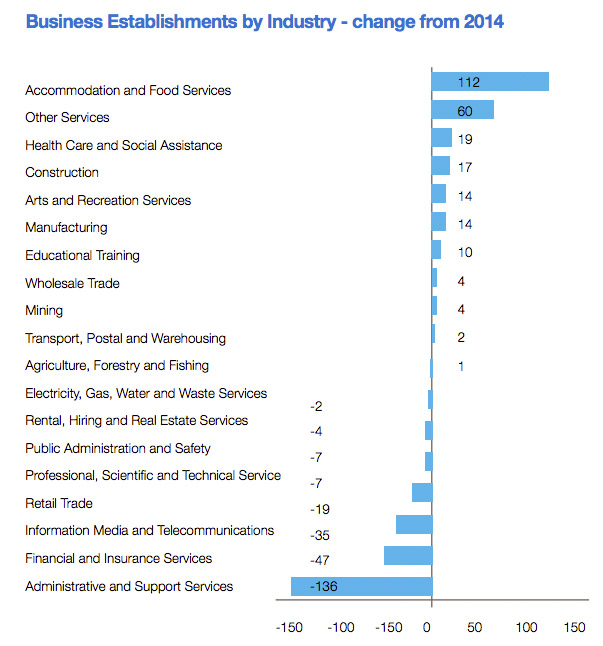 Image: Census of Land Use and Employment 2017.

Just under three per cent of the businesses contacted for the survey declined to be involved – a similar rate to previous years.

You can find the full report here.