The government will also inject $24 million into its Plan for Accelerating Exploration (PACE) program – which provides incentives for companies to extract more gas – and introduce an “energy security target”.

The entire plan is to be paid for using the State Government’s projected budget surplus.

Energy Minister Tom Koutsantonis told reporters this morning the purpose of creating the budget surplus was to have a fund for a “pressing need” and that there was “no more pressing need” than SA’s energy security.

He added that the plan would bring landowners “back to the time where if you find oil or gas on your land it’ll be something to celebrate” by giving those landowners 10 per cent of state government royalties from the sale of those resources.

Weatherill said the plan, which he pitched as putting “people first” rather than the current energy market which prioritises profits, would create at least 630 jobs.

“Our plan will restore security and put downward pressure on prices,” he said.

“We’ll get reliable, affordable and clean power and ensure more of the state’s power is sourced, generated and controlled here in South Australia.

“Our state has built its reputation on clean, green environment and this plan recognises that clean energy is our future.

“South Australia will now lead our nation’s transformation to the next generation of renewable storage technologies and create an international reputation for high-tech industries.”

He said the government would investigate sites for gas power generation that had been originally “scoped out” by the Electricity Trust of South Australia (ETSA) – before SA’s electricity generation was privatised in the late 1990s.

The new power station would feature a battery, providing “inertia” to help stabilise the market.

Koutsantonis said energy generators were extracting monopoly rents from consumers and “that has to be broken – that has to be smashed”.

Weatherill said the plan would eventually lead to South Australia exporting renewable energy to other states through the interconnector, as opposed to importing Victorian coal-fired electricity.

“The interconnector will be going the other way – we’ll be supplying the nation,” he said – adding that he believed South Australia should not have to pay for it since it would help in “greening Australia”.

He said that the government had considered completely re-nationalising South Australia’s grid but dismissed the concept because it would have been “expensive” and taken too long.

“We looked seriously at it,” Weatherill said.

“But it was expensive, it was not timely, it would take a long time to do and we could achieve the same outcome by intervening in the market.”

He said South Australians expected a solution that would protect the state from blackouts next summer, or earlier, and that one of the factors that attracted the government to battery storage was that storage facilities could be rolled out quickly.

A national debate about the electricity market was sparked last September, when South Australia suffered a state-wide blackout in the wake of fierce storms.

Weatherill said that the Government had considered an intervention involving new coal-fired electricity generation from Port Augusta, but also dismissed that concept because: “what we need is a fast-start response – and that’s not Port Augusta [power generation]”.

“We have next summer to grapple with.”

Daniel Spencer from the Repower Port Augusta campaign – advocating large-scale solar thermal power generation for the town – said that such a project could benefit from the energy security target and the renewable technology fund.

The government considered but ruled out undergrounding power cables across the network, which Koutsantonis said that would be prohibitively expensive – $40 billion in total.

Weatherill said the Government could not control the weather – “If a tree falls on a power line it’s going to black out a suburb,” he said – but the government could seize control of energy supply in emergencies.

Over the weekend, billionaire entrepreneur Elon Musk was in contact with the state and federal governments to pitch his large-scale batteries, which can store energy from renewables to ease their intermittency.

Weatherill said Musk would be one of those invited to be involved in the tender for the “grid-scale” battery.

He said the “reputational effect” of attracting an international player such as Elon Musk would be considered as part of the process.

He added that the government expected to be purchasing “services” from the operator of a battery storage plant rather than owning the plant itself, but the government would have the power to direct the plant on and off in “rare” circumstances, such as a large storm.

The government’s plan promises that the new renewable technology fund will be used to “provide South Australia with large-scale storage for renewable energy so power is available when it is needed”.

The fund, which will aim to make renewable energy constantly available rather than only when the sun shines and the wind blows, will be used to develop Australia’s largest grid-connected battery – able to provide the state with 100 megawatts hours of storage.

The fund’s $150 million budget will be split between grants and loans to support proposals from private companies.

The Government promised to go to tender “shortly” to build a new publicly-owned gas power plant, which would provide up to 250 megawatts of generation in times of emergency.

“In the intervening period, the State Government will work with South Australia’s transmission and distribution companies to provide up to 200 megawatts of temporary generation,” the plan says.

“This will provide generation for use over short periods in emergency situations where extreme peaks in demand create a shortfall that cannot be met in other ways.”

The Government is also promising legislation, to give the South Australian Energy Minister new powers to “direct” the national market.

“Ministerial direction includes the ability to direct generators to operate and direct the Australian Energy Market Operators to control flow on the interconnect,” the plan says.

“This will ensure every available option is activated to maintain the state’s electricity supply in an emergency situation or when market forces fail.

“Drafting of new legislation will begin immediately. The Minister’s power will be used as a last-resort measure if the national market does not act in South Australia’s best interests.”

Koutsantonis said he had briefed AEMO on the government’s plan and that it had the market operator’s support.

In an effort to create new investment in clean energy, retailers will be compelled to source a percentage of energy from local generators rather than from Victorian coal via the interconnector.

Weatherill added that nothing in his government’s plan would get in the way of a national emissions intensity scheme, and re-iterated his support for a national price on carbon.

“There is no future in coal.

“It’s only The Australian newspaper, the coal lobby and [former Prime Minister, now backbencher] Tony Abbott that still think that coal is the future.” 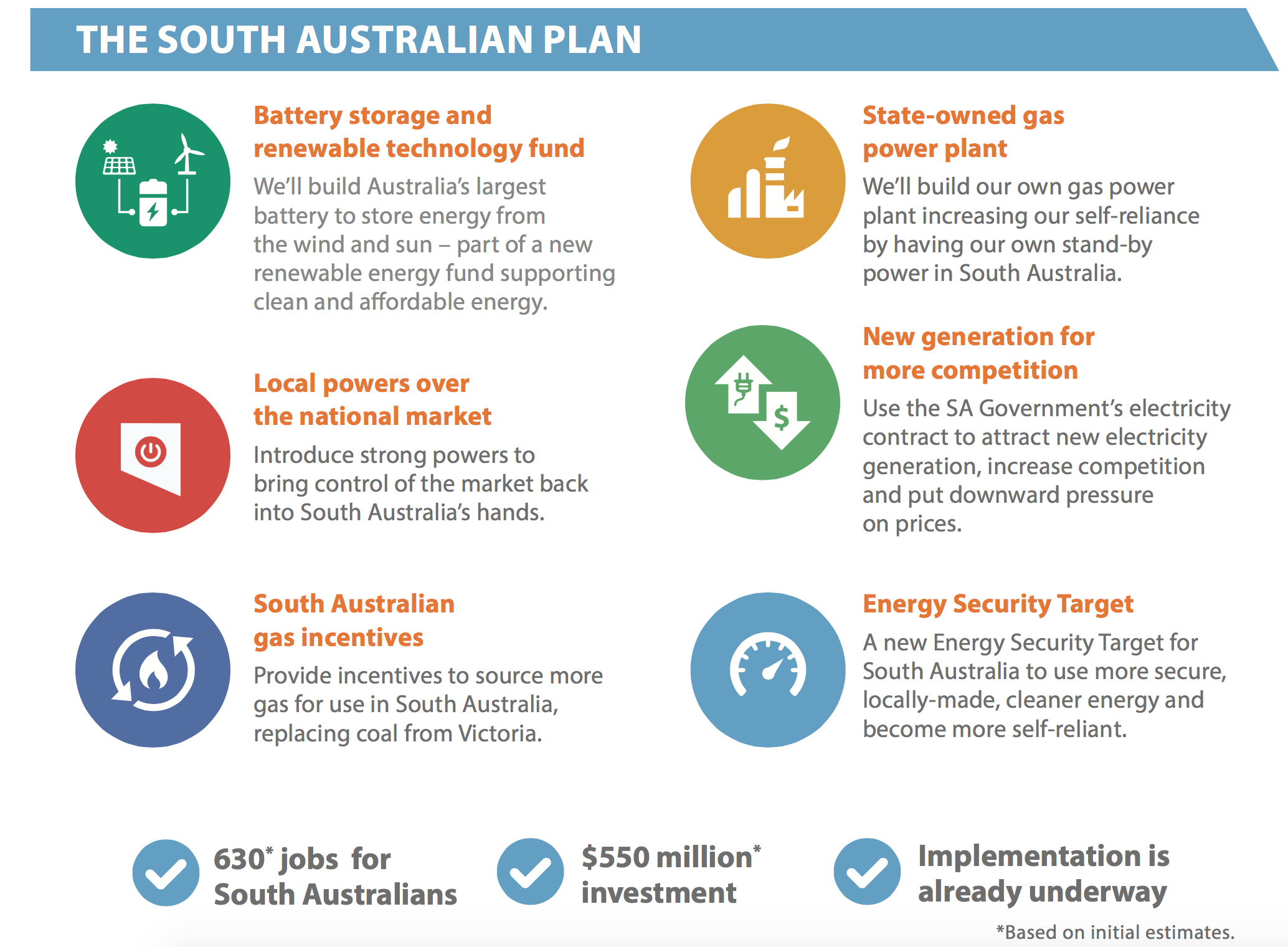 The Government’s summary of its energy plan.

“This is a plan to increase the cost of electricity to South Australian families with Jay Weatherill’s latest attempt to introduce a state-based carbon tax,” he said of the energy security target.