Most of the 71 business operators and 70 residents in the area who responded to the consultation said they wanted the existing separated bikeway to remain as it was or with minor improvements. 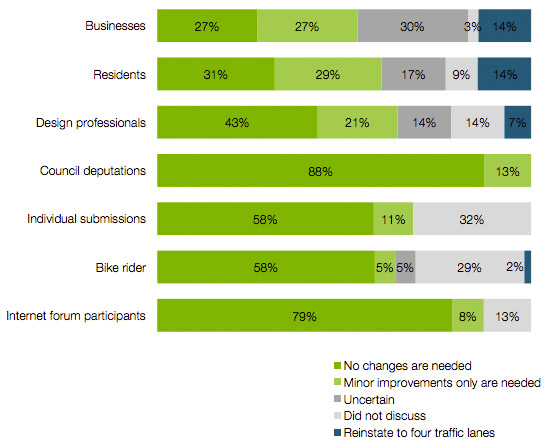 Views on reinstating four lanes of traffic along the southern end of Frome Street.

The report was commissioned by the council and run by consultancy firm Intermethod.

Most business respondents said that all-day on-street car parking under the current setup was more important to them than traffic capacity (i.e. returning two driving lanes in both directions) and that the bikeway was functioning well.

The most popular responses from residents were that the bikeway was functioning well but that there should be improvements to the landscaping.

Only 14 per cent of respondents from both groups said they wanted the council to return the southern end of Frome Street to two lanes of peak-hour traffic in both directions.

Seven per cent of design professionals that responded to the consultation recommended the change.

The results throw a wrench in the works for the city council, which last year resolved to dismantle the separated bikeway – replacing it with a thinner bikeway – to accommodate four peak-hour driving lanes, with two becoming parking lanes outside of peak hours.

But Lord Mayor Martin Haese is digging in.

He told InDaily in a short statement this morning that “I respect the decision of council and I look forward to the discussion [at a scheduled council meeting] tomorrow night”.

The mid-2016 decision was taken as part of the council’s acceptance a $12 million co-funding deal for city cycling infrastructure with the State Government.

The consultation did not survey motorists, although responses to a separate questionnaire, sent to RAA members in December 2016, were also included in the report.

Many RAA members who responded (41 per cent) were uncertain of their opinion of the current bikeway infrastructure on Frome Street. Some were happy with it (25 per cent) and some were unhappy with it (33 per cent).

The results became more definitive when RAA members were asked directly whether they supported returning the street to two lanes: 54 per cent supported the idea; 14 per cent opposed it. 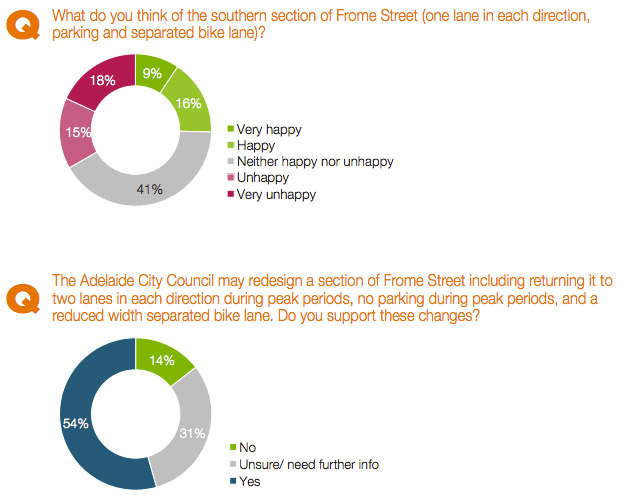 Results from the RAA members survey.

Both the Intermethod consultation and the RAA survey have drawn furious rebuttals from both sides of the Frome Street debate within the city council.

Area councillor Anne Moran told InDaily it was inappropriate to consult on whether to return two lanes of traffic to Frome Street, since the council had already resolved to do so.

“The consultation was fatally flawed from the beginning,” said Moran.

She said the consultation report “doesn’t concern me at all” and that she was confident, despite the results, that residents and businesspeople in the area wanted the street returned to two lanes of peak hour traffic.

She said “the sort of person that responds” to a consultation such as that performed by Intermethod were more likely to want the bikeway to be retained – and people less likely to hold that view were less likely to respond.

Moran dismissed the results as “almost akin to push-polling”.

“I don’t respect the consultation results,” she said.

“I am 100 per cent sure that we are going the right way and I’m sick of this over-consultation.” 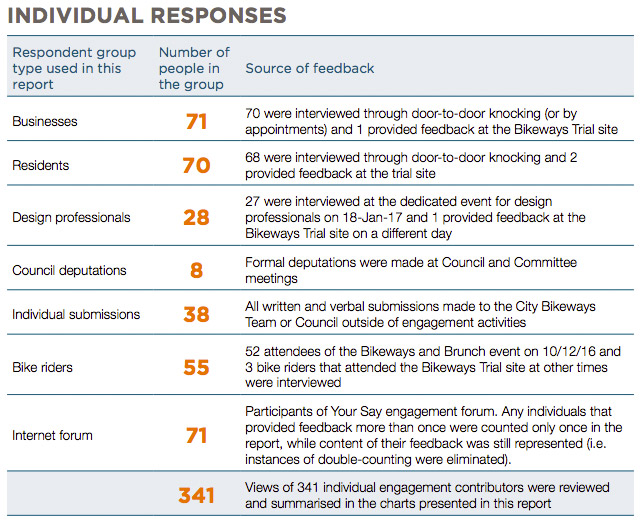 A breakdown of the responses to the official consultation.

On the other hand, North Ward councillor Phil Martin told InDaily he was disappointed the RAA survey results, which he said lacked credibility, were included in the report.

He said the RAA member survey was “akin to asking the international matador association how they feel about pulling down bull rings”.

“I’m really disappointed that without advice to councillors, the survey conducted by what RAA was included in the [report to council].

“The survey has been included to muddy the waters.”

He said the council-commissioned consultation had shown returning Frome Street to two lanes of traffic in both directions had been “utterly rejected by the community”.

InDaily contacted all city councillors for comment this morning.