We’ve compared the number of vehicles registered in South Australia to the number of fines issued to drivers (and motorcycle riders) over the past six months.

If everyone were equally likely to be caught breaking the law, every make of vehicle should attract the same, or a very similar proportion of fines.

An InDaily analysis of State Government data shows that the drivers most likely to receive expiation notices for traffic offences in South Australia choose Audi.

The list above ranks each make of vehicle by the number of fines that were issued or paid – between July 2016 and January 2017 – divided by the number of current registrations for that make in South Australia.

For a closer look, here’s the same list, graphed to show the percentage of expiations by registration. 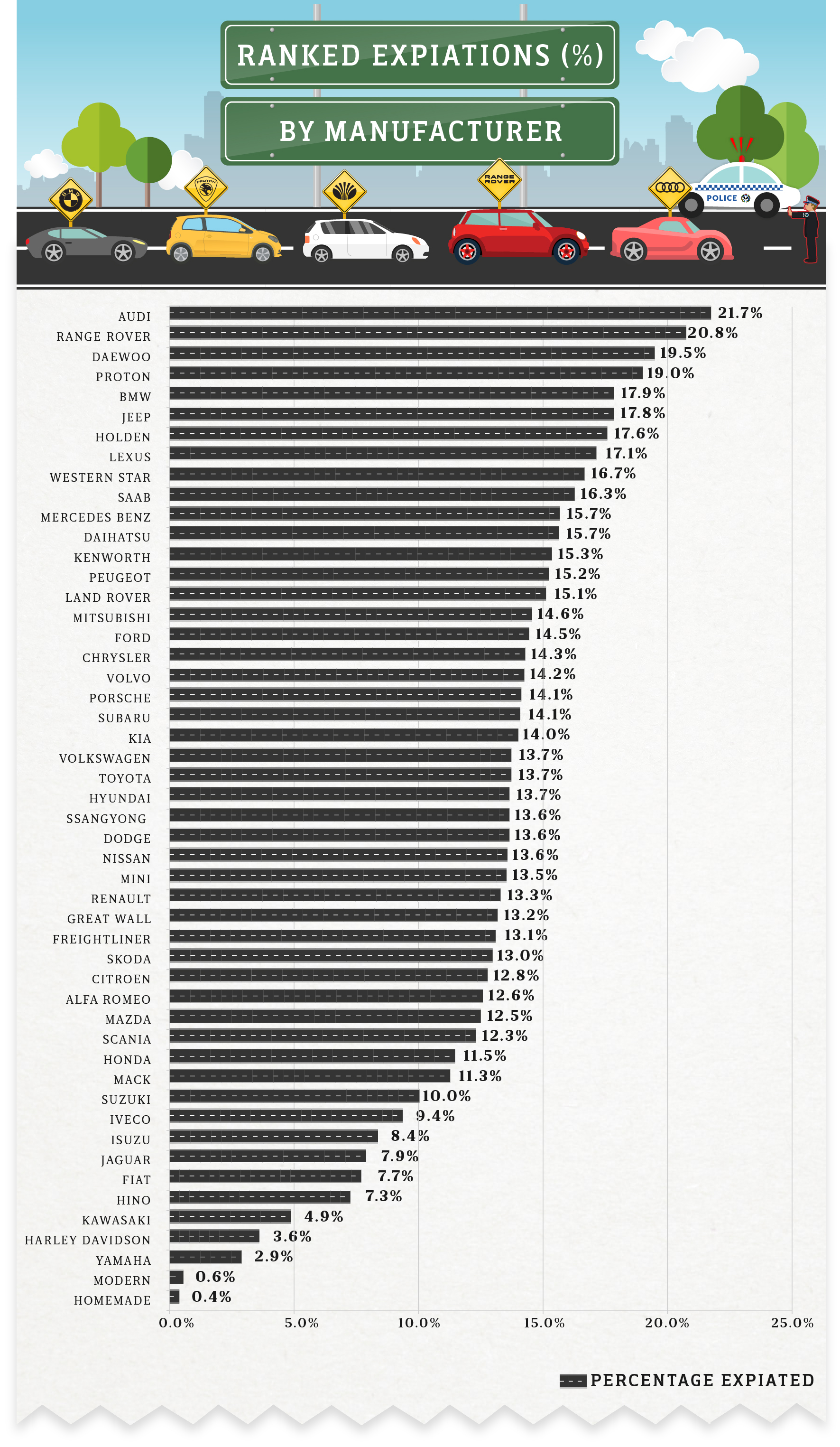 A few conclusions can be drawn from the rankings: 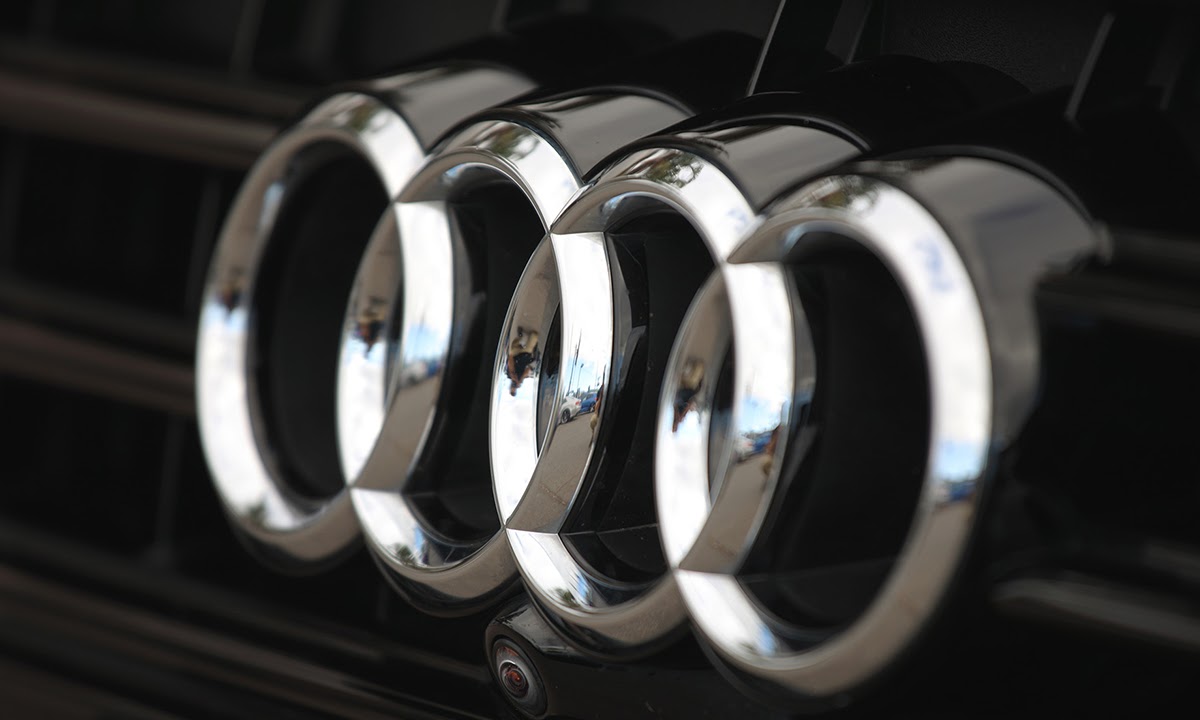 As InDaily reported earlier this month, the most common expiations recorded against South Australians are for exceeding the speed limit, owning or driving an unregistered vehicle and running a red light.

Considering the raw numbers, the top three registered makes in SA were:

And the top three makes for expiations were:

As it happens, most of the fines were issued to drivers of white or silver vehicles.

We don’t have data on how many cars of each colour are registered on South Australian roads – so read into this what you will. 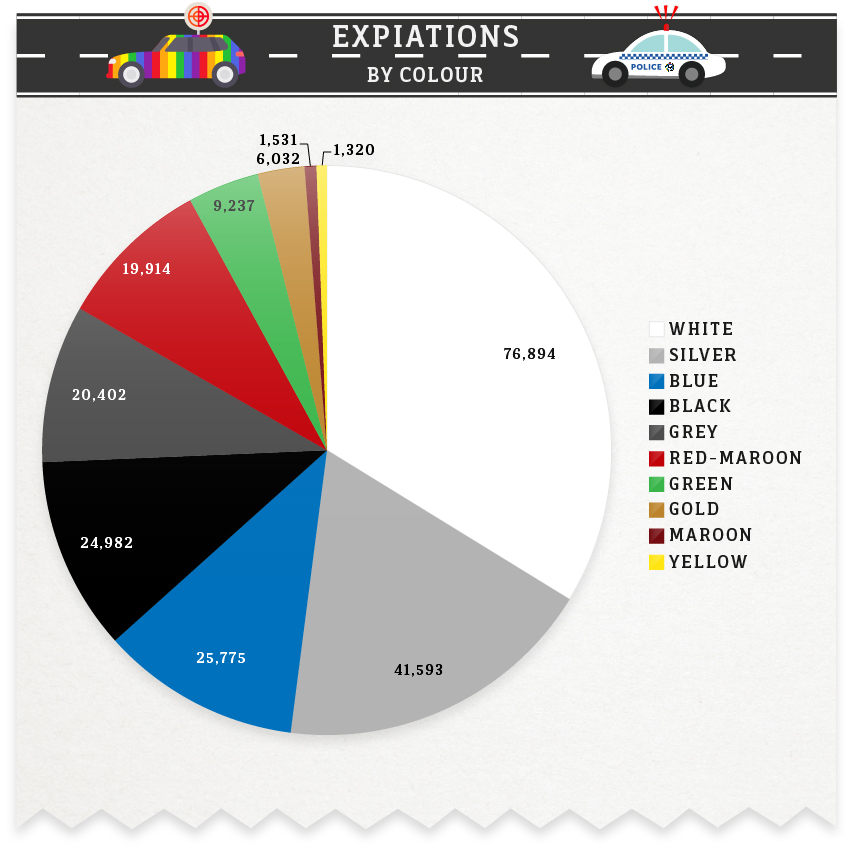 Importantly, the expiations data does not disclose how many individual drivers were fined.

It only says how many expiations were issued and expiated against drivers of particular types of vehicle.

So it’s possible that our conclusions could be affected by a number of repeat offenders during the six month period.

InDaily excluded all of the expiations that were later withdrawn by police as we were calculating the rankings at the top of this story.

To ensure we would only draw conclusions that were statistically significant, we also excluded makes of vehicle with fewer than 100 registered vehicles in South Australia and/or where fewer than 100 expiations were levied against drivers of those vehicles.

But the latter category contains some interesting tidbits:

If you own one of the 704 Vespas registered in South Australia, you’re pretty unlikely to get caught out.

Just 14 fines were issued or expiated during the six month period.

Of this group, the highest proportion of fines (17.5 per cent, or 25 expiations for 143 registered vehicles) were issued to Maserati drivers. Maserati mostly manufactures luxury sports cars, but also some SUVs.

The lowest proportion (5.4 per cent, or 12 expiations for 223 registered vehicles) was for Rolls Royce drivers.

You can find the expiations data for this story on the Data SA website.