Until now, the not-for-profit foundation has been entirely funded by Zonfrillo (its founder and board director) and his Orana restaurant, working with around 30 Indigenous communities.

He says the grant – to be announced in the 2016-17 Mid-Year Budget Review tomorrow – will enable it to expand its work, including building an online database of native foods, establishing a facility to analyse ingredients, and launching a hub to support cultivation projects and the marketing of products.

“It [the funding] is great news for us,” Zonfrillo said.

“The foundation has the potential to do a lot more in each community and touch a lot more communities.”

The State Government said the $1.25 million would help create new jobs in food science and research, promote SA as a centre for food innovation and benefit Indigenous communities.

Premier Jay Weatherill said losing the knowledge about native foods held within Indigenous communities would be a tragedy.

“By supporting the Orana Foundation we can help preserve this knowledge and commercialise native foods by developing product lines and markets both in Australia and overseas for those products.”

Orana, Zonfrillo’s flagship restaurant in Rundle Street, has developed a reputation for its extensive use of native ingredients.

“There are some ingredients we use in Orana that should absolutely, categorically be on the supermarket shelf, such as Geraldton wax … Aboriginal people have been using it to stuff fish for 60,000 years,” Zonfrillo said.

“Something like that really took off in Australia as a cut flower in the cut flower market … we use it in cooking like you would use a herb.”

The $1.25 million government grant will help the Orana Foundation create an open-source database to share information about native foods.

It also plans to set up a research and development facility, to be known as the Australian Food Culture Enterprise, which will analyse ingredients to assess their nutritional information, explore how they have traditionally been used, and look at how they might be used in contemporary cooking.

Zonfrillo said the foundation was currently working on securing a location for the enterprise.

“We’re trying to work out the most economical way of doing it so we can share resources, share tools … in an ideal world it would definitely be based at one of the unis.”

It is intended that an Innovation and Enterprise Hub will be sited at the same location, with its function being to support product cultivation, skills and leadership training, and the market development of products in ways that will benefit Indigenous communities.

Zonfrillo hopes to get the facilities up and running as soon as possible next year. 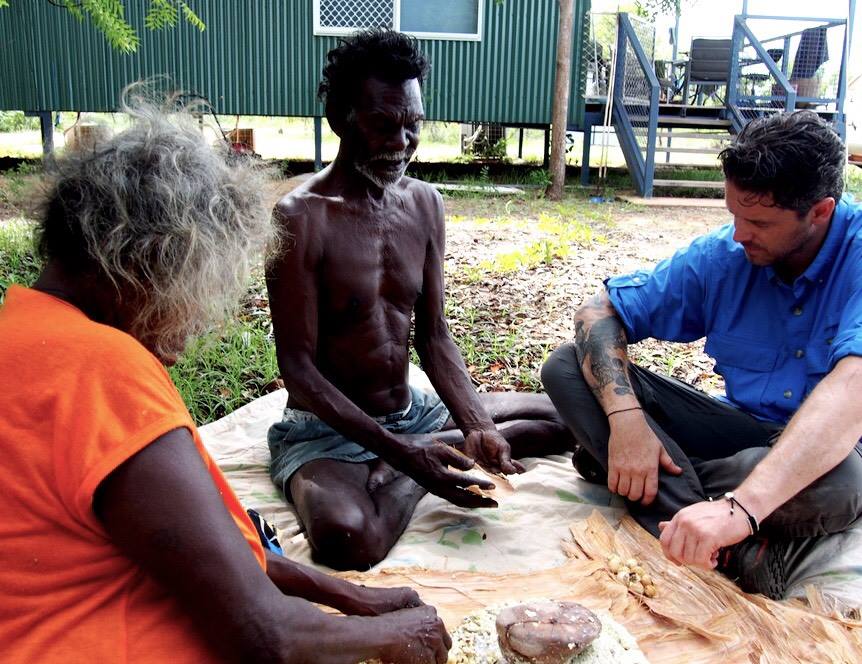 The chef and restaurateur – who also owns Blackwood and the Nonna Mallozzi food truck – says among the native ingredients he has been introduced to through his visits to Indigenous communities are Moreton Bay fig shoots (“they have this amazing sort of coconut aftertaste – it’s really quite incredible”) and pandanas fruit. Orana ferments the pandanas, which results in two different products – an acidic liquid used in place of base vinegar and a puree with a tropical flavour.

“Learning the cultural aspects of a lot of the ingredients is a key to understanding them and what we can do with them.

“I think it’s fair to say that globally Orana is pretty well-recognised restaurant these days and that’s due a lot to the ingredients we use and how we use them and the only way we’ve been able to do that is by going out into communities and learning from the people and understanding the nutritional value, traditional uses, how they’re connected with their culture and the land.

“To me, that knowledge is incredible and I knew there had to be something more we could do, not just the restaurant … I felt we owed more to this culture of Australia to try to preserve what was left.”

And it’s possible, he said, that the research may just uncover the world’s next “superfood”.

“There are 20,000 edible plants in Australia. When you ask how many have really been looked at closely, it’s very few, so it stands to reason just on a numbers game factor that among our ingredients native to Australia is perhaps the next goji berry or acai fruit just waiting to be realised.”