The Myanmar Snakebite Project began in late 2014 when the Australian Department of Foreign Affairs and Trade (DFAT) awarded the University of Adelaide $2.3 million for a three-year project, which is a partnership between the Australian Government and the Myanmar Ministries of Industry & Health.

Two years on, a visit to Adelaide by Myanmar Union Minister of Industry U Khin Maung Cho has helped boost the profile of the project and strengthen ties with South Australia.

Total merchandise exports to Myanmar in 2015-16 were $4.562m and this is expected to grow as South Australia’s engagement with the region continues.

The Minister used the visit in late November, hosted by the State Government, to learn more about the project, the world-class snake venom facilities in South Australia and also to find opportunities for collaboration. 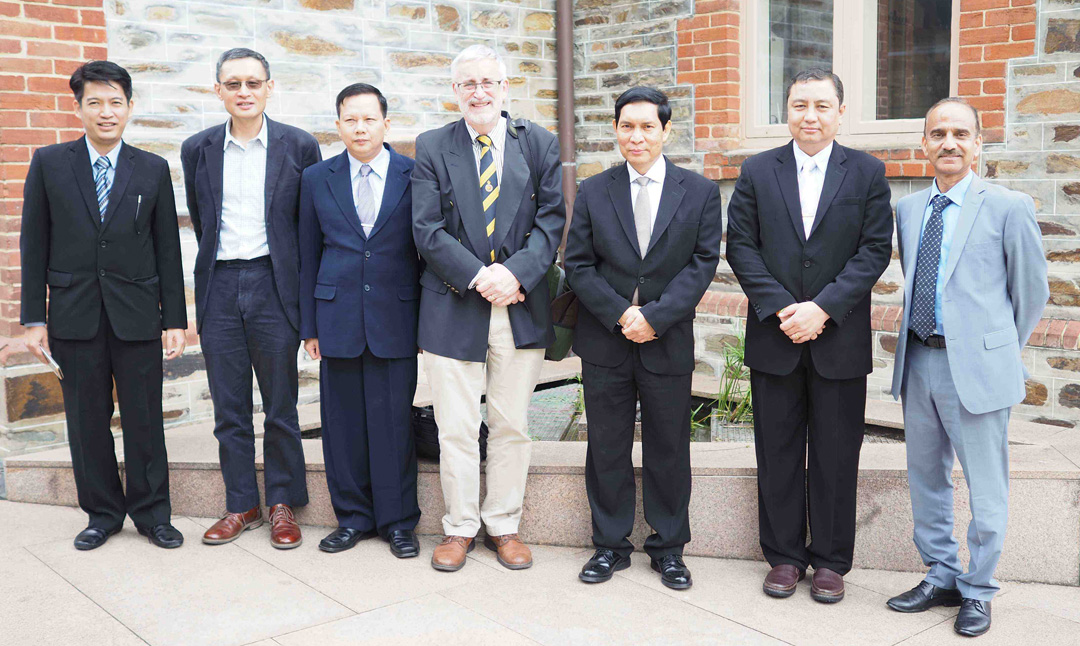 Snakes, primarily Russell’s Vipers and Cobras, bite thousands of people in Myanmar every year and lead to hundreds of deaths. They are a major concern in rice growing regions along the country’s biggest river the Irrawaddy.

Dr Peh said the project adopted a holistic three step approach that included increasing the quality and quantity of anti-venom supplies produced in Myanmar, establishing reliable distribution networks and educating health workers and the general population about how to treat and prevent snakebites.

He said the recent visit by U Khin Maung Cho had also presented new opportunities for collaboration with Myanmar, particularly in the areas of natural resources, agriculture and health.

“The meetings suggested there were a few things South Australia could assist with including renewable energy, waste management, recycling and water management,” Dr Peh said.

“We can use this as a bridge for South Australia to spruik its capabilities to Myanmar.

“Now the ball is in our court and we need to chase that up.”

Horses are used in Myanmar to produce antibodies to make antivenom for Russell’s Viper and Cobra bites.

Since the snakebite project started, horse mortality has been reduced by 90 per cent while antivenom production has more than doubled to almost 100,000 vials a year.

Thirty solar-powered fridges have been purchased to store antivenom in remote areas in Myanmar and thousands of rural families have been educated about how to avoid being bitten and what to do if they are.

Dr Mahmood said South Australia was also well placed to share its health expertise with the nation of 55 million people beyond the snakebite project.

“We have the skill set and there is also a huge potential to collaborate on the health side of things with the development of hospitals, health services training, hospital maintenance and it goes on.”

The project has so far focused in the region of Mandalay, the biggest rice growing region and one of the worst affected by snakebite.

Although not as deadly as some Australian snakes, Russell’s Viper is a particularly dangerous snake because of the devastating impact its venom can have on the kidneys.

Up to 70 per cent of acute kidney failure in Myanmar is due to snakebite, placing a major strain on the country’s underdeveloped health system.

Professor White, one of Australia’s pre-eminent toxinologists, said simple steps such as encouraging farmers to wear boots and seek help quickly from health care workers rather than relying on traditional healers could make a significant difference.

He said the scope of the snakebite problem would become apparent as data was collected throughout the project beyond what was captured at major hospitals.

“We don’t know the real figures for Myanmar yet, the official figure is 600 deaths and 13,000 cases per year but we think that figure will increase by a factor of between two and five once we’ve got more accurate data,” Professor White said.

“We are on track that by the time our current funding arrangement with DFAT finishes, the anti-venom production will be meeting the entire national need, the distribution will be sorted out so it gets to where it is needed and we will have assisted in teaching master trainers to provide sustainable ongoing training for all staff levels within their health system.

“Myanmar has a production capacity and thanks to our input and their hard work they have the potential to produce more anti-venom than they need so they could eventually become an exporter in the region.”

Solstice Media has partnered with the South Australian Government to provide information about our state’s international connections and engagement.