Two years after Southern Cross Austereo rebranded its venerable SAFM station as hit 107, the music station has knocked off its long-term nemesis Nova 91.9.

It’s a stunning turnaround for hit 107, which less than two years ago was languishing with rock bottom ratings, only outrating the likes of Radio National and Classic FM.

Since then, patient station management have seen a steady improvement, thanks to solid daytime numbers, a popular drive program, and steady improvement in breakfast, where Amos Gill, Cat Lynch and recently arrived Angus O’Loughlin have edged out Nova’s Dylan Lewis and Shane Lowe.

Southern Cross Austereo will also be happy with the showing of its other Adelaide station, Triple M, where its drive program has extended its lead over FIVEaa in the battle for sports listeners.

Overall, it was a forgettable survey period for Mix102.3 and Nova, with both stations losing listener share. Nova lost listeners in every shift. Mix held its own in its popular mornings program, but tanked in the evenings, plummeting a massive 4.6 percentage points, and losing 2.4 percentage points in drive.

Mix still leads the pack, but its lead has been shaved again. 891 ABC has clear air in second place, followed by a bunch of stations jockeying for position.

Hit 107 is the surprise third placegetter, followed by Nova and FIVEaa in equal fourth, and Triple M just a hair’s breadth behind. 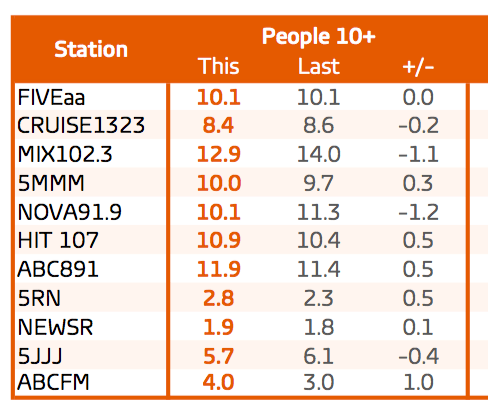 In the key breakfast shift, FIVEaa’s Will Goodings and David Penberthy had a strong survey, leapfrogging Mix’s flagging Jody Oddy and Mark Soderstrom, into second place.

However, ABC veterans Abraham and Bevan also increased their audience share, enjoying a 16.8 per cent slice of the audience, and rounding out another year on top of Adelaide’s ratings pile.

891 had a good survey across the schedule, with retiring drive presenter Ian Henschke finishing with a respectable 10.9 per cent share, out-rating FIVEaa’s sports duo of Stephen Rowe and Mark Bickley.

The survey period, which straddled the end of the AFL season from September 25 to December 4, shows Triple M sports presenters Dale Lewis and Andrew Jarman extending their lead over their FIVEaa sports rivals, who lost share.

FIVEaa’s drive numbers are now sub 10 per cent – only just ahead of Triple J and Cruise.

Drive and weekends were the sore spots for FIVEaa, which otherwise enjoyed solid performances across the weekday schedule.

The demographics may be one reason why it was keen to entice veteran Jon Blake back from Triple M: his smart comedy is likely to pull in some younger listeners.

It’s been an up and down year for Mix, which would nevertheless be happy to finish the year holding on to first place after a soft start. 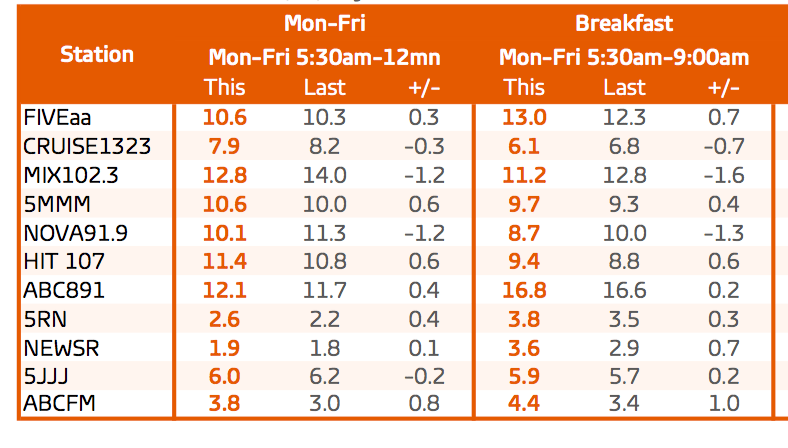