In the first six months of 2016 there were only five more burst water mains than for the same period in the previous year.

Despite the flatlining figures, this period coincided with an intense local media campaign about an alleged epidemic of burst water mains, with The Advertiser dragging a cardboard cut-out of under-fire Water Minister Ian Hunter to incidents.

However, the comparative performance of the system did decline in the second half of the year.

New SA Water figures show the increase in bursts coincided with record rains and floods through winter and into spring. 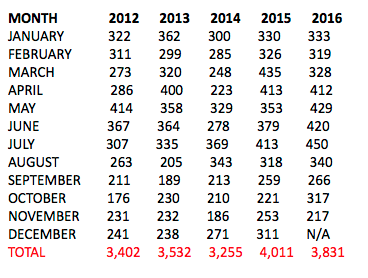 The 2015 and 2016 figures are higher than the three previous years, but well below the 2008-10 period when the drought led to the total number of burst water mains topping 4300 each year.

SA Water says the fluctuations in the figures reflect climatic conditions impacting on Adelaide’s highly reactive clay soils, with the increase in 2015 put down to very dry conditions.

“In fact, inflows into our reservoirs in that year were comparable to the last big drought in 2008-09, where we also saw a spike in the number of water main failures,” an SA Water spokesperson said.

In the last half of this year, the opposite occurred, with record-breaking rains drenching the state in winter and spring.

“Over the last few months South Australia has received extremely heavy rainfall, many locations across the Adelaide metropolitan area and the Hills region saw record-breaking rainfalls,” the spokesperson said. “This has had a slight impact to our water main incident rates in the second half of the year.”

SA Water said the water main network had grown by more than 5 per cent – or more than 1300km – over the past 10 years while the rate of bursts had remained “relatively steady”.

Earlier this week SA Water announced it was spending more than $4 million on “smart technology” to better manage the water network in the CBD.

The plan included the installation of flow, pressure and acoustic leakage sensors to provide real-time feedback about the water network, allowing SA Water to detect and address problems more quickly.