Tucked away in Little Gilbert Street is an unassuming building distinguishable only by four white minarets. This is the oldest mosque still in use on the Australian mainland, and the first to be built in an Australian city.

The Adelaide Mosque was completed in 1889, serving as a spiritual meeting place for the Muslim cameleers who were working in the outback north of Adelaide and stopping here in between jobs or trips.

Referred to collectively as ‘Afghan’ by the dominant British-Australian population at the time, Muslim cameleers actually came from Afghanistan, Balochistan and areas of north-west India (now Pakistan). The first migrant cameleers were brought out by Elder & Co. with 124 imported camels to work at Beltana Station, north of Port Augusta, in 1865. 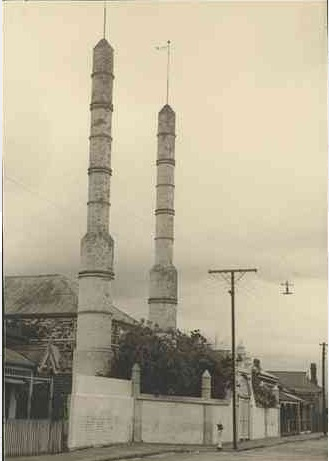 The Mosque pictured in December 1928. Image courtesy of the State Library of South Australia SLSA: B21920, No known copyright restrictions

Other migrant cameleers followed and, with their camels, provided transport for explorers, the growing wool industry and stores in the Outback. Muslim cameleers played a vital part in building the Overland Telegraph Line from Darwin to Adelaide, completed in 1872.

The distinctive minarets were not added until 1903. The surrounding garden had grown by then, and was described in detail that year by The Advertiser: ‘The mosque is situated in a garden filled with flowers of all colors, and the effect is enhanced here and there by evergreen trees. On one side of the mosque are a number of cottages, around which vines have been trained, with the result that they appear very picturesque.” 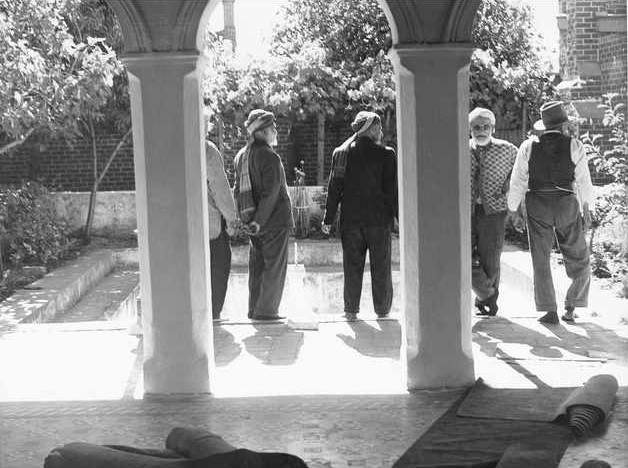 View through arches of Adelaide Mosque to garden and pool in 1937.
Image courtesy of the State Library of South Australia, SLSA: B 7286, Public Domain

While some cameleers moved on following work in Australia and elsewhere, and others returned to their country of origin, others settled in South Australia becoming part of the community. Many of the Islamic community in Adelaide lived in the south-west corner of the city, near the mosque that played such an important role in Muslim lives.

In the subsequent years, the mosque fell into disrepair.

Post-war migration from Europe and Indonesia rebuilt the Muslim population. Bosnian migrants in 1952 found “ancient turbaned men’, the youngest aged 87 and the oldest 117 years, still living in its decaying shelter. The younger men, who cared for the old cameleers until they died, took on the task of restoring the mosque.

The Adelaide Mosque again became a place of prayer, this time for Muslim migrants from Lebanon, Pakistan, Indonesia, Malaysia and areas of the former Yugoslavia.

It is still used today, and it also serves as a reminder today of the pioneering spirit of the original cameleers.

‘Time and place’ is a new series about significant places in South Australia, brought to you by a partnership of InDaily and the History Trust of South Australia.