In recent years the company has made a major investment in solar power and efficient equipment and has reaped the benefits.

“In the first year where it was monitored we saved 35% of the energy that we originally used,” said managing director Ulli Spranz. “With better knowledge of most efficient usage and increasing installation of additional features, we have been able to further increase our savings.

“There were also water savings because we changed our clean-in-place system and installed a foaming system that uses less water. We wouldn’t be where we are if we hadn’t put all that together. It was a huge project.”

From the moment Ulli and husband Helmut built a processing plant alongside their 100-hectare farm near Meadows they were looking to install solar panels to provide as much of their power needs as possible.

It took a few years until a solar system with the reliability needed for the time-sensitive demands of producing milk, yogurt, butter and cheese became available, but when it did the company didn’t hold back, covering all available roof space with a 100kW PV array for power and a 260kW evacuated tube system for hot water.

It was able to access a Clean Energy Grant to help cover the costs, but the commitment in both money and time got bigger as it sought to “optimise the system’s capabilities into the future”.

“We did a full energy-audit to identify our requirements followed by monitoring over a period of time to identify where we could maximise our current efficiency and potential savings into the future,” Ulli said.

“We identified the need to install new equipment that would work more efficiently, such as a better cooling system and a new, high-tech pasteuriser, and we installed a power factor corrector to utilise solar power more efficiently. All those individual pieces needed to be put together to achieve optimal efficiency and the best outcome.”

The hot water system is so effective that it can provide large quantities of water over 80 degrees even when it is cloudy in the Adelaide Hills. 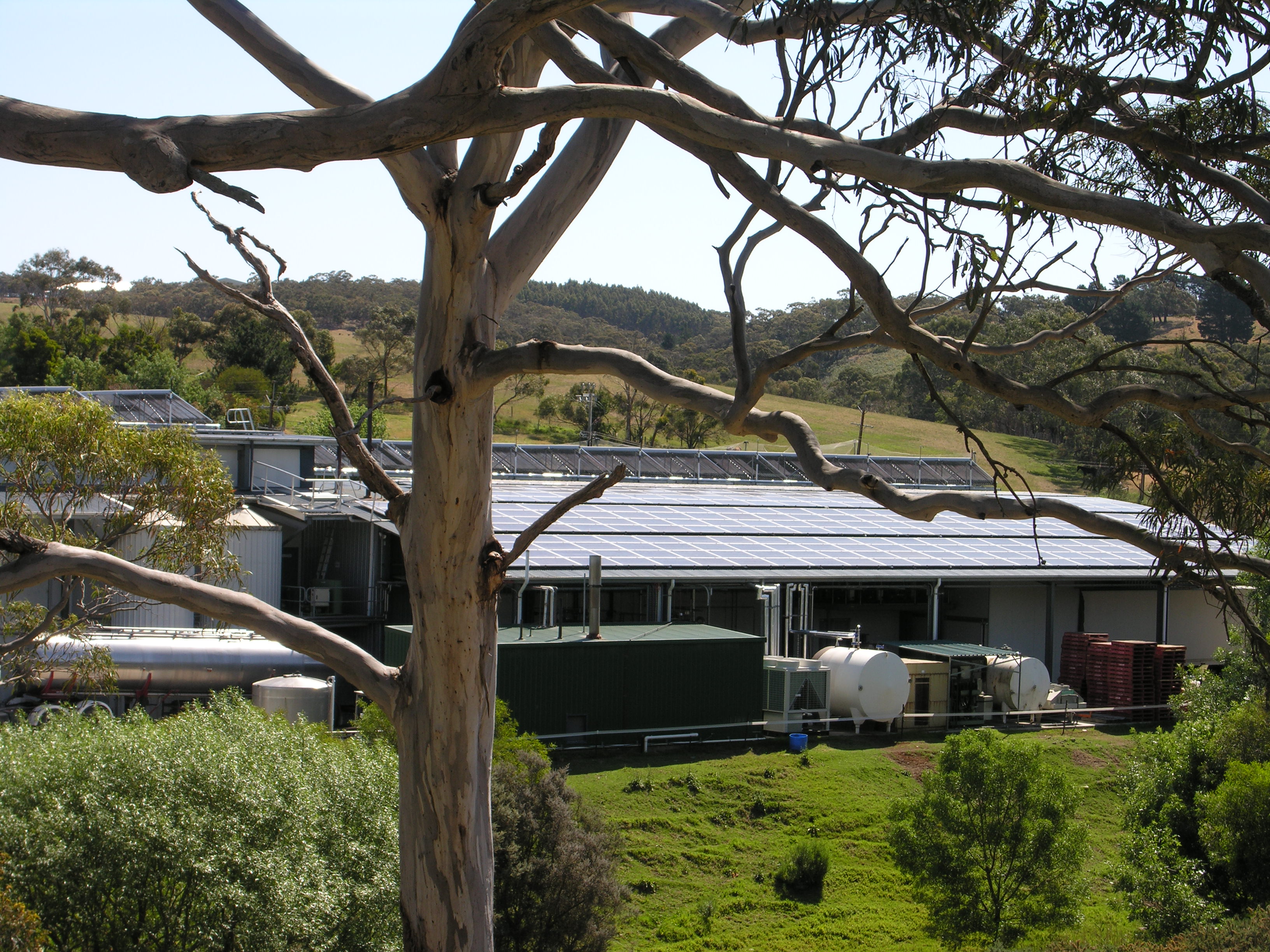 The company has shown equal foresight in other areas of its environmental commitment. Immediately after buying the original farm, for example, it installed concrete holding tanks for the dairy effluent and converted it to biodynamic liquid fertiliser.

The tanks were designed to be large enough to cater for the processing plant they knew they would build at a later time, and the choice of the right cleaning detergents meant the processing wastewater could be used for irrigation as well.

Now more is in the pipeline, with B.-d. Farm Paris Creek in the midst of a $7 million expansion that will double its production capacity and its roof space. The State Government provided a $900,000 Regional Development Fund grant to support the project, which will create 13 new jobs immediately and likely more to follow.

Much of the money is being spent on new and more efficient equipment, including a state-of-the-art system capable of switching from normal milk to extended shelf life (ESL) products. The company will be one of the few in Australia capable of ESL fresh milk production, which will be used mainly for products for interstate and export markets.

Despite Adelaide’s wet and windy winter causing some delays, the new production area and equipment should be ready for use early next year. Buyers already are waiting for the expanded output and local farmers have organic milk to sell. The company has committed to paying them higher than usual prices even though some supplies currently are being used in the newly founded Adelaide Hills Dairies brand.

“In a truly biodynamic-organic production facility we have an ethical approach to everything we do,” Ulli said.

“We look at eliminating food miles as much as possible, we are eliminating harmful chemicals from the farming land, we look at preventative methods in herd management, and we support local producers.

“Naturally, in commercial manufacturing companies look for profit. However, our approach is that everybody needs to survive in the entire system, all stakeholders are important and we need to ensure that everybody gets their fair share to move sustainably into the future.”

Solstice Media has partnered with the South Australian Government to provide information about the transition to a low-carbon economy. Read more stories like this here.