As Liberal leader Steven Marshall this morning intensified his position against proceeding any further with planning for a future high-level repository, and days after a citizens’ jury flatly rejected the proposal, McBride said: “Between the Liberals and the citizens’ jury, the thing is dead.”

His resignation that “realpolitik” would not allow any further investigation of the plan – which a royal commission had estimated would pump billions of dollars into the state’s economy – followed the Opposition Leader unilaterally withdrawing his party’s support ahead of a partyroom meeting on Monday.

After flagging his position in The Advertiser this morning, an emboldened Marshall went further in a morning media conference, declaring: “Jay Weatherill’s dream of turning South Australia into a nuclear waste dump is now dead.”

The Premier himself derided the response of Marshall – who only this week toured the site of the under-construction Onkalo storage facility in Finland – as “panicked and opportunistic”.

But he refused to concede the project was doomed, reiterating that the Government would assess the fruits of a broader community consultation before deciding a path forward – prompting Marshall to declare the issue a key election battleground.

“Quite frankly, I’m very pleased with this decision,” the Liberal leader said.

“I think this will now become the defining issue for the 2018 state election… Jay Weatherill wants SA to become a nuclear waste dump – I have much greater ambition for the people of this state.

“I think he’s made it clear he wants to take this to the next election, and if he wins I assume that means we’ll be having a nuclear waste dump. I’m quite convinced the people of SA do not want that, but let’s wait and see what happens in 2018.”

This has got ‘State Bank’ written all over it

Crucially, Marshall today stamped his authority on the partyroom decision, saying: “We’ll have our discussion on Monday [but] I’m quite confident we’ll make a decision that we won’t support any further investigation of this proposal.”

“This has got State Bank written all over it… there are so many hurdles for this project to be successful.”

But Marshall’s manoeuvre today appears to have imposed an insurmountable one, though he was clear the “death knell” was sounded by the decision of the citizens’ jury – a process he has consistently derided.

“It was Jay Weatherill who placed a lot of store in the citizens’ jury process, and has been absolutely smacked in the face,” he said.

“The citizens’ jury overwhelmingly said they didn’t support this project for SA.”

At least one member of his partyroom concurred publicly today, with frontbencher Duncan McFetridge invoking the shock election of Donald Trump in the US this week as a warning against ignoring grassroots opinion.

We’ve got a lot to learn from America

“You’ve got to listen to the people, and they’re not in favour of it,” McFetridge said.

“We’ve got a lot to learn from America.”

But McBride, one of the staunchest public advocates of the waste dump proposal, did not criticise the Liberal Party for blocking what he said was “something that’s fairly visionary and, yes, controversial”.

Instead, he blamed the Government’s decision to “put it into the hands of the citizens’ jury”, saying it was “far too complex an issue to ever go to a jury process”.

“Now they’re bound by that… that’s what the Government committed to – they’ve now got the outcome, and the outcome’s pretty clear.”

He said the fact that “everybody I’ve spoken to about the indigenous position” pointed to an “immovable” opposition to the repository was “a sad indictment on our history”, and suggested a fundamental lack of trust in the political process.

“With the process that’s been applied, it’s going to be exceptionally hard to have bipartisan support,” he said.

“To be fair to the Liberals, they never came out and fully backed it, but they’ve clearly rejected it… between the Liberals and the citizens’ jury, the thing is dead.

“I’m not happy about it, but we’ll have to live with it.”

McBride said that “having put it in the hands of the jurors, the realpolitik of this is the only way it would have got up was with the absolute support of both sides of politics”.

“It was always a long shot,” he said.

“I think my regret is we didn’t get to the next stage – there was a lot more we needed to investigate, we hadn’t even started to look at whether there was a market, but we’ll probably never know now because it’s probably become too hard in the ‘real politics’ of SA.” 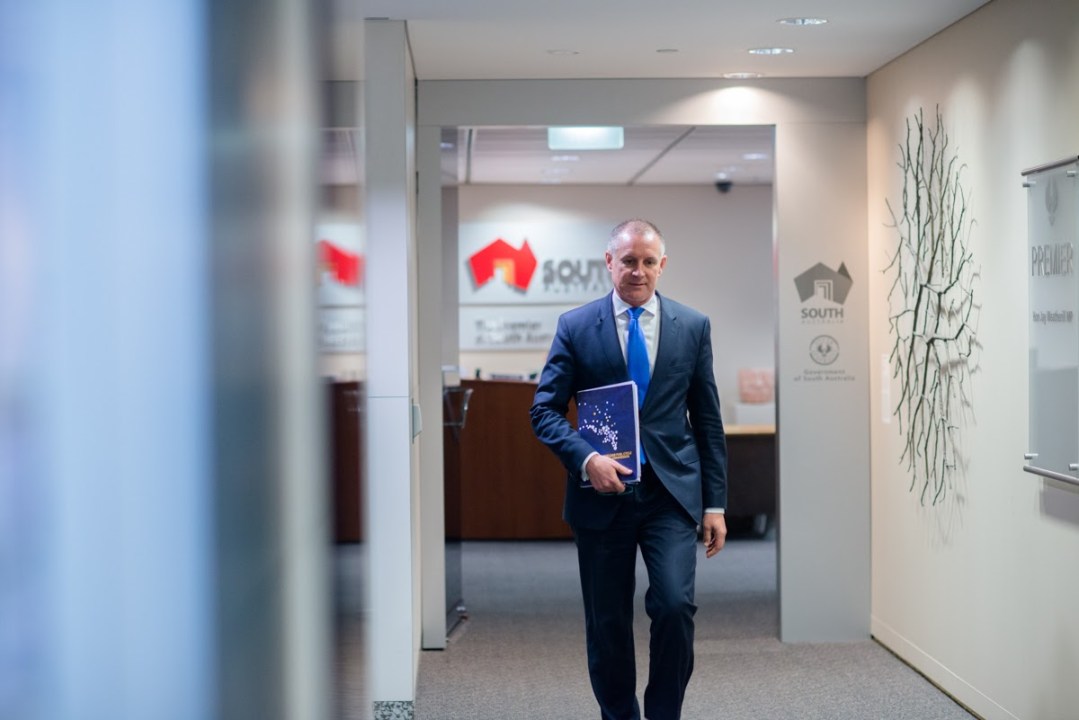 Weatherill, though, was today sticking to his mantra of “respecting” the broader community consultation process.

“We still have very considerable material to be considered and discussed… the Labor Party has not yet determined its position,” he said.

However, he conceded, “it’s obviously material what the Leader of the Opposition has said today”.

“The Leader of the Opposition is opposed, and we expect the opposition of the Liberal Party, to any further steps along the nuclear fuel cycle.

“We always said bipartisanship is an important part of progressing any further steps in this area… we’ll now obviously take into account the attitude of the Leader of the Opposition.”

Weatherill, too, sought to place the consultation process into the broader context of community disengagement, as witnessed in the US election result, insisting “you need a very secure form of community consensus” to proceed with such a proposal.

“The way I see this process is there are experts, but the experts ultimately have to be subordinate to the commonsense judgement of everyday South Australians,” he said.

“This is a challenge for not only our democracy but democracies around the world, there’s a massive lack of trust in experts – and I include the political class.

“These are the big challenges for the way we make decisions about complex issues.

“It’s an experiment in democracy, I accept that… and there will be steps forward and steps back.”

He said the process had to “use experts not to dictate to citizens but to be servants of citizens so they can arrive at that judgement”.

“There is a challenge between appearing to be an advocate for it, and supplying all the information and letting people make up their own mind,” he said.

“We’ll be making our judgements about the next steps soon.”

In coming down strongly against the nuclear waste dump, Marshall lurched between damning it as a Labor “Get Rich Quick” scheme and “some pipe dream about what will happen by 2090 in SA”.

Despite praising the Finnish project, he said he was “increasingly sceptical about the economics and financial risk of this project”.

“What we know from the investigation here in SA is that taxpayers were going to have to foot a bill of $600 to $800 million before a decision on this project was made,” he said.

He also pointed to the fact that Finland had been debating the benefits of nuclear storage since the late-1970s, arguing SA would not see any return from its investment for “20, 30, 40 years”.

The Liberal Party has outlined a broader framework which does go through to 2036, but it starts now

“SA needs to address the more pressing economic circumstances it finds itself in,” he said.

Asked how that should be done, he said: “We’ve outlined it in [our policy document] 2036: we’d like to see SA become a far more prosperous place, and that can be effected far more quickly than a 20 or 30 year timeframe.”

“We need long-term strategies, not short-term diversions… these aren’t plans that are going to be delivered in 2036 – the Liberal Party has outlined a broader framework which does go through to 2036, but it starts now.”