Leader Mix102.3 still has clear air at the top of the ratings, despite losing ground.

ABC 891 has taken second place, up from fourth, while a flatlining Nova has dropped from second to third.

FIVEaa lost ground overall, dropping from third to fifth, despite a strong performance in the breakfast shift, where David Penberthy and Will Goodings put on 1.5 points.

However, the long-term breakfast ratings leaders, 891’s Matt Abraham and David Bevan, also had a strong survey, putting on 1.6 points to increase their lead at the top of the breakfast pack.

hit107 has narrowed the gap on youth music rivals Nova, with increases across the schedule particularly in Drive where they have surged into the lead.

The survey, which straddled the end of the AFL season, saw Triple M’s sports show maintain the slimmest of leads over FIVEaa. Just 0.1 points separates the FM station’s Drive team of Andrew Jarman and Dale Lewis from FIVEaa’s Mark Bickley and Stephen Rowe.

In Drive, the ABC’s Ian Henschke recorded the second largest increase in audience share – only behind hit107 – with a lift of 1.9 points. While he remains in sixth place, he is within striking distance of the sports shows with one survey remaining in the year. 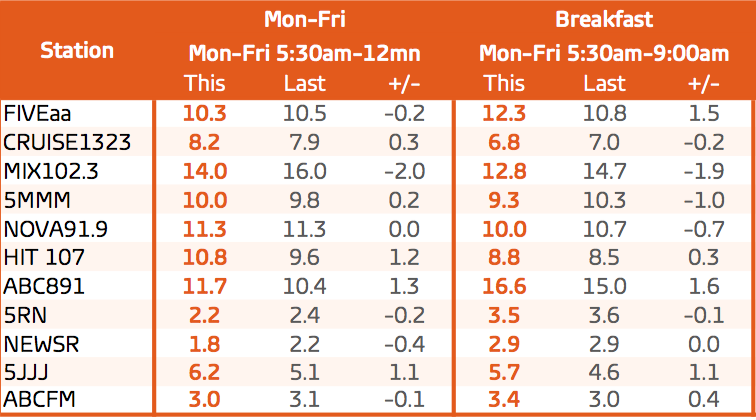 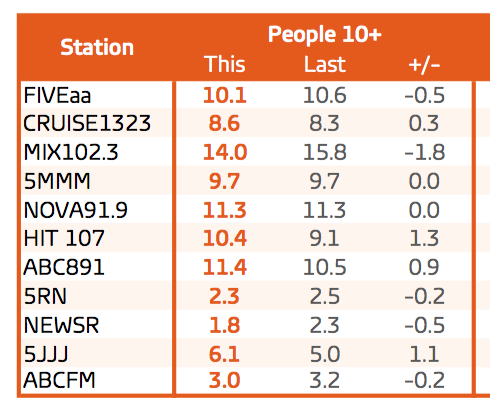