Channeling notorious American boxing promoter Don King this morning, Bignell pumped up the “hate” factor in the February 3 slugfest, claiming that the pair – who last fought each other 10 years ago – had genuine dislike for each other.

“They genuinely hate each other,” Bignell told Mix 102.3, adding that he had re-watched the pair’s 2006 fight in which “they absolutely pummeled each other”.

It’s a theme Bignell repeated during his rounds of the media this morning ahead of the set-piece announcement at Adelaide Oval involving the two boxers.

“I will be sitting between them, and at this stage I’ve got to say, I’m scared of heights but I think I’d prefer to be on the roofline, because these guys absolutely hate each other, they haven’t been in the same room for 10 years, when they fought it out back in 2006 in Sydney,” he told ABC radio.

While he was keen to add some Las Vegas hyperbole to the announcement, Bignell was a lot more cautious about the money the State Government had to pay to beat out the other state capitals who the minister claimed were also seeking the event.

“Well we can’t actually disclose that and that’s their wish and the promoter’s wish and I don’t want to have a fight with either of those blokes, but that’s the rules that every state and territory plays by. You know I’ve stood next to the Victorian Premier when he’s been asked the same question about what they paid the world cup cricket.”

He said the event would give the state an economic boost and he hoped to have 37,000 people attend the bout.

When asked if he was becoming the Don King of Adelaide he said: “Well I would have loved to have made this announcement back in the ‘90s when I had my mullet and I could have … boofed it all up and I had the big Don King hair, but I’ve got the grey, but there’s just not much of it.”

Bignell, who said he wasn’t the biggest fan of boxing, was challenged about why he was happy to spruik a fight, but was opposed to jumps racing at Oakbank.

“Anthony Mundine has the ability to make the choice of whether he goes in to face up to Danny Green in the ring; the horses don’t.”

Mundine, 41, won a points decision over Green when the pair fought in 2006. 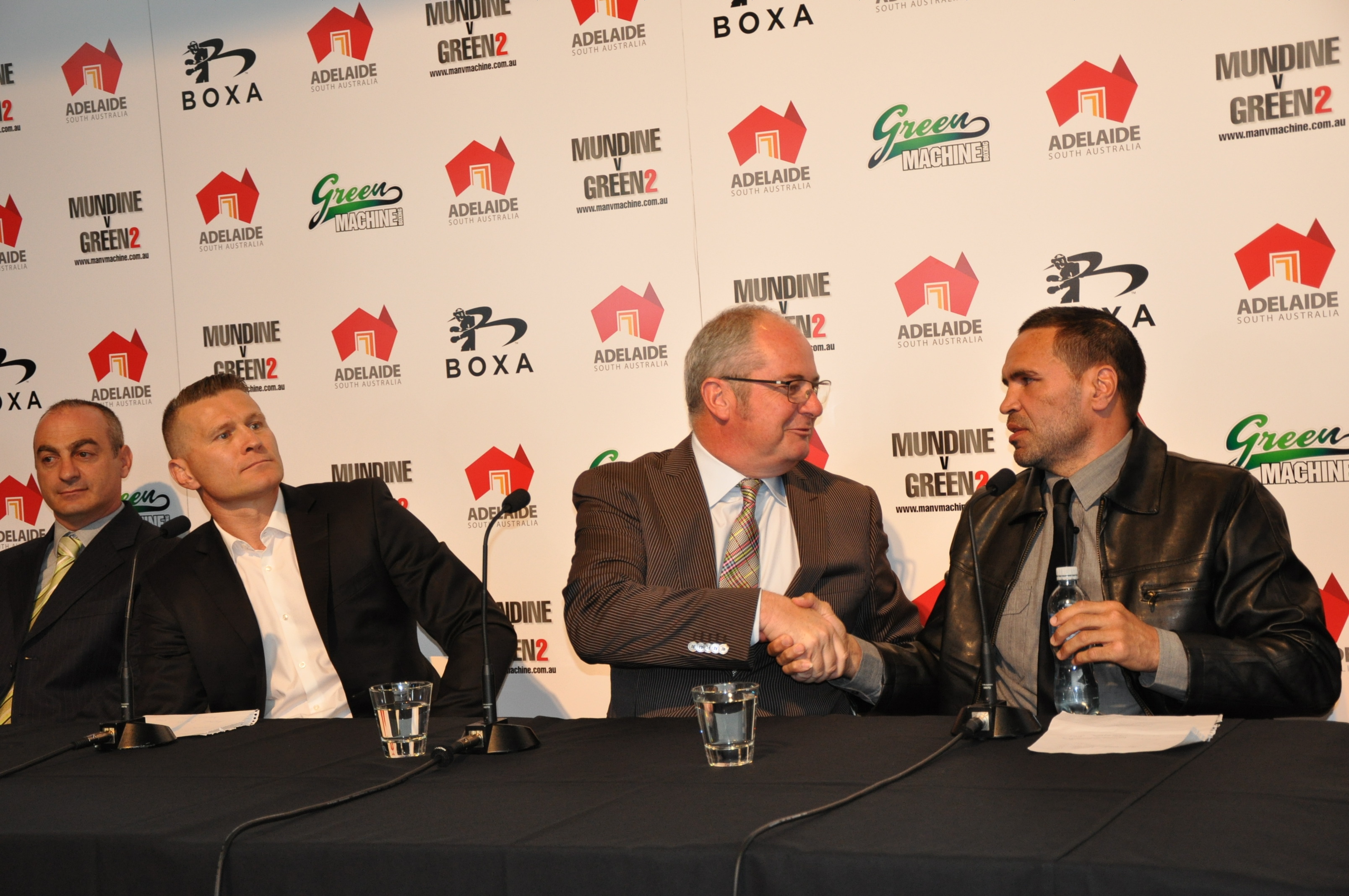 Today, Mundine predicted a win by stoppage in the rematch on February 3, saying he had overcome hip issues that have plagued his recent career.

The bout will be fought at the catch weight limit of 83kg.

“I’ve been fighting with a bad hip – a very bad hip – for the last seven, eight years,” Mundine told a press conference this morning.

“That’s fixed now. I feel my feet are back, my movement’s back.

“I just want to put this shit to rest, that I’m the better man.

Both fighters indicated the fight could be the last of their careers, with Green saying beating Mundine would be a perfect send off.

He was confident he would be able to stop Mundine.

“You hit me with everything you had with two hips. I didn’t stop marching forward,” Green said.