Robert Brokenshire, one of the party’s two South Australian legislative councilors and a former state Liberal frontbencher, today threw his hat into the ring for the casual senate vacancy, saying it was “healthy that there is more than one nominee for the position”.

The move will pit him against his former staffer Rikki Lambert, who has worked as Day’s chief of staff and media adviser since he entered parliament in 2014.

Lambert announced his candidacy yesterday, after Day made his bombshell admission that he was quitting parliament in the wake of the collapse of his Home Australia housing construction empire, lamenting that he had failed to “put in place a proper management structure for the business” when he left to pursue politics.

“I will be working closely with the liquidator and offering a proposal to enable me to find a way to pay back every debt fully, no matter how long it takes,” Day said.

It was a personal as well as professional blow for Day, who says he will lose his family home, having spent the best part of a decade pursuing his political ambition, first as a Liberal candidate in Makin, and then as a failed nominee in Mayo and running unsuccessfully for Family First in 2010 before finally winning through.

“To be honest it’s happened all very quickly [but] I would hope we’d be able to form a resolution over the weekend,” he said.

The state executive – from which Day has also resigned – will meet to determine its favoured candidate, with Hood noting “the history of our party is we’ve always made unanimous decisions and it’s very much our plan for the same outcome on this occasion”.

It’s understood there has been a third nomination from a party member based outside SA, but Hood said “the reality is it’s really Robert and Rikki who will be seriously considered”. 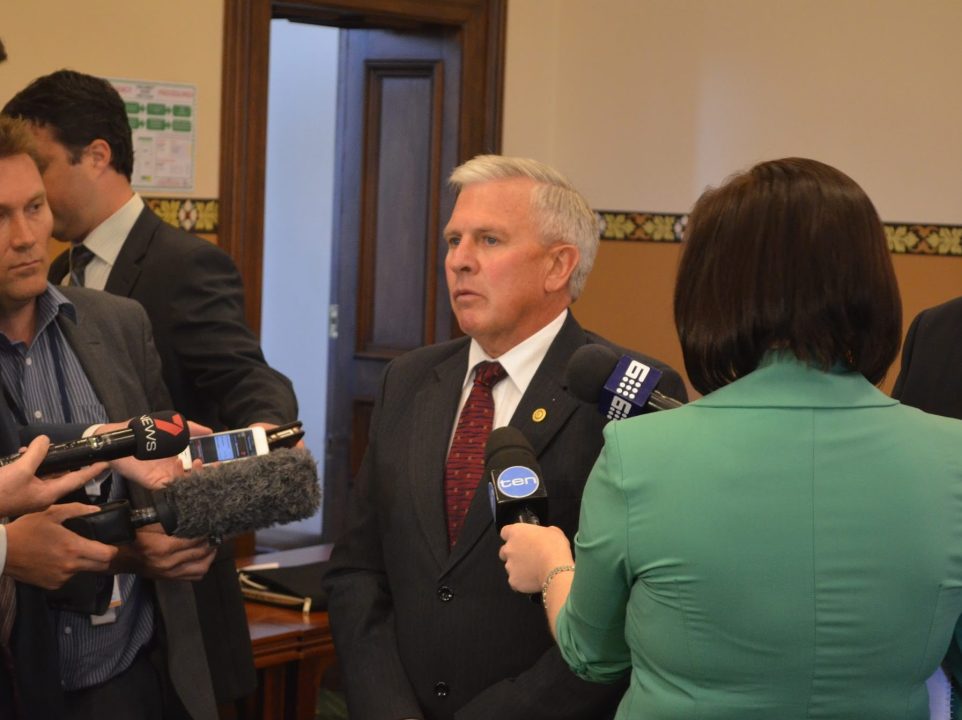 Robert Brokenshire addresses the media in 2013, with his former staffer Rikki Lambert (left, face obscured) recording the exchange for posterity.

He said he had also been in contact with Lucy Gichuhi, who ran behind Day on the party’s senate ticket this year.

“I understand she’s seeking not to nominate, but we haven’t got anything formal from her at this stage,” Hood said.

“What I would say is we’ve been blessed with two very good options, both the experience of Rob Brokenshire and the energy and vigour of Rikki Lambert, with experience of federal parliament…

“Whatever decision the party comes to will have my full support and be the right decision for the party.”

Lambert today floated a push for a more mainstream approach to policy if elected, telling ABC 891: “I don’t want to get into a big debate about what I would do as a Senator because it’s a party matter but my intention is to review some of the policies that we have been running with and adjusting them… to an end that actually gets us elected.”

“The result from the election was clear – the Senator (Day’s) vote declined, we have been looking at what the reasons were for that and we need to adjust our policy – that’s sensible political operation,” he said.

Hood said that approach was “valid”.

“There needs to be a reassessment of some of our positions in the federal space… that’s the normal course of events for any political party following the resignation of the sole sitting member,” he said.

“I support Rikki’s comments in that regard.”

But Brokenshire signalled a very different approach, telling InDaily the “party’s not going to slip to the left” on its “core values” issues.

“I’m proud of the fact we’re a conservative party but we’re also broad-based, with policy and legislation that’s very mainstream such as on the economy, debt reduction, trade management, job creation and lots of other things.”

He said it was important to install a Family First senator quickly to ensure the party had a voice in the debate over a plebiscite on same-sex marriage.

“The one big effort would be in arguing for a plebiscite that I believe the federal Government has a mandate for,” he said.

Brokenshire said he offered “focus, energy and experience” and was “keen to grow the Family First party having been with them a number of years now”.

He quit the Liberal party after he lost his seat of Mawson in Labor’s 2006 landslide election win under Mike Rann.

“There are two key areas Family First needs to work on… one is to grow the party and offer alternative options for the constituents with a broad-based focus on [issues such as] the economy, jobs and health,” Brokenshire said.

“The other one is our core values… we obviously are not supportive of euthanasia or same sex marriage.”

Lambert told ABC 891: “I think Robert and I are gentlemen enough that if matters of policy come up we will have to determine whether we talk about this here [on radio] or in the confines of the party.”

If Brokenshire is successful, the party will then have to fill a second casual vacancy for his Upper House seat – which could, ironically, ensure that both he and Lambert end up with parliamentary berths in any event.

Meanwhile, the building union says hundreds of contractors owed money after the collapse of Day’s company are likely to get nothing once it is wound up.

The Masters Builders Association also fears for contractors and says more companies will collapse, because of the connected nature of the industry.

The Home Australia Group has been placed in liquidation after a bid to sell a 75 per cent stake to overseas interests fell through.

The Construction, Forestry, Mining and Energy Union says the collapse has left hundreds of contractors out of pocket and once they become creditors, “that generally means they get nothing”.

“It’s pretty devastating. He was one of the biggest home builders in the state,” CFMEU state secretary Aaron Cartledge said.

“For many of those contractors, we’re talking about mum and dad businesses with maybe an apprentice… for them to be owed $20,000, it’s a lot of money and it’s devastating for their families.”

The union said questions needed to be asked about Home Australia’s extensive use of contractors which prevented them getting access to protected entitlements, including redundancy payments and superannuation.

At the same time many of those contractors worked exclusively for Day’s companies and were “quasi-employees”, Cartledge said.

He said Senator Day should also be asked to explain why he ran in the recent federal election at a time when problems with his company were brewing.

Masters Builders SA chief executive Ian Markos also believed Home Australia’s contractors would “end up with virtually nothing” which would likely result in a number of small companies failing.

“It shows how connected the building industry is, but also how challenging it can be,” Markos said.

But he warned against using the collapse to change the laws related to security of payments as a knee-jerk reaction.

“The best outcomes must be thought out carefully and not raised off the cuff,” he said.

“The people who had been left high and dry by his building company were forced to watch as Senator Day bankrolled his own political career,” she said.

“You can see why the public cynicism and contempt runs deep.”

It is likely liquidators McGrathNicol will examine the political payments as part of its investigation into the management of the group.

The Greens asked the Australian Electoral Commission in June to examine what Senator Rhiannon described as “irregularities” in donations and loans to Family First.

The AEC was asked to look at the the terms and conditions of the loans provided by Day.

The 2013/14 return records no debt owed to Senator Day or the company.

Senator Rhiannon said it would have been expected Family First would have made payments of at least $1.47 million to pay off the loan, but the disclosure only recorded $1.19 million in payments.

The AEC said in its response to Senator Rhiannon’s query it undertook a “regular program to examine disclosure returns” and information such as that provided by the Greens would be considered.

“Should any matters arise from an examination of a party they would be raised directly with that party,” it said.

There are instructions on the AEC’s disclosure form requesting parties to classify payments as donations or receipts, but there is no legal requirement to do so.

Hood told InDaily that, despite reports suggesting otherwise, “no donations were made from any of Bob Day’s companies to Family First”.

“Although it’s been reported there have been donations, that’s false,” he insisted.