It’s easy enough to write a disturbing, emotionally charged story about the plight of Cambodia. The need is still there; the horrors and the deprivation still exist. But it’s no longer the story that needs to be written.

Until now the story has been about orphanages, sponsoring individual children as they struggle to improve their lives. That’s also been the story of Sunrise Cambodia, founded by much-acclaimed Adelaide woman Geraldine Cox.

The need still exists. Go out to the Takhmao tip at Praek Ho, on the outskirts of Phnom Penh, Cambodia’s capital, and you’ll find children like 11-year-old Sok Phear. She has no shoes, only thongs, and no gloves, just her bare hands, as she rakes a metal hook through plastic bags piled high in one of the worst places on earth for a child, for anyone.

This is a dreadful place for anyone, but it’s her home. The smell is excruciatingly awful; this is a swampy mess of plastic and rot, a metres-high cocktail of all the detritus of a poor city. Sok Phear’s job is to collect 20kg of recyclable plastic bottles a day that will earn her USD$1, which is what her family will live on. She is one of hundreds, if not thousands, of Cambodian children who live like this. 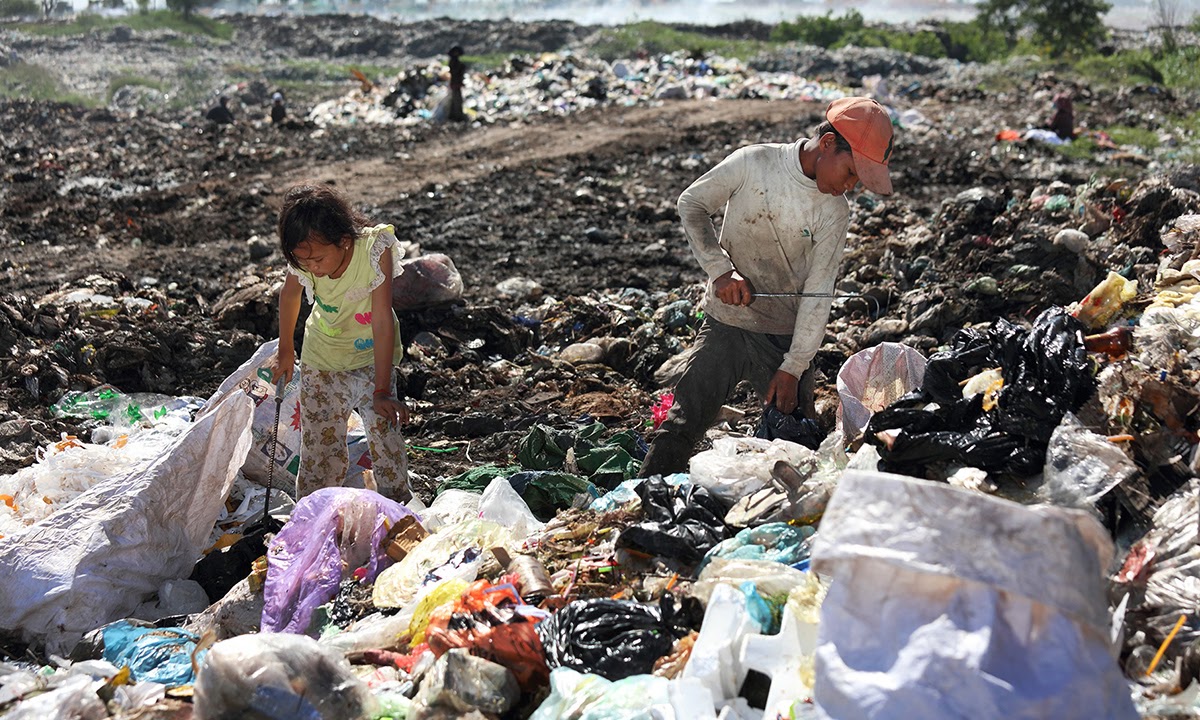 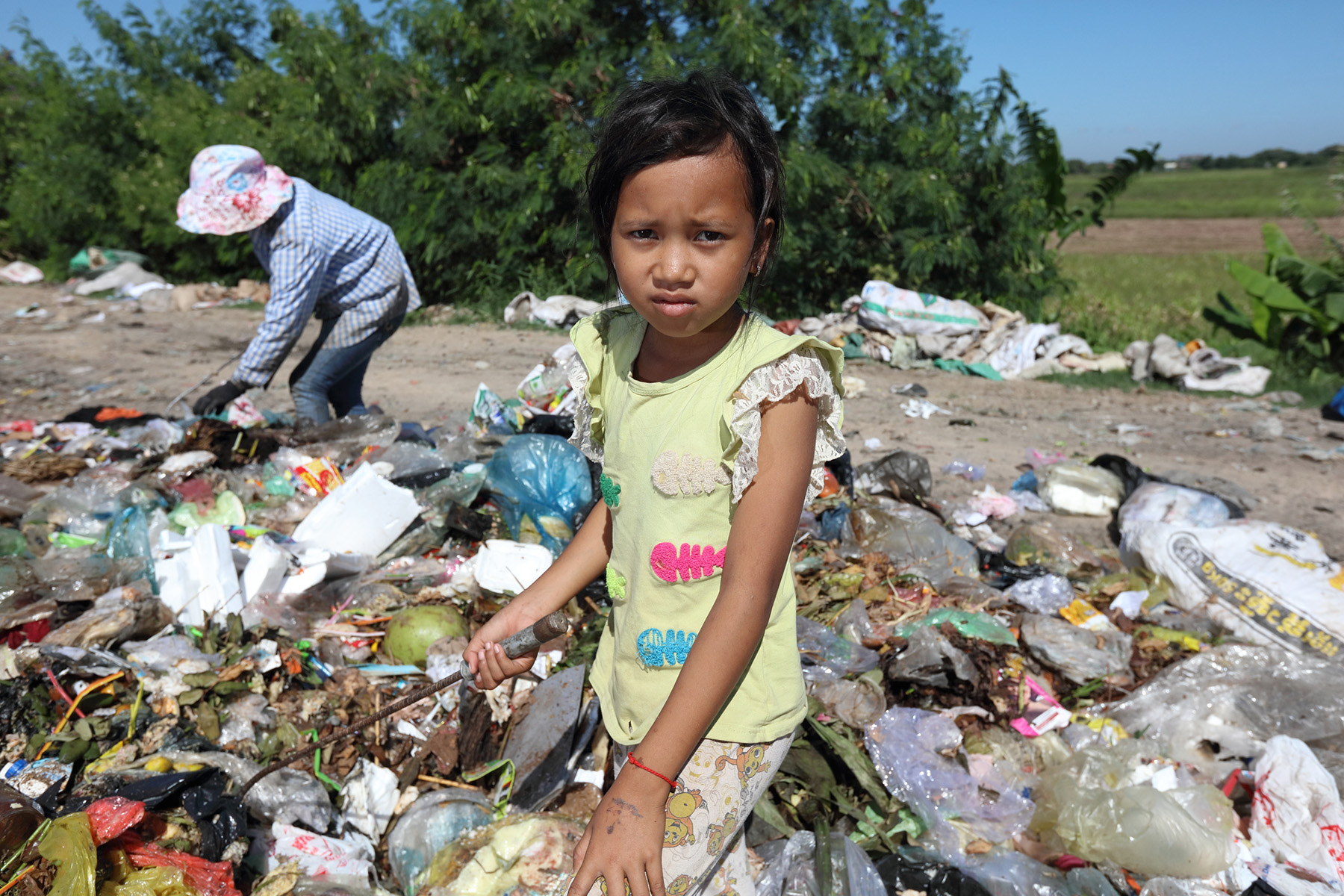 Above: Sok Phear, 11 years old, scavenges through garbage at the rubbish tip in Takhmao looking for plastic to sell for 5c/ kilo. Photos: Tony Lewis

For the past 22 years Sunrise Cambodia has taken in children like Sok Phear, given them a home, an education and a future – and a “big mum” in Geraldine Cox.

But now, responding to directions from the UN, the Cambodian Government and the Australian Government, Sunrise is undertaking its biggest challenge yet as it leads the way in promoting and encouraging community development programs in Cambodia, rather than simply focusing on child welfare.

“This has been a very successful first chapter in creating a legacy for the tenacity, vision, passion and courage of Geraldine,” says former Prince Alfred College headmaster Kevin Tutt, who’s taken on the role of ACF chairman and now oversees both day-to-day operations and the evolving vision for Sunrise Cambodia.

That evolution has included a ground-breaking merger this year with the Siem Reap-based NGO New Hope Cambodia, a move that has brought together two of Cambodia’s most prominent humanitarians, Geraldine Cox and 35-year-old Soth Kemsour, who founded New Hope 10 years ago.

“We have merged our shared functions in education, health and community development which is now our priority business, “ Tutt says, adding that the merged entity has been named Sunrise New Hope. “We have devised a new vision, purpose and values for Sunrise. Up until now, we have worked solely, but our commitment from here on is to work in partnership with both Cambodian, Australian and global partners.”

Soth Kemsour is enthusiastic about the merger: “Sunrise Cambodia and New Hope have shared the same vision of improving the lives of the local people for many years, It’s a perfect match,” he adds. 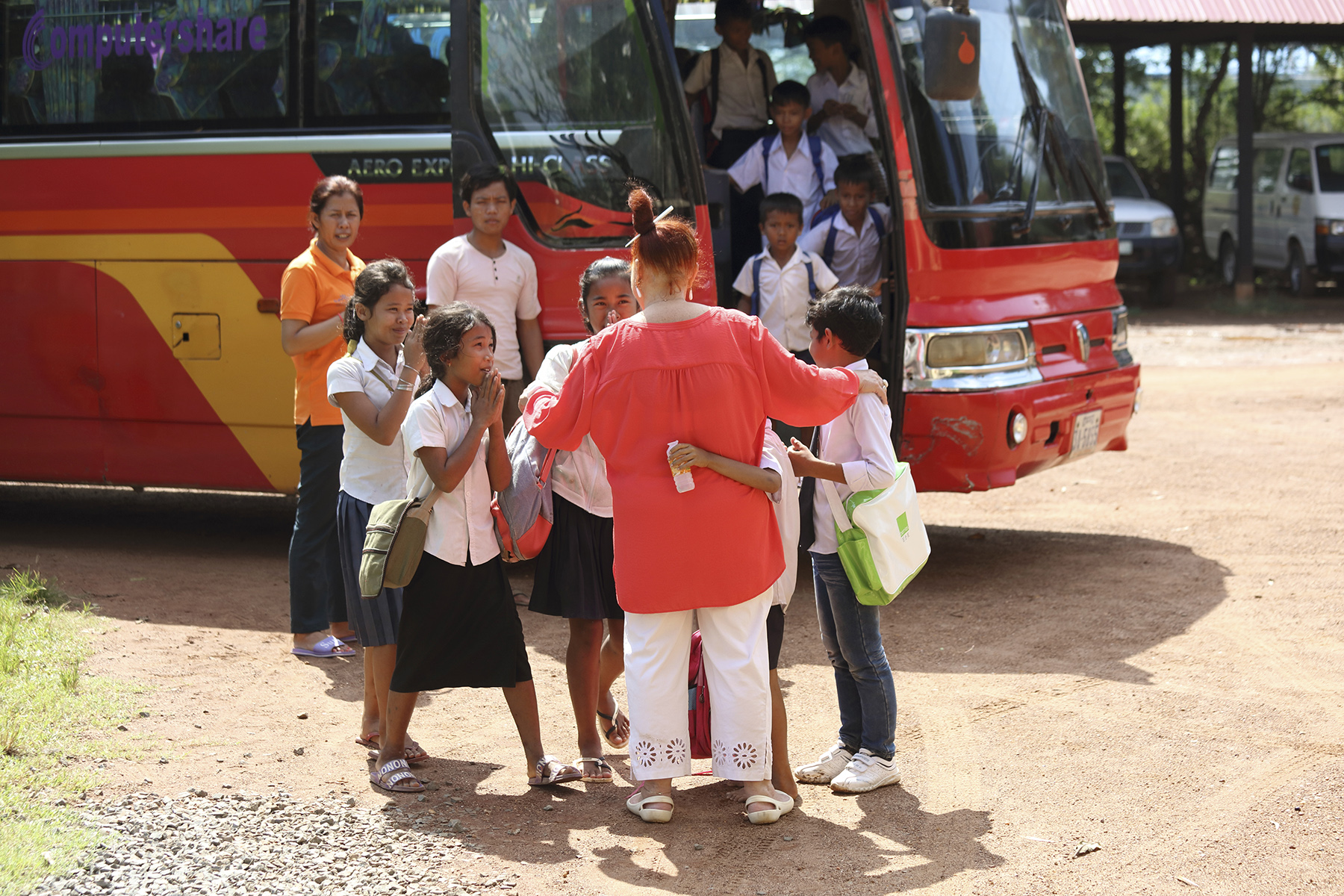 Geraldine Cox greets orphan children at Sunrise Kandal Province as they arrive home after from attending school for the morning. Photo: Tony Lewis

Geraldine Cox’s story is now well known in Australia, reinforced by an ABC Australian Story production late last year. Twenty years ago, at the age of 50 and after a long career in foreign affairs, she moved to Cambodia where she established Sunrise Cambodia. It began as an orphanage for 24 kids, something she inherited from one of the royal princesses struggling to help a country decimated by revolution and corruption. Since then several thousand children have called Geraldine “mum”.

“Geraldine has rescued a large number of impoverished, abandoned, trafficked, abused, disabled children, whose lives without her would have been short,” Tutt says. “And over the last 23 years she has provided exceptional care for those kids and taken them from incredible disadvantage to great advantage.” 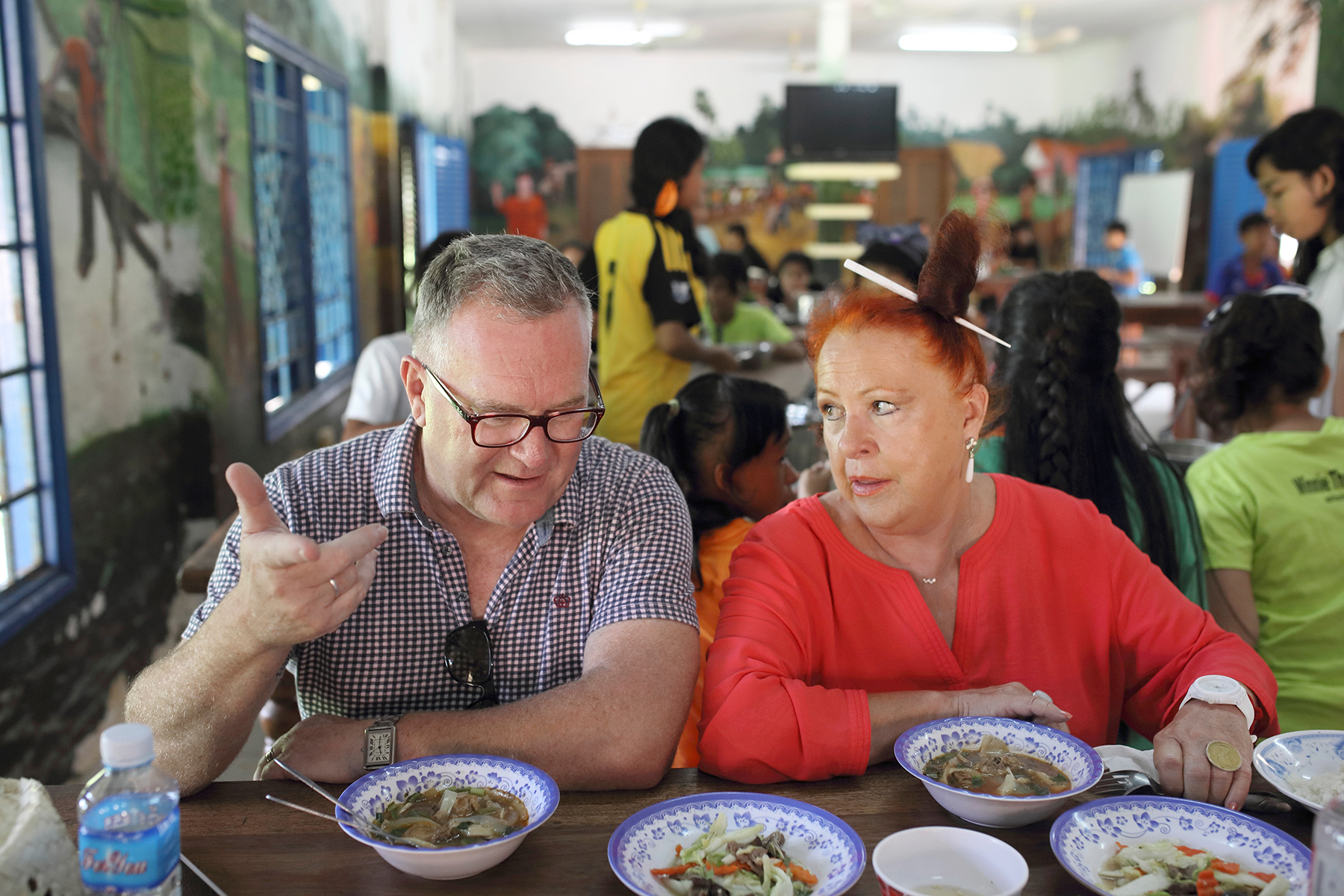 Cambodia is different to most of the countries competing for the well-meaning donor dollar. The period between 1975–79 was one of dreadful genocide as the Khmer Rouge made a ghastly attempt to create some sort of rural utopia, emptying the cities and killing off anyone who vaguely appeared educated. Estimates vary, but at least a quarter of its population, roughly two million people, were simply wiped out.

More than a generation of children have grown up without teachers, doctors, parents or role models. Teachers now may not be more than a page ahead of their students – there is still no university standard teacher training college in Cambodia. And forget about rural health facilities.

“It’s still a traumatised nation,” Tutt says. “It’s also seriously poor: 85% of the country still lives on or below the poverty line. There are 15 million people here and that is a lot of people living basically day-by-day.

“Geraldine talks about trauma being in their DNA and I think that’s right. But we are now at a threshold time. After 23 years, Cambodia has changed, Australia has changed, the world has changed and Cambodia needs a different model of development.

“It’s time to give families a new opportunity, so our focus now is on four pillars: education, health, community development and residential care. And we deliberately put residential care last because that’s shifted from being our first priority to being not our least priority, but our last resort.” 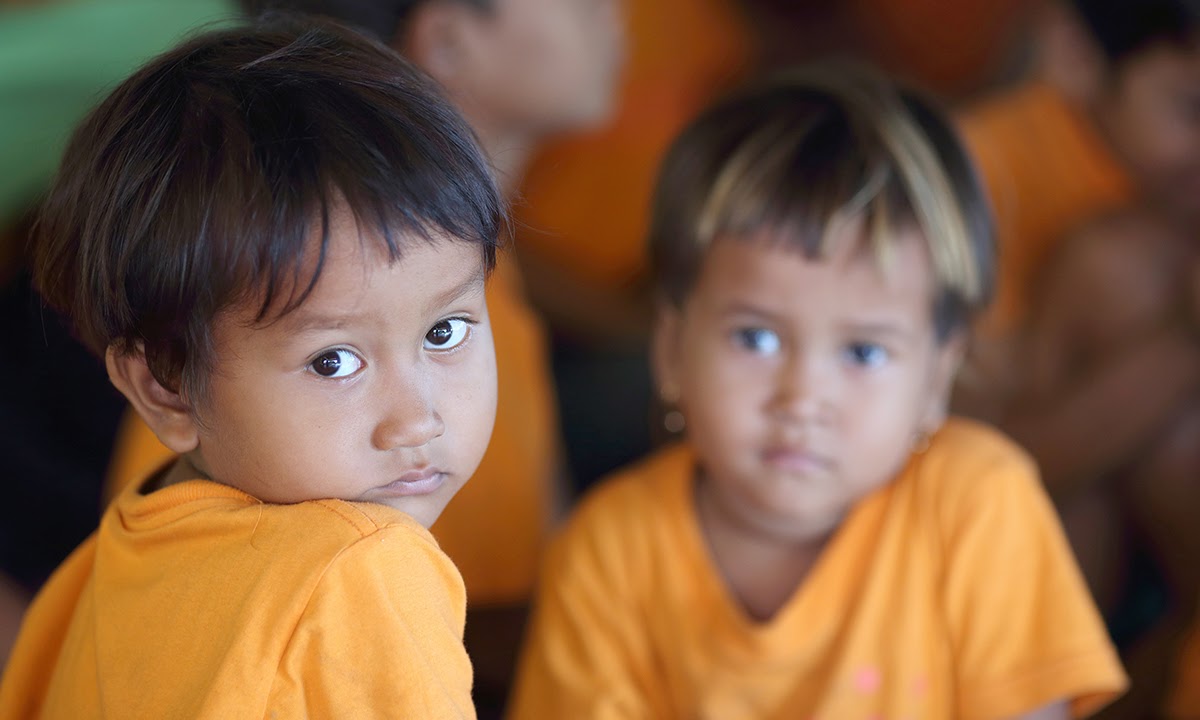 One of the factors driving the change is that the Australian government is tightening up on fundraising, particularly for overseas charities, and the compliance requirements in Australia are now rigorous if they are to retain their tax deductibility status. Another is the determination of the Cambodian Government to reunite, where possible, most children now in orphanages with their families.

“The emotional pull of an abandoned child or a child with HIV or with a disability can detract you from the more important cause,” Tutt says. “ There is nothing more powerful than a vulnerable child. But UNICEF is now driving a major worldwide approach to family reunification and family care and support as opposed to orphanage care.”

Last December saw the opening of Sunrise Kampong Speu, in Cambodia’s poorest province, where Sunrise has partnered with the Cambodian Government to upgrade a primary school for more than 200 students and add an enormously successful soccer program. The $130,000 project was totally funded by an Adelaide donor family.

From here Sunrise Cambodia will run English and computer classes, provide public health services, and provide school teachers with professional training. Sunrise provincial operations manager Hem Tola believes this new community centre will have an impact on around 3000 local villagers and their children.

“This is really exciting stuff,” Tutt says, “ and results have been outstanding with a huge increase in attendance and national soccer stars coming from this community.” 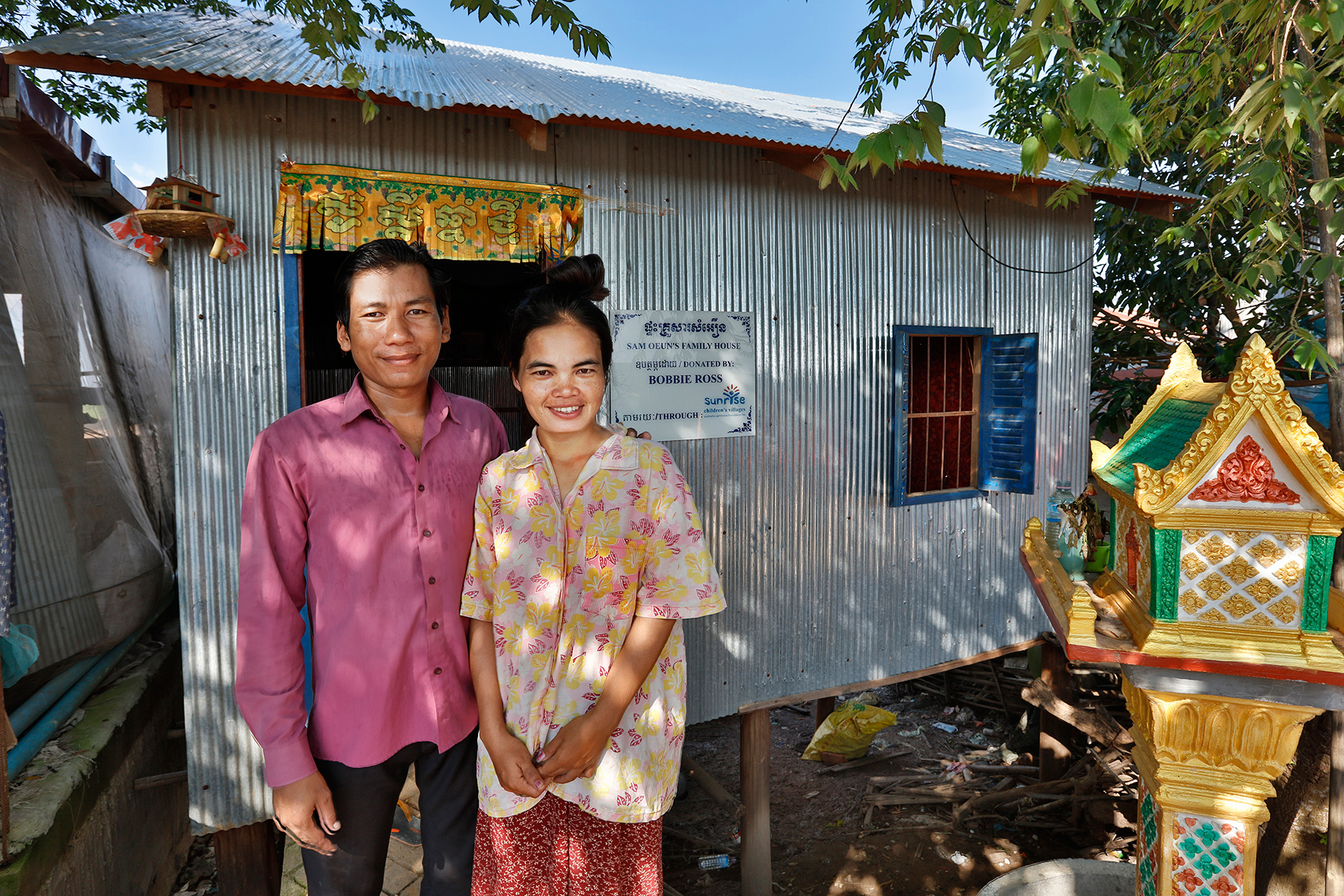 Sam Ouen and his wife outside their house in Kom Nor Thmor village – a new house like this costs $2000. Photo: Tony Lewis

Back near Phnom Penh, a couple of kilometres from the original Sunrise Kandal, in the desperately poor, one-street village Kom Nor Thmor, 135 migrant families squat in makeshift huts on a levee bank between a landfill excavation and a snake-filled swamp. Kids from the village now attend Sunrise classes in English and computing and are enrolled in kindergarten.

Here we see how very little money can go a very long way to improving peoples’ lives: so far there are nine new houses built in partnership with Global Village Housing, another NGO and also established by an Australian, Jason Thatcher. Partnerships such as this, Tutt says, will be essential as Sunrise expands its reach into more provinces.

Not far away, Irohar primary school has had four collapsing and unusable classrooms restored by Adelaide-based MGA Insurance, with a playground donated by Birdwood Primary School, one of whose teachers has also visited to help with teacher training: “Birdwood Primary has been a very good partner,” Tutt says. 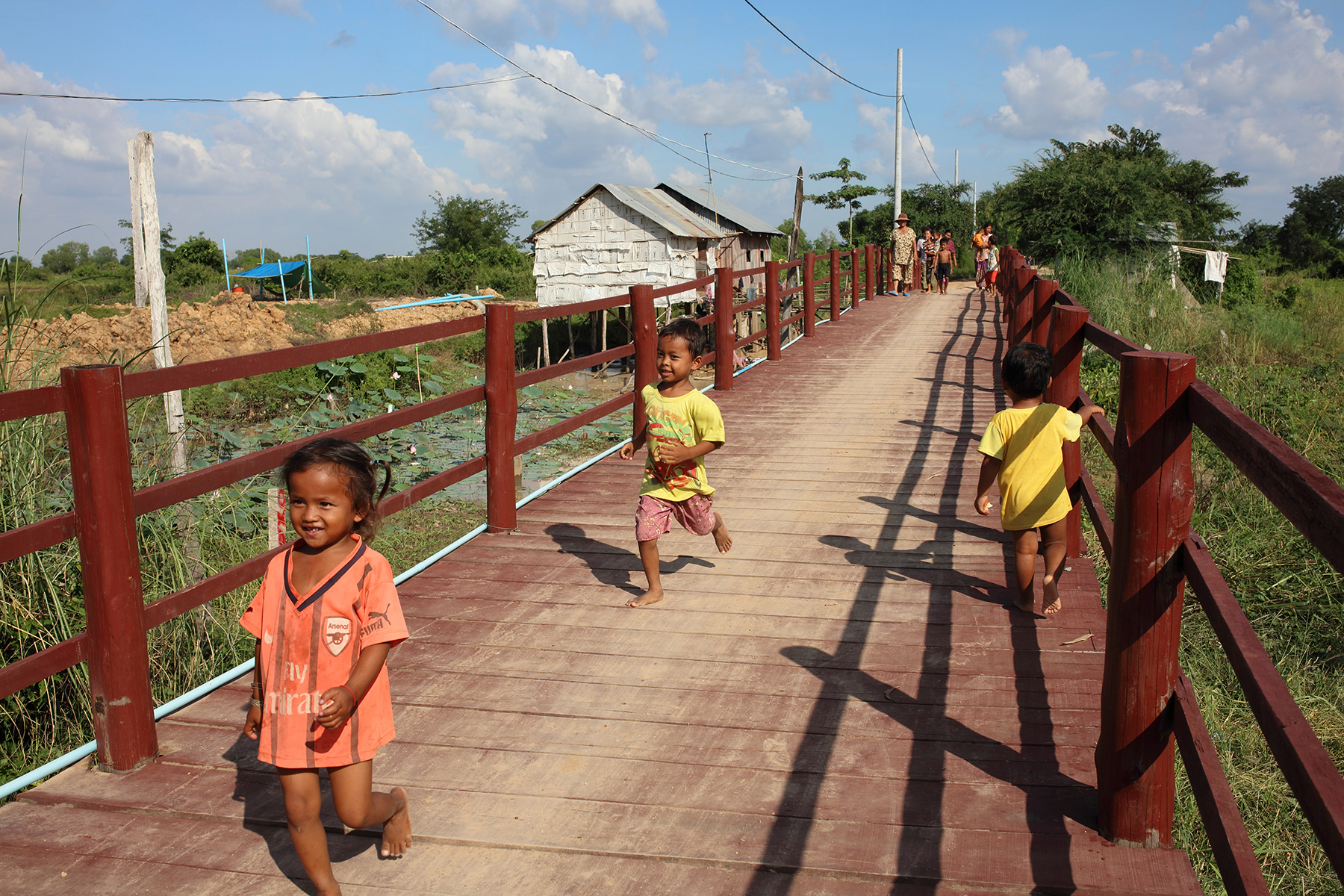 Children run across the bridge at Kom Nor Thmor village. The bridge was provided by Sunrise at a cost of $30,000; before it was built, during the rainy season children could not get to school. Photo: Tony Lewis

Sunrise has equally ambitious plans to grow its in-country fundraising through establishing a restaurant – the “Mday Thom” (meaning Big Mum) restaurant was opened at Sunrise Siem Reap in April, along with a travel service and social enterprise programs to provide Sunrise kids and others with vocational training.

“We have learnt much from New Hope in social enterprise programs and in initiating new developments in restaurants, tour programs, and mentoring,” Tutt says.“We are shifting to community-based needs assessment rather than Western perceptions of need.

“So that’s why out at Kom Nor Thmor we work with that village chief, the team leader, to tell us what they want rather than us coming in and saying they need this. It’s about meeting the needs of the community rather than imposing our understandings of it. Cambodian kids don’t need tennis courts. Families need houses and sanitation and things like water.

“One thing that I’ve learnt since I’ve been in Cambodia is that cultural differences matter and you must understand them. We’ve got to seriously understand Cambodian culture and Cambodian people and work within their context not ours.” 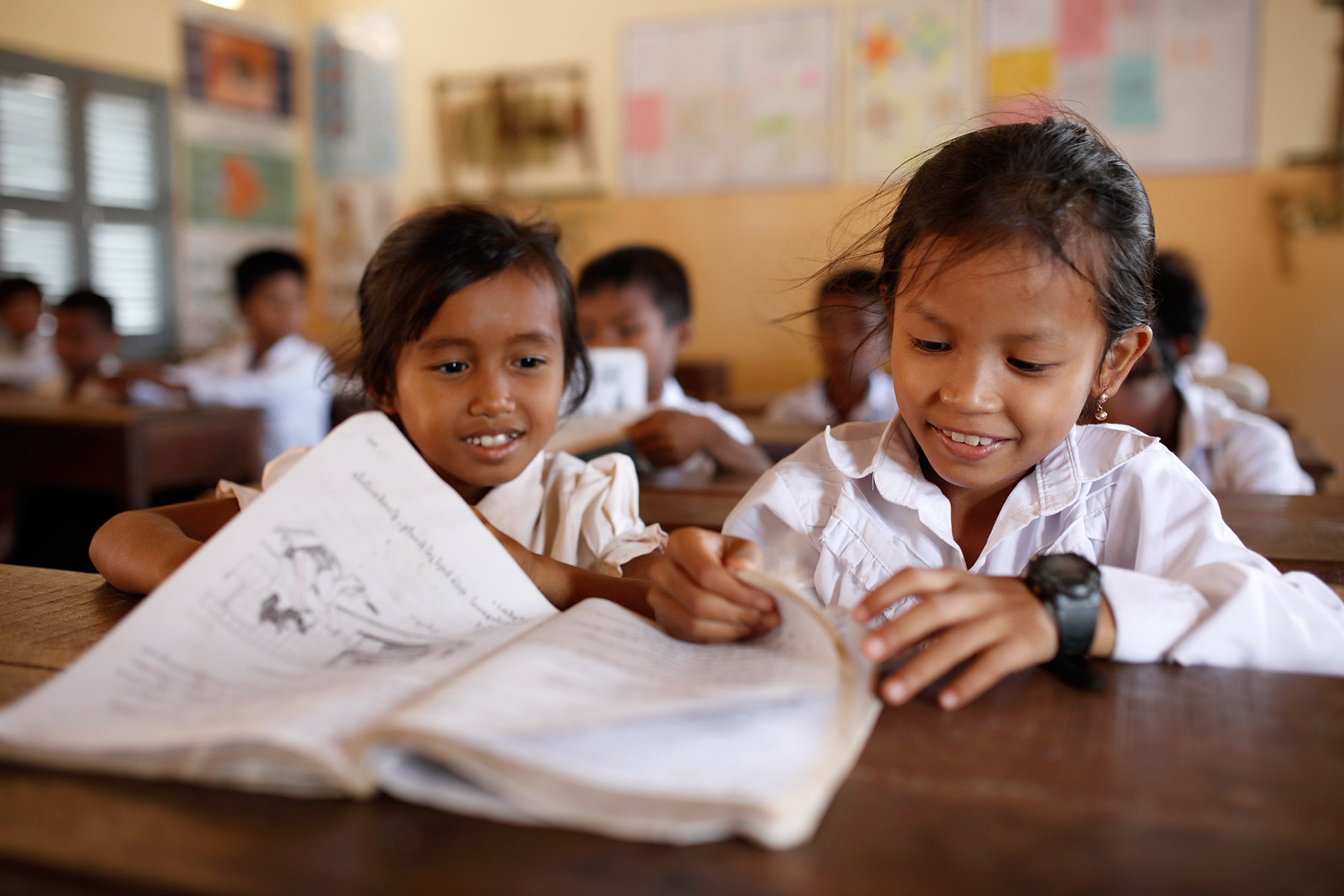 In the classrooms at Sunrise’s school at Kampong Speu. Photo: Tony Lewis

Tutt concedes this may have implications for their extensive child sponsor donor base: “There is great pull out of Australia for that notion of direct child sponsorship and so as we shift our sponsorship program we will have to make sure that that is well understood. We are communicating with them is that you will now continue to sponsor a child, but that child might be living back with its family, not in an institution.

“I would like to see Sunrise presence in every one of the 24 provinces in Cambodia large or small,” Tutt says. “There is a need for our services across the whole country and I would like to look at opportunities in nearby third world environments such as Laos and Myanmar.

“I am inspired by Fred Hollows’ model. They are now an international operation and having great impact around the world. Our product is different but our own impact can be scaled up significantly. I look at the model of Fred Hollows with respect to succession planning as well. I want Geraldine’s legacy to be sustained. The name Geraldine Cox or the woman with the red hair and the chopstick needs to be alive and kicking metaphorically for a long time yet.”

Go to the Sunrise website www.sunrisecambodia.org.au to learn more.