However, “following an extensive number of faults in a short period, 315 MW of wind generation disconnected”.

“The uncontrolled reduction in generation resulted in increased flow on the main Victorian interconnector (Heywood) to make up the deficit,” the report says.

“This automatic-protection operated in less than a half a second at 16:18.

“The event resulted in the SA regional electricity market being suspended.”

The report found that in the lead-up to the blackout, generation reduction occurred at six wind farms.

“There was no reduction in thermal generation,” it said.

However, additional analysis was needed to determine the reasons for the reduction in generation and voltage levels.

The report does find that both back-up providers contracted by AEMO to restart the network after “going black” experienced problems – both due to issues which are unrelated to the debate on renewables.

Researcher Dylan McConnell, from the Melbourne Energy Institute at the University of Melbourne, said the report did not provide clarity about whether the state’s renewable energy mix contributed to the blackout.

“It could have also happened to a gas turbine (the loss of generation), but we don’t know at this stage,” he told InDaily.

“The report is sufficiently ambiguous at this point to not necessarily provide a great deal of light on some critical issues.”

As a result, the report will do little to stem debate over the contribution of South Australia’s renewable energy generation to the event, with lobby groups and politicians rushing to put their own spin on the report’s findings.

Premier Jay Weatherill said this morning that “the blackout was triggered by a weather event”.

“Malcolm Turnbull, our PM, took the first opportunity to lecture South Australians about the dangers of renewable energy, and for the Labor states in promoting unrealistic renewable energy targets,” he said.

“The PM was fearful that he would be blamed for a national electricity market that caused a blackout.

“The PM was fearful that he would be blamed by the right-wing of his party for pushing into renewable energy when he knows that he leads a party which is dominated by coal interests.

“It’s deeply disappointing that we do not have the national leadership which is necessary to deal with this and other issues.”

He said the reality was that wind farms were unable to operate because of the three “shocks” to the system caused by the downing of transmission lines.

However, the state Opposition argues that the AEMO report contradicts the State Government’s claim that the system was operating as it should when it shut down.

“Premier Weatherill is denying any responsibility for the blackout,” he said.

“The Government said at the time that the electricity system worked exactly as it should: the AEMO report today said that it’s actually not possible to say that.”

He repeated the Opposition’s calls for an independent inquiry into the blackout, and clearly pegged the blame for the event on SA’s renewable energy generation.

“Until we can store renewable energy it is intermittent,” he said. “For us to have 41 per cent of our state exposed to intermittent energy at the moment is completely unacceptable.

“The preliminary report by AEMO suggests we need to think differently about how we run a decarbonising electricity system, reflecting the significant differences between using conventional thermal generation compared to a mix with higher levels of intermittent renewables,” Warren said.

“Of key importance is how the mix of generation in a high renewables grid responds to events like the sudden loss of transmission in the mid-north of the state and the supply that it was carrying that triggered events last Wednesday afternoon.”

The AEMO report found that immediately before the storm brought down the transmission lines, SA wind farms were generating 880 MW of power, with SA gas-powered stations generating 300 MW, and 610 MW coming to the state via two interconnections with Victoria.

AEMO says that while the event was triggered by extreme weather, it would conduct a “thorough investigation” into how each component of the energy system responded.

The report includes a table explaining the events – which occurred in seconds – showing a cascading stream of disruptions.

Three lines recorded faults before four wind farms in the mid north of the state reduced their output by 123 MW. A few seconds later another fault was recorded on the Davenport to Mt Lock line, before another two wind farms recorded reductions in output.

Almost immediately, the flow across the Heywood interconnector increased dramatically, resulting in a separation of the SA and Victorian networks.

Finally, the Torrens Island and Ladbroke Grove power stations tripped, along with all remaining wind farms and the Murraylink interconnector, resulting in supply being lost to the entire state. (Ladbroke Grove is a peaking gas-powered station in the South East.)

Below are two key charts from the report, showing the generation mix just before the storm brought down the transmission lines, and the sequence of events that led to the blackout. 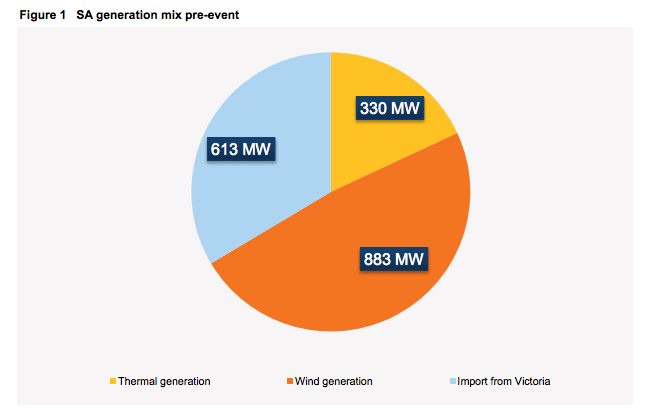 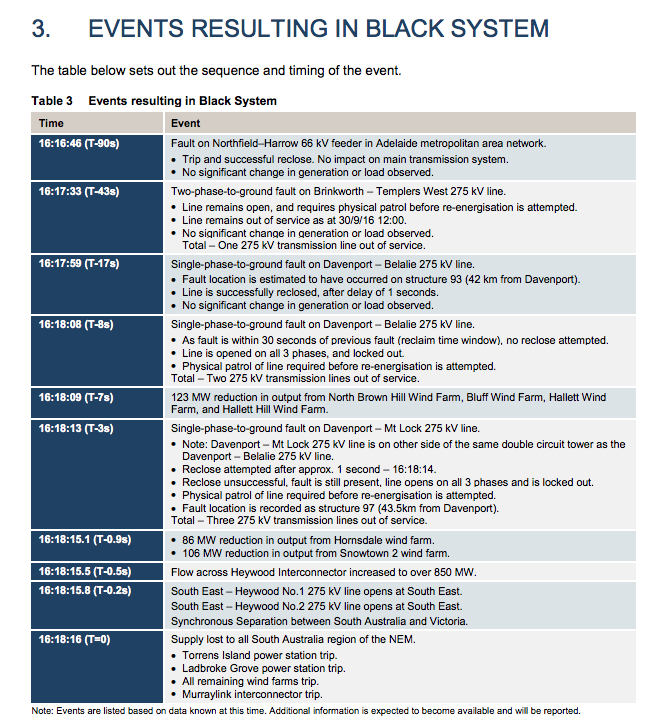 The AEMO report raises questions about the response to restore power. 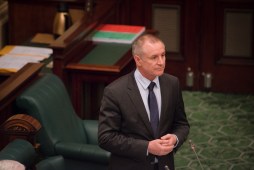 These services are meant to restart the electricity system when it goes down, but there were problems with both of the providers after the blackout.

One, the report said, was not able to provide “black start capability” due to storm damage to its auxiliary diesel units – and that service is still out of action. However, it says the “transmission configuration” at the time meant this service would have had no impact.

As a result, Torrens Island had to be restarted via the Victorian interconnector.

McConnell said these issues appeared to be disconnected from renewable energy.