While most of the Adelaide metropolitan area has had power restored overnight, those in the northern parts of the state and the Eyre Peninsula are likely remain without services.

SA Power Networks tweeted this morning urging people to ensure they have a battery operated radio and to keep mobile devices charged, using car phone chargers and laptops as a potential source of power.

Premier Jay Weatherill said predictions of further wild weather – including wind gusts of up to 140kmh, especially along the west coast of Eyre Peninsula, and up to 100 millimetres of rain across the Adelaide Hills – would bring further challenges.

A long night for many people & communities. Tomorrow's forecast is set to bring new challenges. Thank you everyone for patience & hard work.

The latest update follows the loss of power to the entire state late yesterday, with no upstream supply from the transmission network.  SA Power Networks’ outages map shows blackouts that occurred across the state, except for Kangaroo Island. 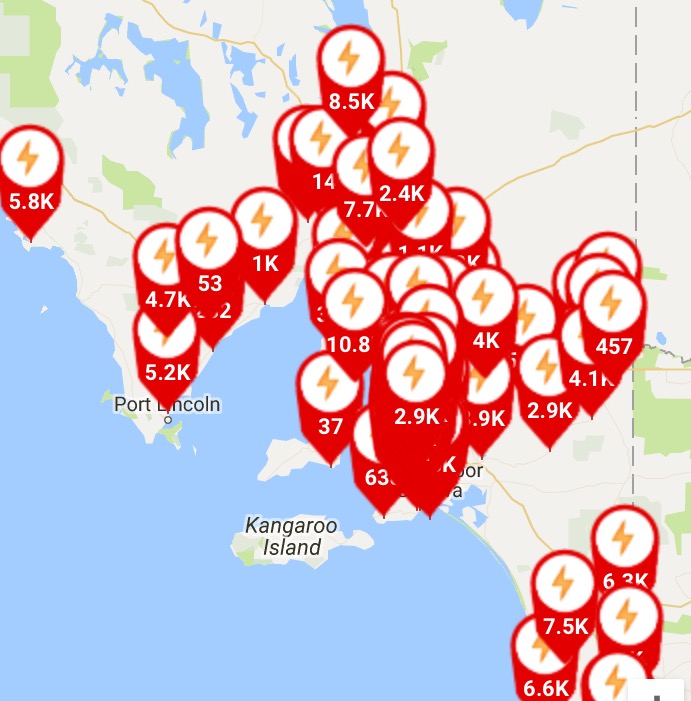 Senator Nick Xenophon has called for an inquiry into the state’s power supply, telling ABC radio the Australian Energy Market Commission should carry out robust independent analysis to learn lessons from the incident and ascertain whether SA’s energy mix made it more vulnerable to an outage.

However, the Premier has maintained the lengthy outage was caused by bad weather and renewable energy was not to blame.

SA Police are asking people to avoid travel this evening.

“Late this afternoon, about 3.50pm, power was disrupted,” SAPOL posted to Facebook.

“The cause of the problem is being investigated.

“Many businesses and services across SA have been disrupted as a result.

“The community are being asked to remain calm, to avoid leaving their homes if they can and to be patient if on the roads.

“Power is expected to be progressively restored.

“Police are aware that boom gates are down, some train and all tram services are disrupted – however alternate transport arrangements are being made.

“Emergency Triple Zero (000) networks are working – but please refrain from calling unless it is a life threatening situation.

“Please check on vulnerable neighbours and people in your community to ensure they are safe and fully aware of the issue.

“Police would also recommend that you conserve your phone battery if possible and tune in to the state emergency broadcaster, ABC, on a battery powered radio where possible for updates.”

A storm reached Adelaide by midday on Wednesday and was expected to dump up to 100mm of rain in some areas, including the Adelaide Hills, where a flood warning was in place.

The Bureau of Meteorology expected the worst of the winds to hit the state’s mid-north.

The cyclonic conditions were also expected to whip up large swells along the states coastal waters, producing 10-metre waves.

A warning issued at 12.26pm said there could be destructive winds of up to 140km/h in parts of regional South Australia over the next few hours.

So far the State Emergency Service has responded to more than 50 calls for help but believes that will rise dramatically.

Senior meteorologist John Nairn said records suggested South Australia had not experienced a storm so severe for more than half a century.

“This depth of the low, this close to the coast, is very damaging,” he said.

Up to 100mm of rain is forecast for the Adelaide Hills, with winds expected to pick up this evening. The Bureau of Meteorology has issued a flood watch for the Mid North, Mt Lofty Ranges and metropolitan Adelaide.

Winds should average about 90km/h, whipping up ocean waves to more than 10 metres, but gusts are forecast to be much stronger.

The State Emergency Service says 43,000 sandbags have been distributed and more were to be handed out on Wednesday.

While SA Power Networks says power outages are inevitable and some could be long.

The Government has closed a large number of national parks and reserves for the next two days for public safety reasons. See the full list here.

Thunderstorm thru Woomera less than an hour ago tracking across Eyre Peninsula toward #Adelaide.For all SA Warnings https://t.co/IXBXq1M8lR pic.twitter.com/v0dwCw6Wma

The Bureau of Meteorology has issued a severe weather warning for the state’s west coast and large parts of the Eyre Peninsula and that warning was expected to move east during the day.