In a major rebuff to the Adelaide City Council – which has moved to regulate the nascent mobile food van industry with restrictions on the number of licences and the number of CBD operators on any given day – the State Government has introduced a bill that it says will cut council “red tape” by over-ruling the regulations of individual local government authorities.

But the move has attracted a stinging response from prominent councilors, with one calling it “political opportunism” to the detriment of city businesses.

“Essentially, we don’t see it’s the councils’ role to determine how many businesses – or what sort – should be setting up in a particular area,” the bill’s author, Labor MP and minister assisting the treasurer Chris Picton, told InDaily.

“This is no different.

“We don’t see that councils should be determining what type of food people sell from food trucks, or the particular times they operate… these are decisions for the market to decide.”

He said the bill, if passed, would mean councils across SA “must issue those [food truck] permits, and can’t set a cap on the number of those permits that can be offered”.

The regulations will also cap annual permit fees, with the requirement to provide daily, monthly and pro rata rates “to encourage flexibility”.

While the mobile food van micro-industry has been a feature of the CBD, Picton said that in “other states and other countries, such businesses operate across suburbs [and] there’s no reason why that shouldn’t happen here”.

“And that will reduce the pressure on it in the city,” he said.

In introducing the bill, Picton told parliament today that “we need to ensure that our laws keep pace with changing approaches to running a food business”.

“Unfortunately the permits and conditions imposed by councils under the Local Government Act have become overly complex and inconsistent… some councils are only providing permits for certain types of businesses, such as ice cream vending, or only issuing permits limited to a few defined foreshore zones, with some not allowing food truck businesses at all,” he said.

“Further, other councils were reducing the number of permits altogether.”

The rise of the industry in the CBD prompted an outcry from local “bricks and mortar” businesses, which spurred the council into regulating in a bid to achieve a compromise.

Central Ward councillor Houssam Abiad – who spearheaded the changes during his tenure as Deputy Lord Mayor – told InDaily today Premier Jay Weatherill “saw in this is a political opportunity and he took it, to the detriment of city businesses”.

He said while the bill contained “a couple of positives”, there were also “a lot of negatives”.

“Allowing more of an umbrella approach [to licensing] across the state … does reduce red tape and allow licencees to trade in multiple locations, [but] it will create chaos in the city if the government grants [for example] 100 licences,” he said.

“We need to have some research that discusses the demand and supply… this is going to have more of an impact on mobile food vendors [than fixed city businesses].

“Now they have to compete with an unlimited number of mobile food vendors.”

Abiad is adamant the State Government “shouldn’t interfere at all on how those [licences] get operated in our city”, arguing the reforms could discourage new small businesses from opening in the CBD if they have to compete with an unlimited number of food trucks.

“This will hurt the small business sector in the economy… I make no apology at all for standing up for [city business] ratepayers,” he said, insisting that both mobile and fixed businesses had to coexist in the city.

Local Government Association president Dave Burgess told InDaily the LGA was “generally supportive of any changes which will reduce red tape for both councils and businesses”.

“However, we strongly believe councils should have the discretion to regulate specific elements of the food truck industry in order to balance the interests of their communities,” he said. 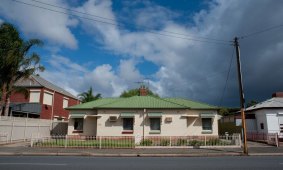 While councils will be able to regulate the locations in which mobile vendors operate, Picton is hopeful a permanent “city food truck park” will be established.

“If you create a central spot where you know they’ll be, that reduces some of the pressure as well between fixed businesses and food trucks,” he said.

He also wants to establish a food safety “passport” system to streamline inspection processes and sponsor a “tester truck” concept, whereby new operators can market their wares for a short period before committing to a bigger financial investment.

It’s unclear how Picton’s bill will progress through parliament, but he said “a number of Opposition MPs have been positive about what we’re doing in this regard”.

“We’re hoping they’ll see this as a sensible measure of reducing red tape and promoting new businesses and entrepreneurs,” he said.