The Adelaide city office building vacancy rate is now 15.8 per cent – the highest rate since 1999 – according to the Property Council of Australia’s latest Office Market Report, released this morning.

That’s 1.7 per cent higher than in January this year.

An increase in the supply of office space – with thousands of square metres of space due to enter the market in the next few years – has coincided with a sharp decline in demand from tenants.

Demand for Adelaide city office space is now at its lowest level in at least a decade. That demand, according to the report, has been declining since 2008, and has been in negative territory since 2013.

“The last two months have been the quietest two months I can remember,” said Office Services CBRE Adelaide Director Andrew Bahr, who has been in the industry for around 15 years. 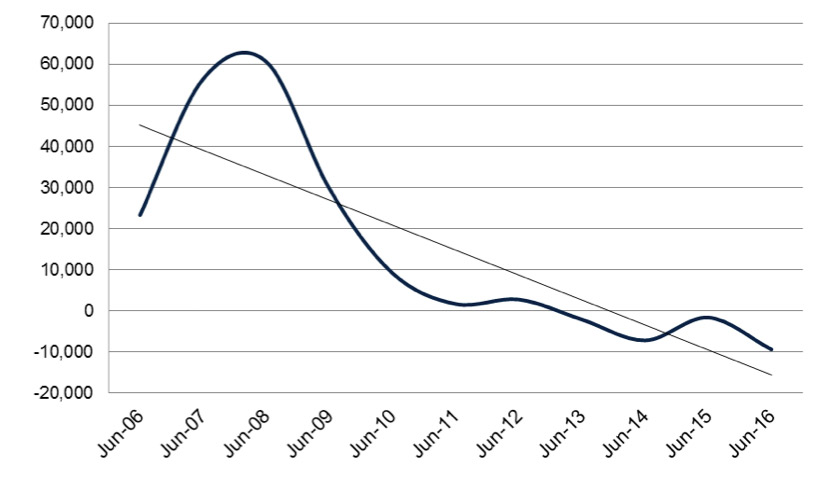 Demand for Adelaide CBD offices has been falling, on average, since 2008. Image: supplied

Demand in Adelaide is at historic lows. Image: supplied.

He said a “flight to quality” among office tenants was seeing low-grade office buildings left empty, but without the level of demand required to justify large-scale conversion of those buildings into residential accommodation.

“There’s a percentage of that C and D-grade stock that is … obsolete,” Bahr told InDaily.

“C and D-grade [buildings are] just sitting there.

“The thing we don’t have at the moment is a lot of growth amongst the tenants [and] tenants want the better quality stock.” 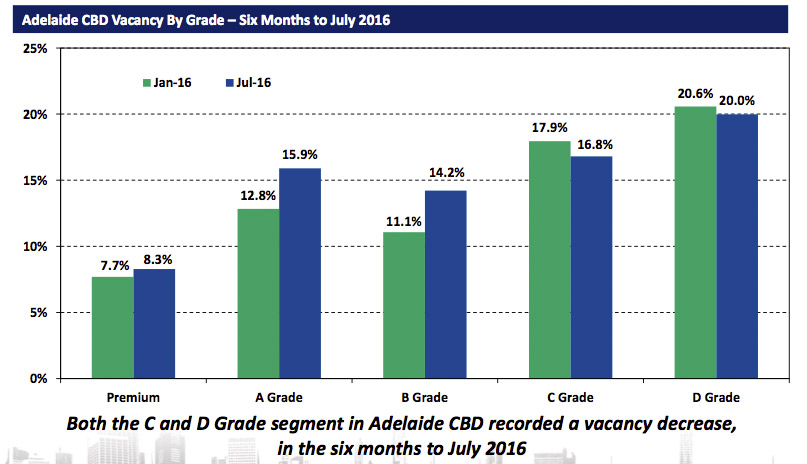 However, those low-grade buildings have slightly decreased in vacancy over the past six months, whereas higher-grade stock has emptied significantly over that period.

B-grade city office buildings have emptied the fastest, recording a vacancy rate of 14.2 per cent in July this year, up from 11.1 per cent in January. 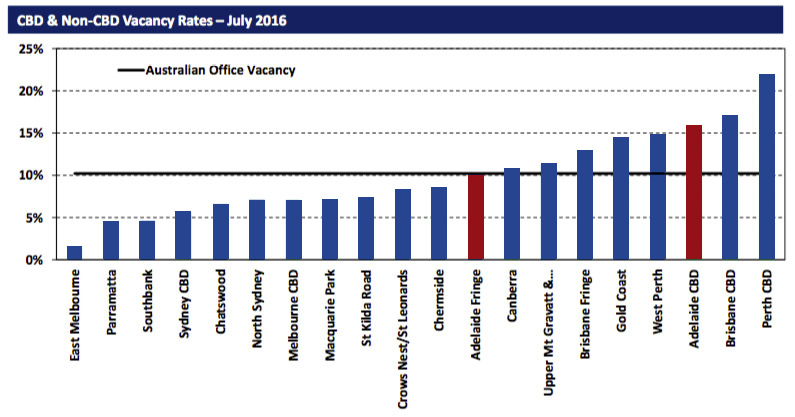 Vacancy rates in Adelaide’s CBD are among the highest in the nation: Image: supplied / Wayne Psaila

Bahr said about 40 per cent of the CBD’s office space was occupied by the public service and “no one particular sector” was overwhelmingly occupying the remainder of the space.

In March, the State Government announced it would shift about 500 public servants to a new building in Port Adelaide, although not all of those bureaucrats will be drawn from the CBD. However, InDaily revealed last week that the Premier’s department would soon be consolidating its resources into fewer locations in the city.

“If government agencies were to shift out of the CBD … naturally, that would be a challenge,” Property Council SA Executive Director Daniel Gannon told InDaily.

A rendering of the building the Government plans to build to accommodate 500 public servants. Image: supplied.

But Gannon said that there was no “problem with injecting new supply in the market” but “we currently need to be doing is focusing on the demand side”.

Gannon said the state needed to attract tenants from growth industries such as information technology, robotics and digitisation, plus the headquarters of large companies, in order to force a turnaround in the numbers.

“What we need to be doing as a state is … [attracting] the jobs of the future [in] the sort of sector that will exponentially grow,” he said.

“We don’t have many headquarter businesses based in Adelaide.”

He said the state needed to “start pitching to headquarter companies” by emphasising Adelaide’s relatively low house prices and its “liveability”.

“What we’d look to see moving forward is more jobs and a higher population.”

The State Government and Adelaide City Council aim to increase the population of the city to 50,000 by 2040.