Andrea Broadfoot, who is giving the Liberals a scare in the regional seat of Grey as counting of pre-poll votes continues, yesterday put a significant taxpayer subsidy on the table as the NXT signalled securing the future of Arrium was foremost on its list of demands in negotiations with Liberal and Labor parties, with a hung parliament a looming prospect.

“There are a range of measures that are required to ensure that the business is sustainable long-term [and] $50 million and $100 million does not cut it, so we are probably looking more in the order of $300 million,” Broadfoot told ABC891.

But Xenophon told InDaily today he had now received administrator KordaMentha’s own list of demands “on a confidential basis”.

“We’re working through that today,” he said ahead of a meeting with KordaMentha executives.

“The reason why Andrea had that [$300 million] figure there was that it was a figure that was spoken about in the Whyalla community as to what would be necessary to save the steelworks… we’re working through in a methodical way and will have further discussions with state and federal governments about… what’s the most cost-effective way to secure the future of the steelworks and jobs in Whyalla.”

Asked if that meant he was revising down the estimated subsidy demand – likely to involve $150 million in state and federal cash matched by a prospective buyer – Xenophon said: “I’m suggesting that would be the maximum figure.”

Stirling isn’t actually against subsidies, as such, he just wants to make sure there’s a good outcome

He also insisted his Xenophon Team, which has likely secured three Senate seats in the wash-up from Saturday’s election, was united on the issue of taxpayer-funded subsidies, despite his campaign strategist and running mate Stirling Griff previously signalling his opposition to similar bailouts.

In an interview with InDaily last October, Griff – now a senator-elect – admitted “I stray a little bit with Nick” on the issue, saying he would not have supported ongoing subsidies for Holden, which Xenophon had strongly advocated.

“I would not be supporting giving automotive companies further subsidies,” he said at the time.

“I do not find that the ideal way to go (but) I think Nick has a different view on that.”

He said rather than subsidising industry, he’d prefer a focus on procurement, “to make sure that governments at all levels are very strongly supporting industries like that by purchasing the goods”.

“I’m more inclined to look at it that way, rather than, ‘Here’s your dough, go off and do whatever you like with it’,” he said.

In a statement today in response to several attempts to contact him, Griff told InDaily: “I’m not anti-subsidies, providing they produce a positive end result… 6000 jobs and securing Whyalla’s future is just that.”

Xenophon echoed the sentiment, saying: “Stirling isn’t actually against subsidies, as such, he just wants to make sure there’s a good outcome.”

He said the proposed GMH bailout had “no conditionality if the company left the country to ensure we could access the plant and equipment”.

Xenophon said his team’s proposed solution was for Government to “provide assistance in a targeted way [whereby] if something goes wrong with taxpayers’ assistance we make sure there’s some way to claw back some of these funds”, along with access to intellectual property, plants and equipment.

He said he would also push strongly for stronger commitments to local procurement and further strengthening of anti-dumping policy to drive down oversupply of Chinese steel – “policy which isn’t reliant on a cash injection”. 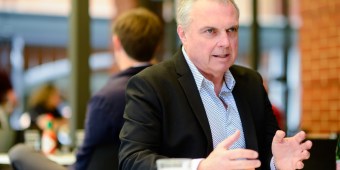 The power behind the Xenophon throne

“It’s better to do it properly first and get a fair deal in terms of restructuring and getting [Arrium] on track for a long-term future,” he said.

Xenophon said it was “too early to say” who he would throw his weight behind in the event of a hung parliament – an eventuality he last week wagered a bottle of Penfolds Grange against.

Asked whether he would be influenced more by policies, lower house numbers or the two-party national majority, he replied: “I was thinking more about our numbers – that’s the number I’m interested in!”

If his candidate falls short in Grey, he will likely lose a significant say in who forms Government, putting in stark light his decision to reject a preference deal with Labor.

But he insists: “This is not a business you can have regrets about.”