Marshall visited several regional hubs during the eight-week campaign, with his appearances documented on social media.

But Labor points out that booths in every region the Opposition Leader visited suffered a significant primary-vote backlash against the sitting Liberal MP.

Tanunda – Primary swing – 5.6 per cent against

A pleasure to meet with Rex Hall and visit the #CFS Memorial in Naracoorte. A museum is now planned. #RegionsMatter pic.twitter.com/xV4ddCv5Qp

Naracoorte – Primary swing – 4.1 per cent against

Mt Gambier – Primary swing – up to 4.7 per cent against

Kellidie Bay – Primary swing – 15.6 per cent against in Wangary booth

Ceduna – Primary swing – 9.7 per cent against

Clare – Primary swing – 9.2 per cent against

Great morning to be at Victor Harbor farmers' markets campaigning with @marshall_steven and @MichaelPengilly pic.twitter.com/DrDl6CsnUV

Today I visited the MaryMacKillop schoolhouse in Penola. This week we celebrate 150years of the sisters of StJoseph. pic.twitter.com/i2ZE2papn8

In #Whyalla today with Dan VHP and @Corey_Wingard We will do all we can to keep Arrium open and save jobs #SAjobs pic.twitter.com/NrfBfueUwG

Whyalla – Primary swing – between up to 19 per cent against

Enjoying a coffee out in Gawler this morning. The redevelopment around the Golden Fleece pub is a hive of activity. pic.twitter.com/6DmQc6PFpg

Brilliant to have @marshall_steven to have helping on prepoll at Mt Barker campaigning for strong and stable govt pic.twitter.com/4T8709j8eq

The ALP has seized on the data to launch a renewed attack on Marshall’s electoral appeal.

“Nowhere Steven Marshall went did they get a swing to them,” argues Labor’s parliamentary whip Tom Kenyon.

“You can’t say he was a net positive on their campaign… Steven Marshall running all around the country [regional SA] was either a non-event or caused them damage, but it clearly didn’t improve the situation.”

Marshall rejected that interpretation, pointing out that “there were swings towards the Liberal candidates in booths that sit within my local area”.

“This is just a typical Labor distraction to try and divert attention away from their extremely unpopular policies like closing the Repat and downgrading suburban hospitals,” he told InDaily in a statement.

Indeed, he argues, “the results in areas where there have been high-profile campaigns against the State Labor Government demonstrate Premier Weatherill and his team are a drag on the Labor vote”.

“There was a swing towards Nicolle Flint in Colonel Light Gardens, which highlights the impact that State Labor’s decision to close the Repat is having at a local level.”

While there is more than a hint of mischief-making in Labor’s assault on Marshall, large swings against the Liberal brand in heartland seats could have ramifications on the state election in less than two years’ time.

The success of Rebekha Sharkie in the once-safe Hills seat of Mayo could flow on to a swag of adjoining seats, including Kavel, Davenport, Heysen and Finniss.

Kenyon argues Sharkie could make Mt Barker her electorate office hub, while the Xenophon Team will likely have three senators “who can put their offices anywhere” around SA.

“There’s no reason why they wouldn’t centre one in the Hills, in say Stirling, or in Victor Harbor or up in the Riverland… and if they win Grey, that takes in what’s now Dan Van Holst Pellekaan’s seat of Stuart, so they can further erode the Liberal Party vote,” he argued.

The previously-safe seat of Grey, which covers 92 per cent of the state’s land mass, remains in the balance today, with Xenophon candidate Andrea Broadfoot nominally ahead with early distributions of preferences.

Liberal discontent was evident in the area before polling day with party member and Port Augusta Mayor Sam Johnson lamenting on ABC radio that “when we had the closure of the Port Augusta Power Station, the Liberals were invisible [and] with Arrium, there was a sheer lack of advocacy and action”.

Kenyon said: “If that’s an indication of what traditional Liberal Party supporters are thinking in the Upper Spencer Gulf region, then Xenophon is going to find candidates and he’s going to find support.”

He argues Xenophon’s success in Mayo and potentially Grey means the Liberals have potentially “got no federal cover and a hostile local member” in corresponding state seats such as Flinders.

Broadfoot today suggested she’d be pushing for a significant taxpayer investment in the troubled Arrium steelworks, telling ABC891 “we are probably looking in the order of $300 million”.

“We are talking about the future of Australia’s steel industry [so] we will negotiate on that basis,” she said.

Incumbent Rowan Ramsey was philosophical, saying: “If I do lose the seat, the thing that happens from day one is I get my life back – and my wife as well!”

The key unknown for the state poll is whether the ongoing Electoral Districts Boundaries Commission will subdivide any of those regional Liberal strongholds in a bid to redress an alleged imbalance towards Labor that has seen it snare government in three of the last four elections without a two-party majority. 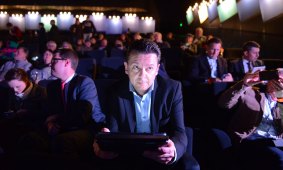 But Kenyon said the Liberals had made a “fundamental” strategic misstep in addressing the Xenophon threat.

“Their strategy was, when they saw us starting the attack ads on Xenophon, they just sat back and thought, ‘Righto, Labor’s doing all the heavy lifting’…[but] their base dropped off almost three to one compared to ours,” he said.

“You look at the primary vote swings around the state – the Libs suffered far more heavily then we did.

“Now it will come back to haunt them in the state election.”