Premier Jay Weatherill today detailed the process by which the public engagement strategy demanded by the Scarce Royal Commission will unfold as the state explores what is shaping as a divisive debate – both in the community and in the Labor Party.

And he insists that any future commitment will not leave state taxpayers vulnerable, as “it’s not something the State Government would finance off its own balance sheet”.

He reiterated the need for political consensus, albeit appearing to relegate the question of securing bipartisan federal assent to a secondary concern.

“I can’t see this being successful if one of the main political parties broke off and said ‘we’re opposed to this’,” Weatherill said, but maintained: “Ultimately it’s a matter for Government about what it chooses to do.”

Nonetheless, he argued “it’s pretty clear that unless there’s a broad political consensus in this country [a nuclear storage facility] would be unlikely to be successful”.

“This is going nowhere if it’s going to be subject to political controversy, because no serious investor will co-operate with us.”

Weatherill says the next phase of the process is to encourage people “to come together and engage in a public discussion which takes them from their top of mind opinions about this matter to wise judgments”.

That debate will be framed through a public awareness campaign kicking off today, entitled “Nu-Clear?” – and through June and July by an initial Citizens’ Jury of 50 participants randomly selected from 25,000 invitees statewide.

“What the jury will be considering is what parts of the Royal Commission report everyone needs to discuss…[it will be] a group of citizens essentially trying to establish the agenda,” Weatherill explained.

From July and September broad community feedback will be sought, before these issues are filtered through a larger Citizens’ Jury of 350 – including the initial 50 jurors – who will “clarify the choices the Government will make”.

“It’s deliberately an extensive process… the point is to put the Government in a position to make a decision at the end of this process,” the Premier said.

Less than a million dollars has been budgeted for the process until the end of June, but it is likely more will assigned in the next financial year.

A new Government agency – an offshoot of the Department of Premier and Cabinet – will also be established to oversee the engagement, together with an independent advisory board.

Royal Commissioner and former governor Kevin Scarce will also be called upon to advise on issues relating to his inquiry. 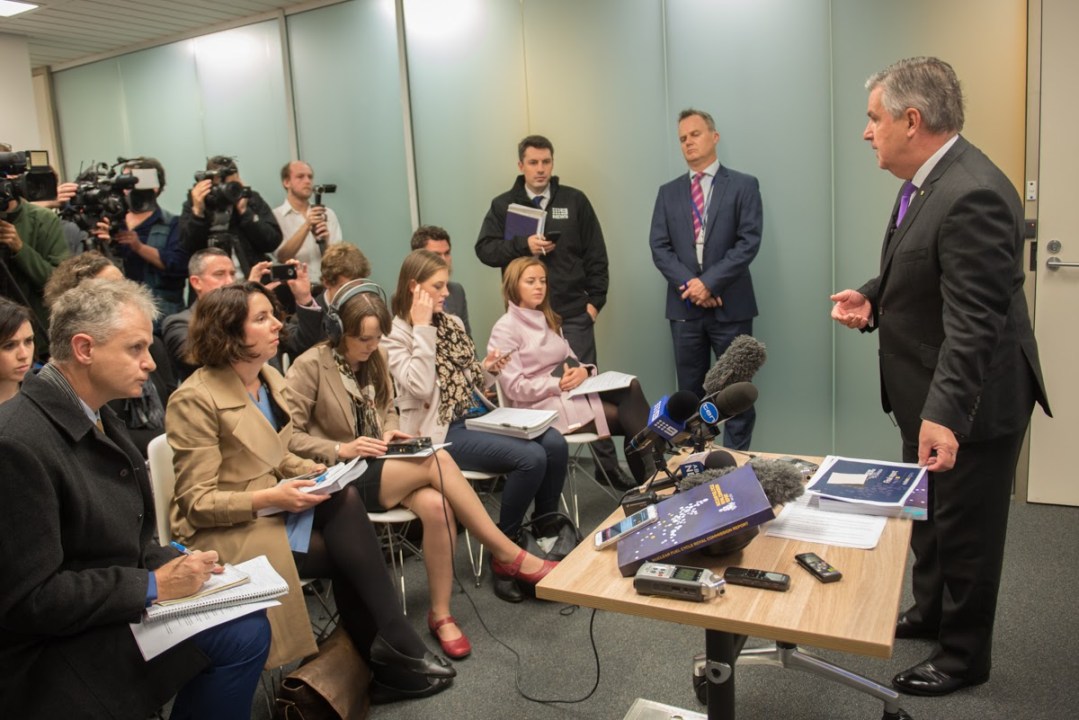 Weatherill said if the Government formed a policy view to proceed, a new process would begin to examine “more specific proposals [like] exactly what sort of facility and where it would be”.

Asked whether the Leigh Creek area and surrounding region affected by Alinta’s closure of its coal mine would be considered, Weatherill said: “That’s never been raised as one of our potential sites.”

“I don’t know whether its geological circumstances fit this, but it stands to reason any facility of this sort would be in the more remote areas north of the state,” he said.

He acknowledged the prospect of wearying the community with the lengthy consultation, admitting “there’s a tension between fatiguing people with ongoing discussion about this and making sure as many people as possible get to have the information”.

However, he said Government polling had revealed “the truth is there’s very little awareness of the Nuclear Royal Commission out there in the community”.

“Hopefully we’ll identify the things people are interested in hearing information about,” he said.

“Really what we’re consulting to reach is a position where people are saying ‘we’ve had our say and now we’re content for you to make a judgment’… that’s the qualitative judgment we need to make.”

With some on the Labor side already flagging their opposition to stepping up the state’s involvement in the nuclear fuel cycle, Weatherill insisted he was “confident in the maturity of my colleagues – and indeed the maturity and intelligence of the SA community”.

“This is a test of our democracy – can we have a mature and reasoned debate about this issue?” he said.

“There’s no wrong answer here… the crucial thing is for us to entertain this question carefully, and come up with a wise judgment for the future.”

The initial Citizens’ Jury will be selected by the Sydney-based New Democracy Foundation, which ran the state’s inaugural jury project. The Government has put the contract to oversee its deliberations out to tender.

Also today, Family First Senator Bob Day said he would renew a push to clear nuclear regulatory obstacles in the Senate if he is re-elected at the July 2 double dissolution election.

“Deregulation does not mean a free-for-all, in this context it means removing the legislated bans on having a nuclear fuel cycle at all,” he said.

He said the Scarce commission had “opened the door for a long term, nuclear energy future for SA”.

“The stars are aligning for our nuclear future… this positions South Australia well to be the Switzerland of Asia when it comes to nuclear energy, storage and technology.”