The former governor handed his findings to the Weatherill Government on Friday, with the report to be made public this afternoon.

It follows a consultation period on the commission’s tentative findings, which determined that the “storage and disposal of used nuclear fuel in SA would meet a global need and is likely to deliver substantial economic benefits”, including annual revenue to the state of $5.6 billion on average for the first 30 years of operation.

The February version of the commission’s report enthused at length about the economic spinoffs, arguing the dividend would equate to “additional revenue of about $3300 per person per year… equivalent to approximately 34 per cent of [the] current state government revenue” of $16 billion a year.

It further determined there would be an additional $2.1 billion benefit for each year of the 43 years thereafter, with a high-level storage facility potentially operational “in the late 2020s”.

The publication of the tentative findings sparked an unsurprising backlash among anti-nuclear campaigners and broader community disquiet, with Scarce himself long acknowledging that nothing could proceed without a political and community consensus, forged by a prolonged consultation. 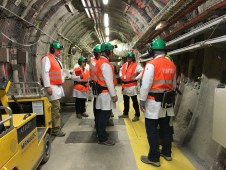 Nuclear deadline: 'The world is waiting on SA's decision'

But Scarce said in March that despite some heated responses to his initial report, “I don’t think I’ve changed my fundamental findings”.

“I think what I’ve learned is that we need to put more emphasis on the safety and explain how we can be assured that by putting spent fuel into the ground for these periods of time it’s safe to do, so that’s one lesson that we’ve had back.

As InDaily has reported, a delegation of business and political leaders returned last week from a tour of nuclear sites in Europe encouraged about the safety aspects of the venture.

InDaily will update readers with a special afternoon edition after the final report is released.