Butler, a close confidante of Premier Jay Weatherill, released a letter addressed to Snelling, on Facebook this morning, urging the Government to call an immediate halt its plans for the Queen Elizabeth Hospital.

“I am concerned that the proposals relating to the QEH are undermining the western suburbs community’s confidence in the hospital’s services,” Butler writes.

“Having spoken to clinicians and SASMOA, I support their call for the proposed shift to be suspended pending a revised evaluation of an acceptable model and costings.”

The letter says that the “withdrawal of some acute services – especially cardiology – from the QEH before the new Royal Adelaide Hospital has commenced operations and demonstrated its ability to provide high quality acute and emergency care to our community is causing a high degree of unease”.

“… I am particularly concerned about the negative impact the proposed shift will have on the first-class geriatric unit at the hospital, but also on palliative care and respiratory services.”

Butler said he was supportive of “a strong rehabilitation capability in a hospital like the QEH, but clinicians from Hampstead and the QEH agree that the model and budget proposed by the Department are unacceptable”.

“Any relocation of rehabilitation services to the QEH must not come at the expense of the hospitals excellent range of existing services,” his letter says.

Snelling told reporters this afternoon that “Mark’s entitled to his opinion – it’s not one that I share”.

“We have always been quite upfront that we have more work to do with our clinicians at the QEH,” he said.

“Stephen Wade himself said last Friday that the principles of what we’re trying to do at the QEH have overwhelming clinician support; the point has always been about how we do it.”

Snelling said that there were too many people having to travel from the northern suburbs to QEH during a heart attack.

“In South Australia, we have approximately 500 people more dying each year than we have at benchmark hospitals interstate, and that’s just not good enough, and I’m determined to make it better,” Snelling said.

“We do have to rejig our services right across Metropolitan Adelaide – of course that’s difficult.

SASMOA President Dr David Pope said clinicians at the QEH were concerned about a lack of infrastructure to cope with the move of rehabilitation services from Hampstead Rehabilitation Centre to the Queen ‘Liz.

But Pope said that was not all they were worried about.

“They’re complaining about the decimation of the existing services [at the QEH],” he told InDaily.

Pope said Butler’s intervention “sends a message to Minister Snelling that he needs to listen to clinicians”.

Snelling conceded that there had been “concerns among clinicians about … how we basically fit a lot more services onto the QEH site and who gets displaced”.

“We’re working through those issues,” he told reporters this afternoon.

“No final decisions have been taken about how we achieve the ends that we want to achieve. 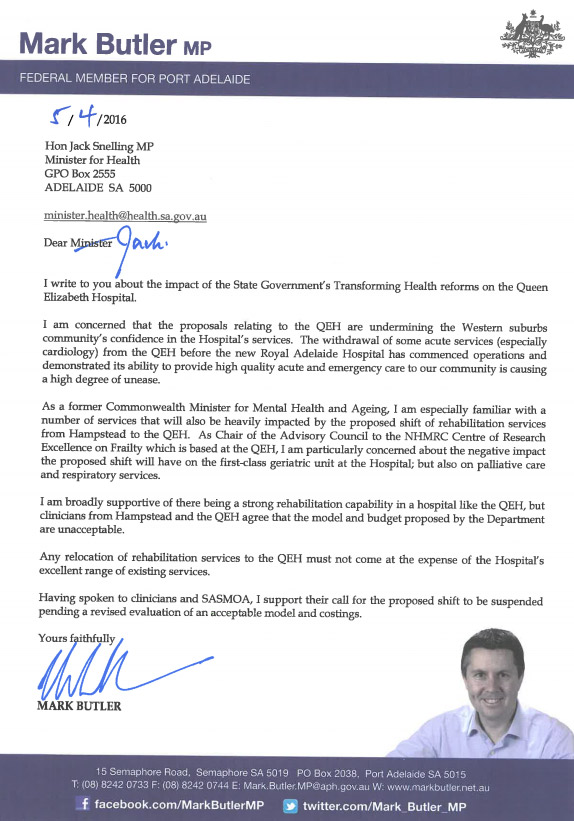 “Health Minister Jack Snelling is now dangerously isolated with even his Federal colleagues publicly voicing their deep seated concerns about his radical plan to cut services at half of Adelaide’s public hospitals and close down the Repat,” Wade said in a statement this morning.

“As a former Federal Minister for Mental Health and Ageing Mark Butler is well placed to understand the consequences of downgrading health services at the QEH as part of Transforming Health’s radical budget cuts.”

Wade said a survey of surgeons revealed that 84 per cent did not support the implementation of Transforming Health, though the Government claims opposition to the plan was far smaller than that.