More than 100,000 patients would be left untreated each year, by 2024-25, under funding cuts announced in then-federal Treasurer Joe Hockey’s first budget, says an Ernst & Young report released by the State Government this morning.

According to the report, Commonwealth cuts to hospital funding would leave South Australia with a shortfall of about $2 billion a year by 2029-30 – similar to the total cost of the new Royal Adelaide Hospital.

The report projects a gap between demand and supply for hospital procedures of 12 per cent – meaning thousands of patients would be left untreated each year.

“The result of the Commonwealth reduction in indexation also leaves unmet demand in the order of 12 per cent per year or approximately 128,000 separations (completed hospital treatments),” the report says.

“The unmet demand will have a significant impact on the waiting times for public procedures.

“The exact impact would depend on the treatment desired and the severity of the condition.” 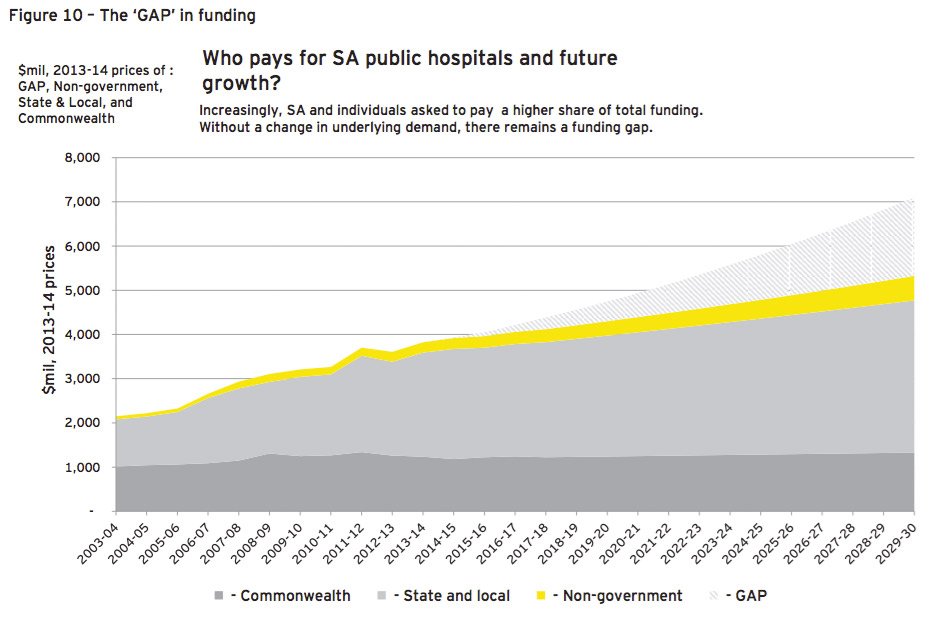 Over time, private hospital care is projected to overtake public hospital care, meeting 53 per cent of total demand by 2029-30. 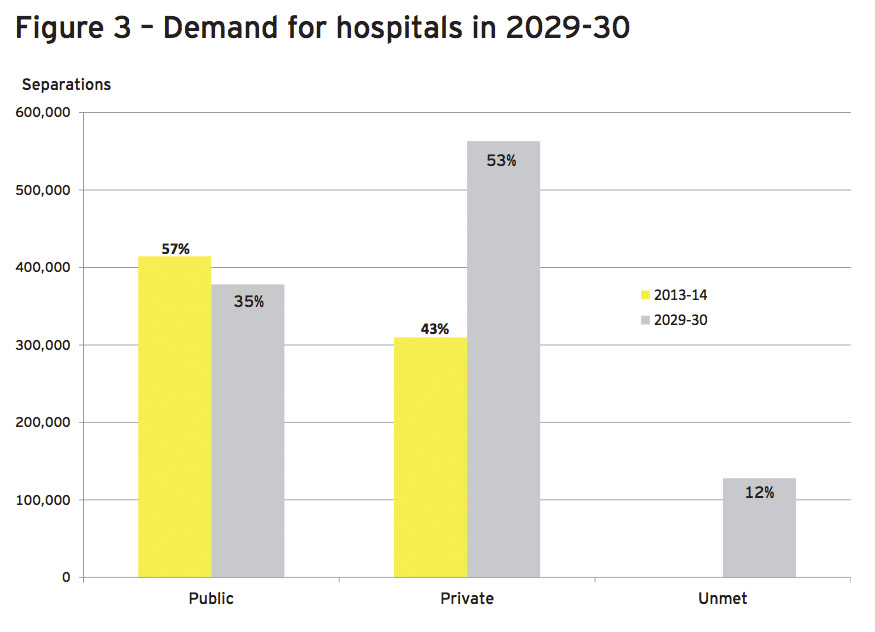 Private hospitals are projected to meet most of the demand from South Australians by 2029-30, the report says.

Public hospitals would, by 2029-30, meet just over one third of the demand, with the remaining demand for hospital treatment left unmet.

The overall proportion of South Australians privately insured would increase, but those health insurance policies would become more expensive: an extra 0.5 per cent more expensive each year, the report says.

As a result, younger South Australians would be less likely to take up a health insurance policy.

“New policies would usually reduce premiums in the private health system however, in this case, those individuals are also more likely to utilise the policy,” the report says.

“This increases costs in the system faster than revenue increase.” 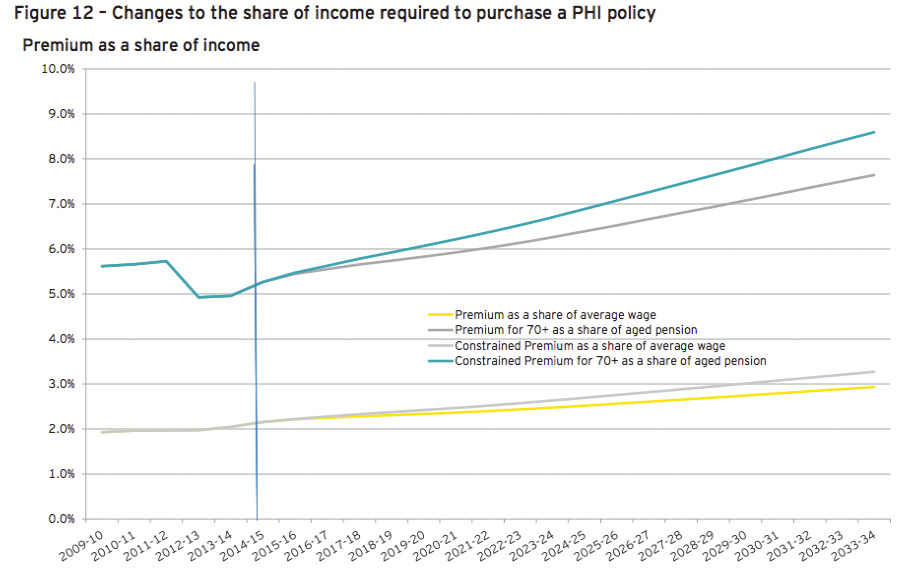 Health insurance would take a larger proportion of a pensioner’s income by 2029-30, the report says.

Premier Jay Weatherill told morning radio programs he had had a phone call from Prime Minister Malcolm Turnbull indicating the Commonwealth Government was willing to reduce the size of the funding cuts.

It follows a report in The Australian this morning that the feds were willing to reduce the cut by $5 billion.

But Weatherill described the concession as “a drop in the ocean”, and a “bandaid” solution.

He said he would campaign ahead of a COAG meeting next month to see the full $57 billion cut to health budgets across the country restored.

“The Commonwealth have turned themselves inside cout to come up with $5 billion to meet a $57 billion hole,” he told FIVEAA radio this morning.

“Healthcare costs are threatening to basically consume our whole budget – that’s why we reached an agreement with the previous Federal Government around sharing the load.”

CEO of the Australian Nursing and Midwifery Federation (SA branch) Elizabeth Dabars told InDaily it was incumbent on the Government, and the Opposition, to be up front about their hospital funding policies.

“What isn’t clear is how much money the Prime Minister and Treasurer are proposing,” said Dabars, and there had been “absolute silence” from the Opposition.

“Both of the major parties don’t have a position on whether they’re going to reverse these cuts,” she said.

Dabars said it was unfair to the electorate that, with the possibility of a July double-dissolution election looming, neither major party had given their position.

This situation, she said, only perpetuated the federal-state “blame game” over health funding more generally.