At least, that’s the implication of the Weatherill Government’s spending commitments in its $24 million Northern Economic Plan, the long-awaited jobs blueprint designed to offset the demise of automotive manufacturing and its associated fallout for the marginalised northern suburbs.

Unveiled today after being flagged early last year, Premier Jay Weatherill said the plan’s objective was to create 15,000 jobs by 2025 – “but we want to create as many jobs as we possibly can”.

Its centrepiece is a $10 million Small Business Development Fund “to encourage small businesses to grow and create sustainable jobs”.

Weatherill’s oft-spoken insistence that such jobs will be in emerging sectors such as food production and health services is highlighted by $7 million “to attract anchor tenants to the Northern Adelaide Food Park”, to be based on land adjacent Parafield Airport, and $4 million for a new Disability Employment Hub which will train former automotive workers and encourage students to work in the disability sector.

But beyond the focus on redeployment, there is a minor emphasis on young people, despite the north’s youth unemployment rate persistently languishing.

The plan contains a $100,000 investment in a “live music activation strategy… building on the region’s rich musical history”, in deference to the northern suburbs being the cradle of iconic Australian acts such as Cold Chisel and The Angels. There is also $50,000 for a “youth resilience and empowerment program” to be delivered by the Port Adelaide Football Club’s community arm, Power Community Ltd.

The Premier said the investment, mostly new money, would combine with closer ties with local government agencies forged during the consultation process “to advance our 10 economic priorities [to] help to deliver job opportunities for the people who live, work, study, and invest in our northern suburbs”.

“South Australia is in a state of transition and the northern suburbs of Adelaide are facing many significant challenges – most significantly, the departure of Holden next year,” he said.

He said a range of sectors provided “opportunities for growth”, despite the malaise.

“We have ambitious targets set out in this plan, but we’re backing it with real money,” he told reporters at the Bickford’s factory in Salisbury.

But the Opposition remained unimpressed, with Liberal leader Steven Marshall telling InDaily: “We don’t think it goes nearly far enough, and doesn’t address the fundamental problems of why businesses are leaving SA.”

“It’s a grants program – we’ve got the Government picking winners with a range of grants,” he said.

“It’s more about [Labor’s] media strategy than changing the fundamentals and addressing the reasons businesses are leaving… there’s still too much red tape and no long-term plan for productive infrastructure.”

But Civil Contractors Federation CEO Phil Sutherland said the plan recognised “that a ‘one size fits all’ approach to the state’s jobless and slow economy isn’t the solution”.

“SA is a patchwork of micro-economies and these demand highly targeted stimulus,” Sutherland said.

He called on the Premier to emulate the blueprint more widely, “and apply [it] to the multiple regions across SA”.

“We should never overlook the proven job-creating and economic multiplier effect of public investment in transport and other infrastructure… regional economic plans must include a large dose of infrastructure – it’s a no-brainer,” he said.

The plan also received praise from a trio of local mayors, with Salisbury ‘s Gillian Aldridge insisting “the north is ready” for the new industries and technologies highlighted therein.

“We are in the spotlight and we are going to see things happen,” she said.

Port Adelaide Enfield Mayor Gary Johanson, who ran as an independent against Labor’s Susan Close in a Port Adelaide by-election to replace the retiring Kevin Foley, was effusive about the Government’s approach, and called on the federal Coalition to contribute funds.

“This is the sort of action we need to regenerate this state,” he said.

“This is the very first time I’m aware of that we’ve seen such close collaboration, where we’re bounding ideas off each other.

“There’s no magic bullet, no rabbits coming out of hats… this is a blueprint for hard work, for dedication and vision [and] if we abide by it, we can learn from it and we can all prosper.”

He said he and fellow mayors Aldridge and Playford’s Glenn Docherty had been given unprecedented access to Automotive Transformation Minister Kyam Maher, who last week added employment to his ministerial portfolios.

“Where is the Federal Government? Where [are] their initiatives, and where is their money to back this worthy plan?” Johanson said.

Weatherill agreed “we need a willing Commonwealth partner to back in this plan”, calling on Canberra to “keep their promise to build 12 new submarines here in the north”.

“There’ll be thousands of jobs that emerge from the Future Submarines project [but] there’s a range of other projects we want to advance to the Commonwealth,” he said.

But the plan doesn’t ignore the region’s manufacturing culture, with $2 million to trial locally manufactured electric/diesel bus prototypes and a $1 million grant for a naval shipbuilding supplier to upgrade infrastructure and equipment, provided it wins a commercial contract.

A $500,000 grant is also earmarked for an “advanced modular construction industry alliance… with a particular focus on the mining, resources, and energy sector”.

Weatherill conceded jobs in the emerging sectors – which have been traditionally dominated by women – were “not for everyone”.

“But people have a lot of resilience, and a lot of skills they may not presently be using,” he said.

AnglicareSA CEO Peter Sandeman, who last month told InDaily of his fears for a jobless generation in the north, said the co-operation of the three local councils was perhaps more significant than the State Government’s capital investment.

“The governance they’ve pulled together will be the really important focus for the north,” he said today.

“If those councils start really hanging together and doing things for the benefit of the whole region rather than individual councils, that really does shift the dynamic.”

He said the $24 million was “not a lot of money” but conceded “it’s the fact there’s a common focus for effort that people in the north can cluster around”. 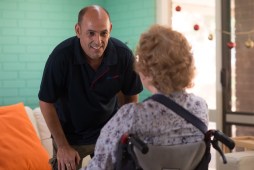 “The other really good thing from my perspective is that the social and economic elements [of the package] are bound together [whereas] often social infrastructure is a poor second cousin, if not totally unrelated,” he said.

“People have to see a common cause to get us through the tough times we’re going to face… we’re yet to see the full impact of Holden and the supply chain.

“I don’t underestimate the challenge because it’s really the hope of the next generation that’s going to be the big factor in whether or not the north has a future.”