If the former Premier knew it would be the last of these regular gatherings, he was perhaps the only one who did.

His one-time Attorney-General Chris Sumner was one of those present, as was “a friend who had driven across from Canberra, because he’d heard John wasn’t too good”.

“They sat next to each other, and had a terrific chat about things … John was completely with it and he listened well,” Sumner reflected today.

“It was a small group that often dined together – we’ve been doing it for donkey’s years – but we were very privileged that we managed to fit it in.”

“That’s just the way he was – he wanted to have the dinner,” said Sumner.

“We obviously knew he was very, very unwell and battling on, but we weren’t to know it was going to be the last time we saw him … it was quite extraordinary, because he kept on his feet doing things to the very last moment.”

The next day, John Charles Bannon died peacefully in hospital, aged 72. He was surrounded by his family, who today accepted Premier Jay Weatherill’s offer of a state funeral.

As Sumner tells it, that “fortitude and courage to do as much as he could” despite his illness is a trait that defined him to those that knew him well.

It was a trait they saw in his resolve to work through the State Bank crisis, despite knowing that his own political cause was lost.

A statement this morning from the Bannon family says: “A marathon runner to the last, John was determined to see through a number of milestones in his final weeks, including the first Australian Day/Night Test cricket at the new Adelaide Oval and presentation to the Prime Minister as an Expert on Federation.”

“Just two days ago, he spoke eloquently at the opening of an exhibition celebrating his late father Charles Bannon’s artistic work,” the statement adds.

Sumner was also present for the speech, which he says was given off the cuff for around 20 minutes, and was “quite brilliant and very moving”.

“It was a very lovely, empathetic but realistic portrayal of his father’s life, career and personality,” he said.

On Thursday, Bannon was in Sydney for his role on the Government’s expert panel on federal-state relations, where he addressed Prime Minister Malcolm Turnbull, who today recalled: “He spoke with the wisdom of experience and the clarity and enthusiasm of someone totally committed to the issues of today and the challenges of tomorrow.”

His last days, like his last years, were industrious.

“He was diagnosed with the cancer seven or eight years ago, and he’s just fought on in an incredibly courageous way,” Sumner said.

“He’s always taken the view that he’d get on and do as much as he possibly could do in the circumstances that he would normally otherwise have done, and that’s what he did.”

Sumner says “a good number” of Bannon’s post-political highlights came since that initial diagnosis, including penning a well-regarded tome on the life of Sir John Downer.

His was life of high achievements blighted by a single crowning failure.

Adelaide personality Keith Conlon was a school and university contemporary of Bannon’s who eventually locked horns with him as a media interviewer in the aftermath of the State Bank collapse.

Conlon recently told InDaily he and others were in awe of the young Bannon’s aptitude in academic and sporting life, his zeal for the contest epitomised in this post-match interview after his beloved Roosters won the 1991 flag:

But their relationship really gelled when they trod the boards together in the university Footlights revue.

Sad news for those privileged to act with John Bannon in Uni Footlights revues. We will miss our so widely talented and committed friend.

Conlon last night said he was “shocked to find out John has gone”.

“An absolute standout member of our generation … so richly and broadly talented,” was his assessment.

“And he employed those talents with a strong sense of purpose and public service. His many friends will lament the loss of an unaffected, witty and passionate soul,” he said.

But for all today’s wistful remembrances, Bannon’s final two decades saw him bear a heavy cross of personal culpability and some public antipathy.

“I think John took pretty well total political and personal responsibility for the State Bank collapse, and stayed in Government to work as Premier to try and sort out the problems until he retired,” Sumner reflected.

He separated the bank’s assets to delineate the “good bank” and the “bad bank”, and Sumner argues “it’s not often realised how much of the final $3 billion was ultimately recovered”.

“He worked hard at recovering quite a bit of the debt (and) that’s one of the great tragedies, in pure political terms … as Treasurer he’d worked extraordinarily hard from 1982 until he retired to deal with the state’s finances. In purely financial terms as Treasurer he worked very conventionally in modern fiscal terms to reduce the state debt in SA.

“In a personal sense, he was a very careful person; he looked after the state’s resources very carefully, he was quite frugal in his own personal habits with public monies and the like, he travelled economy class in Australia…

“The State Bank collapse set aside all that good work… The legacy of the Bannon Government can’t ignore the bank and all the implications of that, but while he took personal and political responsibility for it, I think in personal terms he really took the whole responsibility somewhat unjustly.”

Sumner argues that after the initial Jacobs Royal Commission report, subsequent inquiries were kinder to Bannon’s legacy, instead focussing ire on “the bank’s board, the managing director and other people who basically didn’t do their job”.

“The fact of the matter is the Government was very, very badly let down (but) unfortunately the politician sits at the top of all this, and has to take responsibility – as John did,” he said.

“He did cop it on the chin, and he did work hard to right it as much as he could. A very substantial proportion of that loss that’s referred to was in fact recovered over time (and) all that having been done he resigned as Premier, which I guess was pretty inevitable, and we lost the election.” 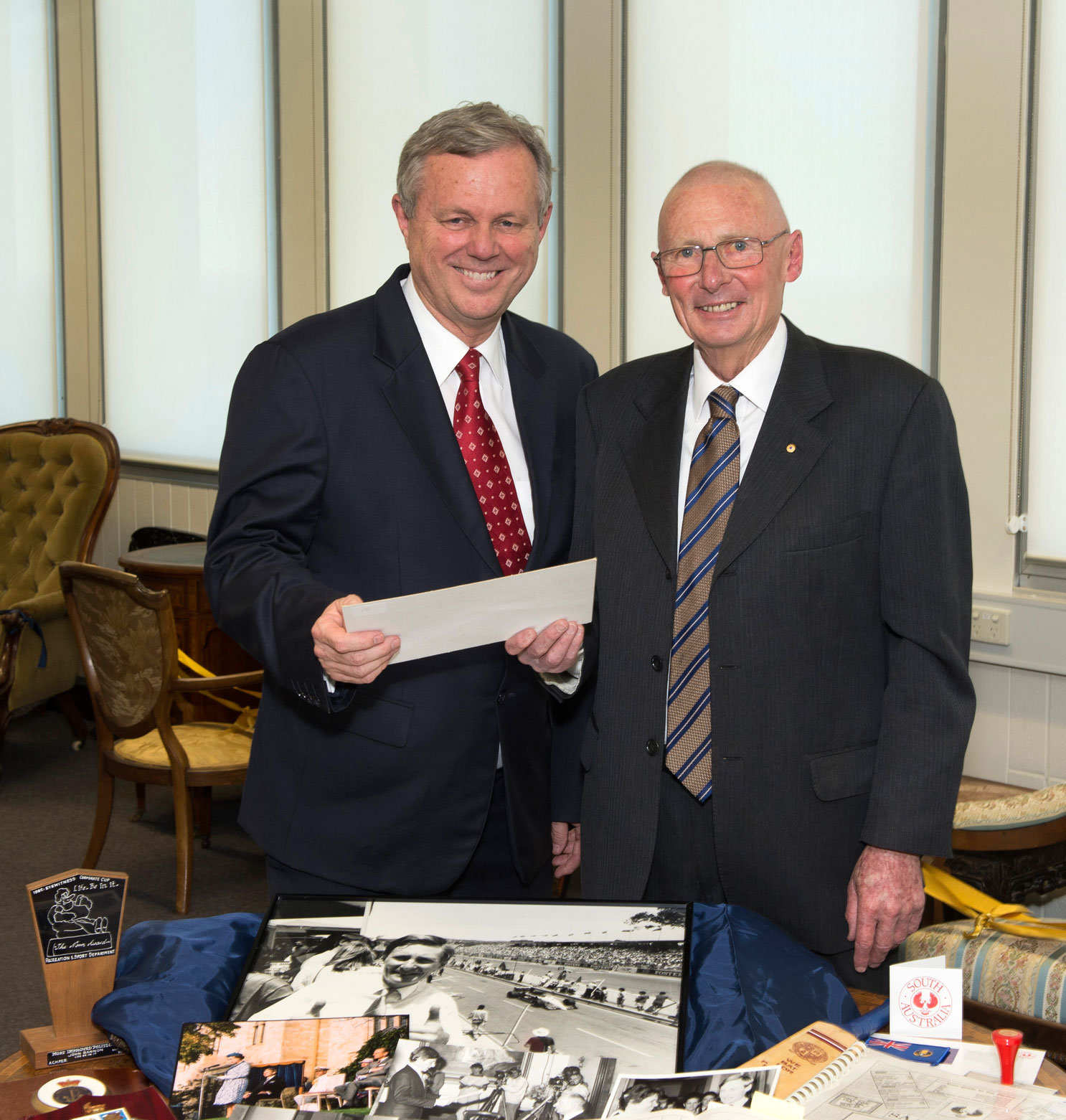 Beyond this though, Sumner argues that “a lot of other initiatives the Government put in place across law reform, education, the environment… were all mainstream Labor social democracy initiatives that I think continued in the Dunstan tradition”.

He argues that the key project of the era, rarely cited, was in fact consolidating the submarines’ construction.

“The subs project was a big initiative that I think was pulled off in significant part because of his planning and negotiating skills,” he said.

“That’s an industrial project that’s still with us.. and hopefully will continue beyond the current period.”

If Bannon’s legacy is divisive, it is also a legacy made up of symbols, both good and bad.

The era has come to represent the financial excesses of the 1980s, and yet Bannon’s own persona exuded frugality and discipline. And if, as Sumner argues, the shadow cast by the bank’s legacy is oft-overstated, he is quick, too, to play down the spiritual high-point of the era.

“The Grand Prix was probably overestimated in terms of how important it was in the scheme of things,” he said.

“But it was definitely a plus in terms of exposure of the state from a tourist perspective.”

Sumner says the exiled Premier “was obviously personally devastated by where it ended up” with his Government’s economic legacy.

“But he didn’t just take his bat and ball and go home; he made a very, very significant post-political career.”

Indeed, his eight-year tenure as Master of St Mark’s College, his alma mater, would be seen in the context of other careers as a pinnacle, rather than a footnote.

Former Supreme Court judge Rod Matheson QC was chairman of the college council that “unanimously” appointed the former Premier in 2000.

“He was an outstanding Master,” he told InDaily.

“He was a leader in all aspects of the college community, certainly intellectually and sporting.”

Moreover, the college accounts were in surplus for each of his eight years at the helm.

Matheson says the student pass rate improved during that time from 89 to 94 per cent, and Bannon oversaw the completion and restoration of several buildings.

“He had a great interest in the library, which was substantially improved during his time,” he said.

“He was very successful as a fundraiser for the college.”

The long-time marathon runner would often be seen jogging in the early mornings, accompanied by his students.

“He really was a most outstanding person… I miss him greatly,” Matheson said.

The outpouring across SA and the nation today belies a relationship with Bannon’s former electorate that appeared posionous when he left office, his party politically decimated. But even his political opponents are lining up to sing his praises. His nemesis John Olsen spoke on ABC radio  of “the genuine and sincere nature of the man… a measure of the way in which he tackled the tasks in front of him, the way in which he changed and modernised Labor in SA“.

Businessman Ian Smith, who worked for one-time Liberal leader Dale Baker, told InDaily Bannon never sought to exploit his boss’s own travails for political gain, and carried himself through his last days in office with “extraordinary balance, almost a nobleness”.

As a cheeky young Liberal staffer, when the first Jacobs Royal Commission report was published, Smith took it down to Bannon’s parliamentary office and asked him to sign it.

John Bannon wrote this when I was a young Lib advisor. Took responsibility but was never to blame. Such a good man pic.twitter.com/dXtDCpb1Yn

As Turnbull said today, Bannon led his state through its toughest times, but continued to make a contribution to public service, as someone that despite his political demons “was loved, admired and well-respected by all who worked with him”.

But, of course, his family will miss him most of all, those who held him up after his political fall, and ran alongside him in the most gruelling marathon of all.

“For his family, he will always be cherished as a husband, a brother, a father, a grandfather and dear friend,” their statement reads.

“We will miss his wise and witty stories, songs and poetry readings at family gatherings, especially at this time of year… The outpouring of love and support from friends and acquaintances has been an incredible source of strength and made this difficult time easier to bear.”