Crime scene investigators and detectives from major crime have examined in the area where the fire is known to have started, on the western edge of the fire ground.

Police said that while the cause remains unknown, initial investigations appeared to show the fire was not deliberately lit.

At a press conference this afternoon, Premier Jay Weatherill confirmed that two people had died in the fire which started near Pinery yesterday.

Sixteen people have been hospitalised, five of whom are in a critical condition. Thirty people have been treated by ambulance crews for various injuries including burns and smoke inhalation. One of those in hospital has suffered burns to more than 80 per cent of their body.

This afternoon, Weatherill said that there were no people listed as missing in the bushfire, but there remained a possibility of further fatalities and injuries.

Authorities says the two people who died yesterday were a 56-year-old woman from Hamley Bridge and a 69-year-old man from Pinery, identified this afternoon by friends as farmer Allan Tiller.

At least 16 homes have been destroyed, alongside 22 other significant buildings and “dozens” of vehicles and farm machinery.

Weatherill said the number of buildings confirmed destroyed was expected to increase.

Advice this afternoon was that the fire was still going, with sporadic blazes across the fire ground.

The CFS said about 60 per cent of the fire was contained. About 85,000 hectares had been burnt in the fast-moving fire. By comparison, the Sampson Flat fire earlier in the year burnt more than 12,000 hectares over many days.

Prime Minister Malcolm Turnbull and Opposition Leader Bill Shorten each paid tribute to emergency service volunteers and staff, and extended their sympathies to the people of South Australia in federal parliament this afternoon.

Both urged Australians to ensure they are well prepared for bushfire. 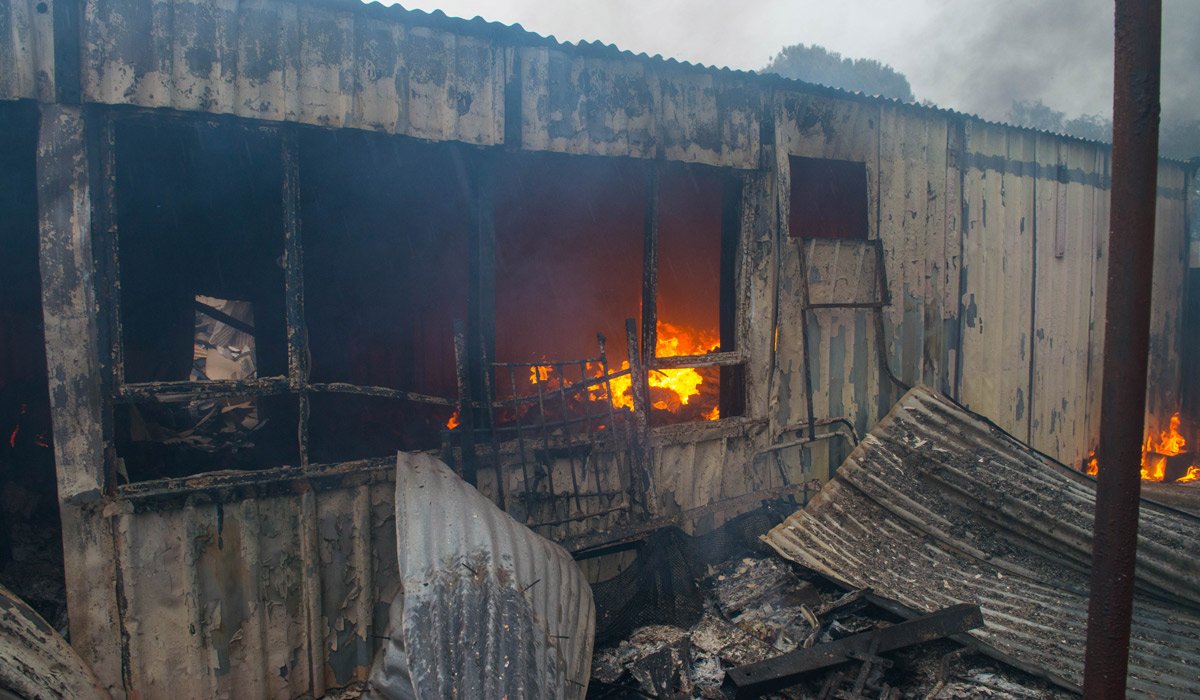 Weatherill said this morning that even though a significant proportion of the fire perimeter was under control and conditions were milder overnight, “many fire fronts are still active within the fire grounds and they will continue to be battled for some days”.

“Areas of concern for today are focused on the eastern flank of the fire,” said Weatherill. 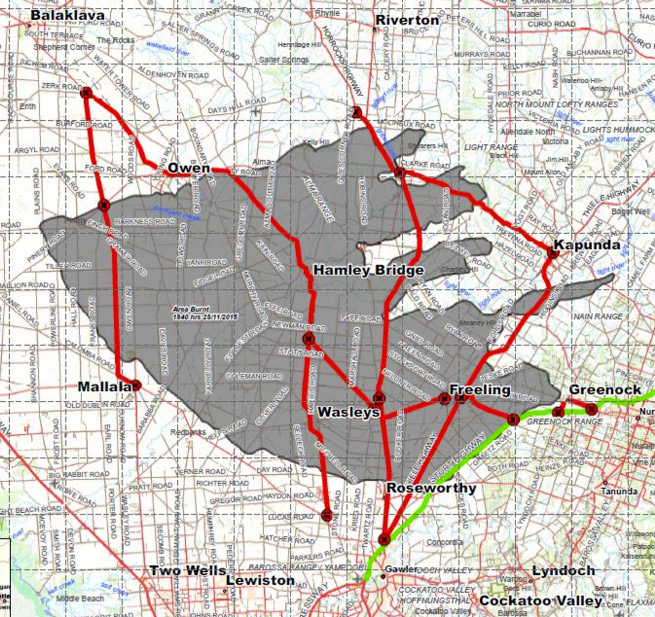 The fire ground (grey) and closed roads (red) as at 10am. Image: SAPOL.

Fires are still burning within the current perimeter and there remains the risk of breakaway fires.

Authorities hope they will be able to declare the fire contained within the next two to three days.

Weather conditions had improved through the day.

“What we’re expecting today is cooler temperatures, higher humidity, but the winds will still be up [at] 25 to 35km/h.

“There’s the potential … that we may have a number of burning trees and logs that are close to the burnt edge, and any one of those trees can topple over and into unburnt country, and with winds of 25 to 35km/h there’s still potential for breakaways from that fire to occur.

“That will be the case for the next two to three days.” 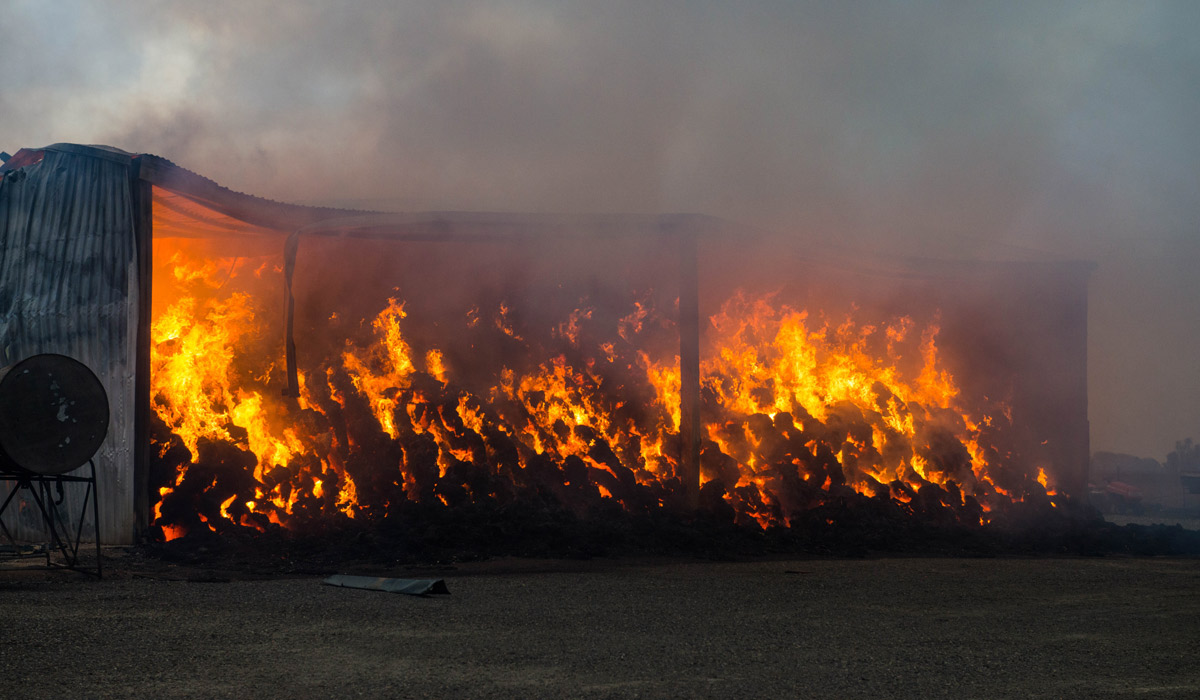 A hay shed burns on a property near Freeling. Photo: AAP / Brenton Edwards.

The fire has burnt an estimated 85,000 hectares of grass, cropping land and scrub.

“Further to this, a significant number of stock and crops have been lost, including a piggery with an estimated 2000 sows,”  Weatherill said this morning.

“Livestock assessment teams from Primary Industry and Regions SA will be available from this morning to assist landowners’ assessment of their burned or injured livestock.”

About 400 fire fighters have been involved and 70 fire fighting appliances have been deployed. Another 200 personnel are on their way from Victoria. 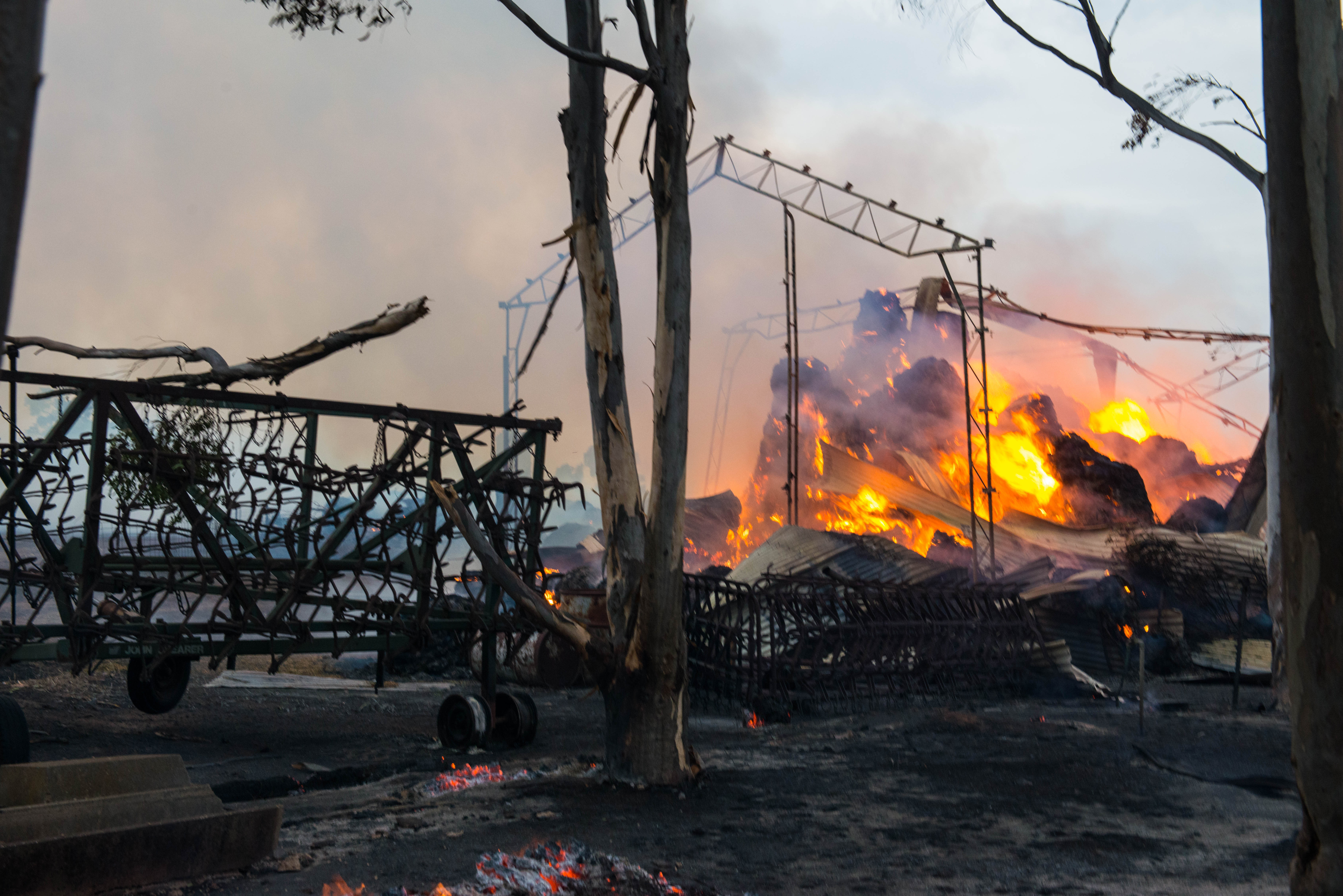 A shed burns at the entrance to Freeling on Wednesday. AAP Image/Brenton Edwards

Relief centres are in place at the Gawler Sport and Recreation Centre, the Balaklava Racecourse and the Clare Showgrounds.

Authorities are working to clear roads affected by the fire to allow residents to return to properties. Go here for the latest road closures.

Livestock assessment teams from Primary Industry and Regions SA were on the ground on Thursday to help land owners assess and deal with the burned or injured livestock.

Impact teams from the CFS, MFS, police and SES have been combing every area of the accessible ground for a full assessment of damage.

“A devastating fire so early in the season … reminds us of the need to be prepared and plan for these events,” said Weatherill.

Whether in rural or regional areas or metropolitan Adelaide, this ia a reminder for us to please update your bushfire action plans.”