As InDaily reported last week, Haese is spearheading a push to roll out a free internet service on “every main street” in every council area in the state.

The notion, flagged amid a recent jobs summit as a way to generate economic activity, is predicated on the city’s free WiFi program, a joint venture between the council, State Government and Internode.

He said WiFi access was “just becoming almost a hygiene factor” as “people travel anywhere and look for a café that’s got it”.

Asked what he meant by “hygiene factor”, Haese replied: “An essential service, I guess, is what I mean.

But the Adelaide scheme has thus far struggled with expectations, amid complaints about the effectiveness of the free network.

Jill Bottrall, SA and NT corporate affairs manager at the national broadband network NBN Co., told InDaily: “If you’re going to provide a free WiFi service, make sure it actually works for people and is fast enough to be effective.”

Bottrall said the NBN will provide the means to facilitate such networks “but retailers and companies provide the actual service to the end user”.

CBD broadband is currently provided by Telstra, with NBN fixed line services to be installed there by early 2018.

Haese said he’d been advised the city network was used by “up to 6000 people at any given time” and had 30,000 unique users per day, which has “pretty well exceeded the expectations of what all stakeholders had of it”.

“I’ve been advised that (under) the service level agreement in place with iiNet (which owns Internode) … we’re meeting 98 per cent of our performance targets,” he said.

“However, I think you could argue the uptake in usage has maybe exceeded expectations… When you’re the first (to do something), sometimes you’ve got the steepest learning curve.

“We’re working on getting this right … there may be some parts that are not as good as we expected, or parts where volume is extraordinarily high.”

“If you’re uploading video or doing a few more things, it may not meet everyone’s expectations (and) we’d be taking that into account,” he said. 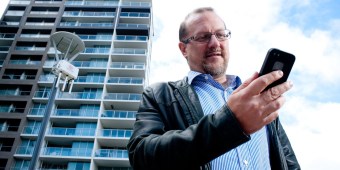 Free WiFi for all as councils push for job creation

“Everybody wants to have a high-quality service … if there are tweaks to be ironed out, we want to fix that. And we will, and we are.”

He said the proposal to “progressively” broaden the free network had resonated with several local council representatives, and “I ran it past the Premier as a discussion point and it seemed to resonate with him too”.

He said for now he was “building consensus” around the plan: “It’s ultimately going to be up to my fellow mayors – if they think it will be a competitive advantage, they’ll undoubtedly put it to their councils (but) from our experience it’s been a real win.”