The fourth ratings survey of the year, released this morning, shows the ABC’s local station increasing its lead at the top of the table, thanks to a powerful performance by its breakfast team of Nikolai Beilharz and Stacey Lee.

The pair, who took over from Ali Clarke this year, have climbed to a massive 18.9 per cent of audience share – up from 16.7 in the previous survey. A huge distance back in second place are FIVEaa’s Will Goodings and David Penberthy, who improved slightly to hit 11.8 per cent.

Apart from the ABC’s dominance, the biggest story in today’s ratings is the performance of Mix’s breakfast team, led by Ali Clarke. The show has been struggling for ratings traction and dropped 1.9 percentage points to hit 6.9 – the lowest share in the shift of any local station.

Overall, the ABC has a clear lead over Mix, followed by Nova, an improving SAFM, and a strongly surging Triple M. 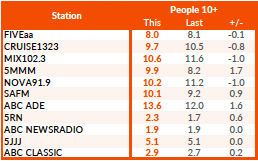 FIVEaa again lost share to remain the lowest-rating of the local stations, only ahead of the ABC’s national stations.

Mix’s trouble in breakfast echoed across the schedule: every shift lost listener share.

FIVEaa is in more strife – entrenched at the bottom of the rankings and with a demographic conundrum. Its flagging performance among the oldest listeners will likely keep it in the cellar unless it can arrest the trend.

The commercial talk station’s two brightest spots are breakfast – where it has clawed back outright second place – and the evenings, where it remains the clear leader.

The ABC, which won its first overall ratings since 2017 at the end of last year, has now taken the ratings crown in two consecutive surveys.

As well as the leading breakfast team, the ABC’s mornings program, with veteran David Bevan, is dominant, while afternoons, drive and evenings remain solid.

Mix hangs on to the lead in afternoons, while SAFM has snuck ahead in drive, thanks to a plummeting performance by Nova. The evenings remain FIVEaa’s bright spot, with Jon Blake followed by Matthew Pantelis leading the way.

Overall, though, FIVEaa is now a significant 1.7 percentage points adrift in bottom spot. Demographically, it is struggling to compete with the ABC in the oldest age group – people aged over 65 – with 15 per cent of listener share compared to the ABC’s 30.4 per cent.

While it improved its share in some of the younger age groups (55-64 was notably better for the station), these are more heavily contested – and it seems highly unlikely FIVEaa could ever compete in a serious way in these demographics without sweeping changes to its programming.

Its afternoons show dropped further to an almost inconceivably low 3.4 per cent of listener share, while its drive sports show – once the jewel in the station’s crown – has plummeted to 6.2, not even within striking distance of anyone else and a full four percentage points behind its sports rival Triple M.

In the middle of the AFL season – albeit one in which the local teams aren’t performing well – FIVEaa’s weekend ratings remain the lowest of the local stations.

Mix is also in an increasingly difficult position. Its headline-grabbing move to recruit the ABC’s breakfast star Ali Clarke has not resulted in the expected boost in the key shift and the perennial ratings leader is now in a battle to keep its runner-up spot.

There were signs that a decline was on the way before Clarke was brought on board, but to be ranked dead-last in breakfast a few surveys into the new experiment is a conundrum.