Survey three for 2022 – which ended on the federal election day – saw the ABC’s local station take back the lead it sensationally wrested from perennial leader Mix 102.3 at the end of last year.

In survey two this year, Mix and Nova were locked in top spot, but the ABC has leapfrogged the FM stations with strong performances in most shifts, notably breakfast and mornings. Mix is in second spot, followed by Nova, Cruise, SAFM, Triple M and FIVEaa.

The ABC’s relatively new breakfast team of Stacey Lee and Nikolai Beilharz extended their lead at the top, putting on 0.9 percentage points to hit 16.7 per cent of listener share. Their nearest rivals are Nova and FIVEaa – both on 11.1 per cent and both of which lost listener share.

The ABC also leads mornings, where veteran David Bevan put on a huge 2.3 percentage points to overtake Cruise and Mix.

Mix took back top spot in afternoons from Cruise, while Nova easily leads in Drive, despite a softening in its audience share. FIVEaa leads in evenings, despite losing some listener share.

Radio managers across the city will be worried about some of the numbers in today’s GfK data, but none more than those at FIVEaa.

The once-powerful station is languishing at the bottom of the table – only rating better than the ABC’s national stations. The evenings line-up of Jon Blake followed by Matthew Pantelis maintains its lead, while the breakfast team of David Penberthy and Will Goodings were equal top of the commercial breakfast teams. However, the rest of the line-up is soft, to say the least. The afternoon slot has become irrelevant, dropping to an eye-wateringly low share of 3.9 per cent in this survey. It has the worst-performing drive shift and weekend roster of the local stations.

Mix management will also have some concerns, despite being the leading commercial station. The new breakfast team led by star ABC recruit Ali Clarke lost significant share in this survey to be line ball with commercial rivals Cruise and SAFM, and behind Triple M, Nova and FIVEaa.

Apart from the ABC, only Triple M and SAFM increased their overall share of listeners.

Looking at the demographic data, the ABC’s success can be traced to the oldest listeners: it leads the way with the over 65s and is second to Cruise among people aged 55-64. In both of those categories, the ABC increased its share.

Interestingly, Mix lost share among all age groups except for the 40-54-year-olds where it put on a huge 5.3 percentage points, to be the clear favourite of that demographic.

FIVEaa has poor numbers in every demographic, except the over 65s where it battles against the ABC and Cruise. 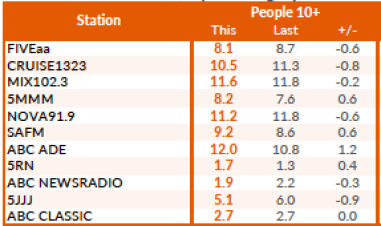