The GfK survey for January 16 – February 26, released this morning, shows the ABC breakfast show hosted by Stacey Lee and Nikolai Beilharz has 18.8 per cent of listener share – up from the 17.4 per cent recorded by Clarke in her last survey period before leaving the ABC for commercial FM station Mix at the end of 2021.

ABC political journalist Lee and former ABC regional broadcaster Beilharz were only named as Clarke’s replacements in the vital breakfast slot on January 11.

But Clarke’s high-profile return to commercial radio to head a new Mix breakfast team has proved a ratings disappointment, with listener share dropping from its previous 9.0 per cent listener share to 8.1 per cent.

Overall, the ABC’s local station stayed at number one, after trumping long-time leader Mix in the final survey of 2021. It was the first time Mix had lost top spot since 2017. 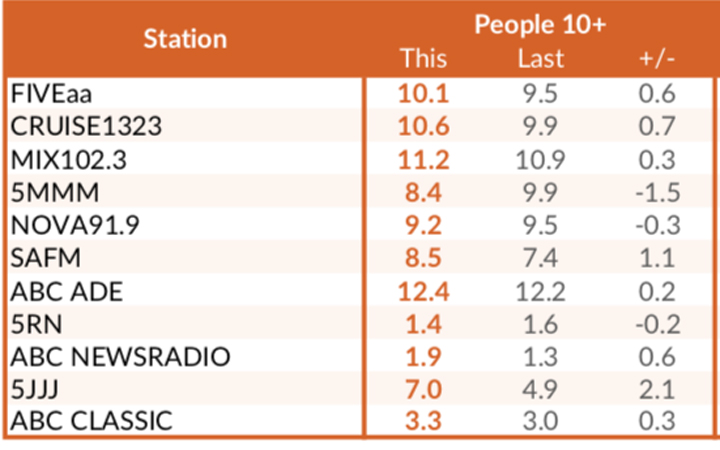 FIVEaa breakfast hosts David Penberthy and Will Goodings retained second spot but recorded a significant 2.5 per cent jump in listener share to 15.1 per cent.

Triple M came in third despite a 2.5 per cent drop in listener share to 9.8 per cent, while Nova ranked fourth with 8.8 per cent.

In Drive, ABC announcer Jules Schiller dropped from second spot to fourth while in the evenings Peter Goers increased share to retain second spot on 12.9 per cent – still a long way behind FIVEaa’s top-rating show with Matthew Pantelis, which jumped to 17.6 per cent.