In a reversal of fortunes, survey five of the GfK radio ratings shows the ABC’s local station lifting its performance from a lowly fifth in the previous survey to outright second behind perennial leader Mix 102.3.

The national broadcaster’s gains appear to have come at the expense of FIVEaa who, in the previous ratings in July, were riding high with a strong win in the breakfast survey and second place overall.

In the latest data released today it has sunk one spot to third, losing listener share in every weekday shift and weekends. Its losses in the over 55 and over 65 demographics were roughly matched by the ABC’s gains in these listener groups.

In the most closely-watched ratings battle, the ABC’s Ali Clarke has taken back the breakfast lead from FIVEaa’s David Penberthy and Will Goodings, with 16.2 per cent of listener share – an increase of 3.8 points – compared to FIVEaa’s 13.6 per cent – a fall of 1.9.

The good news for Aunty continued in the mornings shift, with ABC veteran David Bevan surging past FIVEaa’s Leon Byner to take second place, just behind Mix, with a similarly large increase of 3.6 percentage points.

The ABC also gained significant share in the afternoon and, in drive, Jules Schiller also performed strongly, adding 2.7 percentage points to hit double figures. The ABC’s Drive program had previously been one of the worst-performing local shows , but is now third behind Mix and Nova.

In the evenings, FIVEaa held on to its lead despite losing significant share, with Mix performing strongly to rocket into second place after being well back in the pack.

Overall, Mix retained its lead with a slight increase in share, despite its breakfast team of Mark Soderstrom and Erin Phillips losing ground. Strong performances in most other shifts kept the station in top spot.

Apart from FIVEaa and ABC Radio Adelaide swapping listener share, the remainder of the stations had relatively flat performances in a volatile year for radio ratings.

This survey period – May 23 to June 26, and July 11 to August 14 – covered an intense news period in South Australia, including the brief July lockdown. 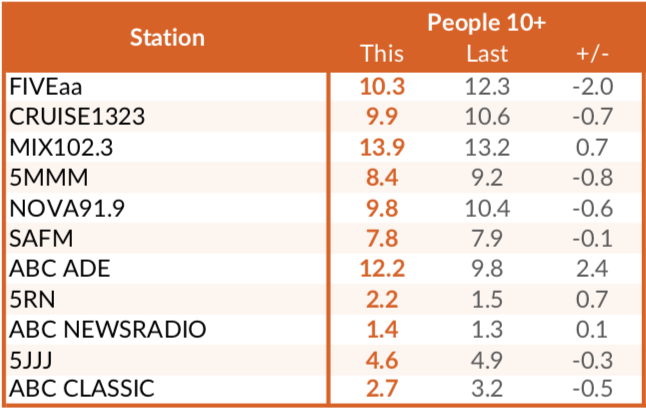