The FIVEaa pair took breakfast easily, for the first time since the survey released in September last year, with Clarke losing two percentage points of listener share and Penberthy and Goodings adding 1.7 points.

After trailing Clarke all year, Penberthy and Goodings now lead by a comfortable margin of 15.5 to 12.4. They recorded a similar figure last time they took the lead – 15.4 – but Clarke was closer, with 14.2 per cent of share.

FIVEaa performed strongly across the schedule, with Stephen Rowe in Drive adding a huge two percentage points to his share of listeners. The only loss of share for FIVEaa came in the evenings, but it still won that shift easily.

The survey, the fourth for the year, is the second in a row showing unusual volatility in Adelaide listening habits.

However, some trends have been clear all year.

FIVEaa has been steadily gaining territory – lifting overall listener share from 10 per cent to 12.3 per cent – while ABC Radio Adelaide has been heading in the other direction, sinking from 10.8 in the first survey to 9.8 in this latest set of figures.

Overall Mix 2012.3 remains in first place, with the rising FIVEaa in second. Then there’s daylight to Cruise in third, followed by Nova, which lost ground, ABC Radio Adelaide, Triple M (which lost listeners in every shift) and SAFM.

In the previous survey, FIVEaa was in fourth place, so it has effectively shifted spots with its stablemate Nova (both are owned by Nova Entertainment).

Looking across the schedule, Mix retains the lead in mornings, ahead of FIVEaa’s Leon Byner, who had a strong survey. Mix also leads comfortably in the afternoons.

In Drive, Nova was the leader followed by Mix – no other station gets close to them. FIVEaa’s Rowe bounced up to third spot – a significant leap from the previous survey when he was in fifth position. The ABC’s Jules Schiller also bounced back from poor figures to overtake Triple M, but still remains near the bottom of the table. Only the ABC’s national stations recorded lower figures than Triple M in this shift.

In the evenings, the FIVEaa line-up of Jon Blake followed by Matthew Pantelis lost some share but easily leads their nearest rival, Peter Goers on the ABC, who improved his share slightly.

Weekends were positive for FIVEaa, with the station leapfrogging three music stations – Cruise, Mix and Nova – into an unexpected first position. 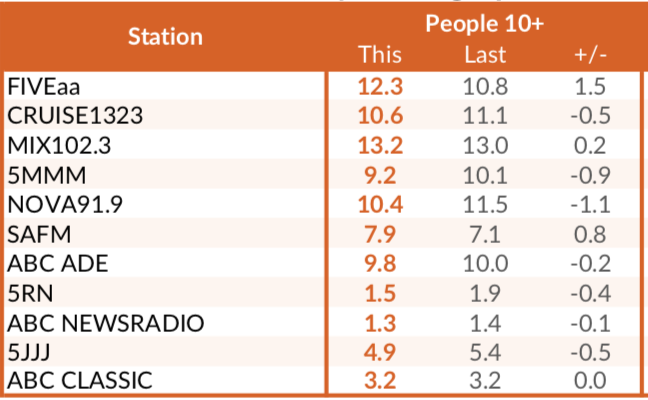