Clarke has pulled further away from her nearest rivals, FIVEaa’s David Penberthy and Will Goodings, in the second ratings survey period for the year.

Also in the breakfast shift, Mix managed to consolidate third place, increasing by 1.1 percentage points to hit 12, despite new announcing pairing, Mark Soderstrom and Erin Phillips, mysteriously disappearing from the airwaves before the survey break in March amid apparent internal upheaval.

Despite its problems, Mix maintained its overall lead in the Adelaide market and increased its share of listeners, with particularly strong performances in breakfast, mornings and afternoons.

Cruise moved into overall second place, shaking off ABC Radio Adelaide which had been level with it in survey one this year.

Nova had a strong survey, moving up from fifth to third, and opening up a commanding lead with its syndicated show in the drive shift.

ABC Radio Adelaide lost some ground to fall to fourth place, but would be pleased with increased listener share in breakfast, mornings and evenings, and the maintenance of its lead over commercial talk rival FIVEaa.

FIVEaa has slipped from fourth to fifth, dropping below 10 per cent of listener share with falls in breakfast, drive, evenings and weekends.

Despite the drop, FIVEaa’s evenings line-up of Jon Blake (7-8pm) and Matthew Pantelis (8pm-midnight), took out first place, but with a tight bunch of Mix, Nova and ABC Radio Adelaide not far behind.

FIVEaa has had a tough few months, with budget cuts hitting home and veteran presenter Jeremy Cordeaux shifting from evenings, where he was dominant, to weekend mornings, before being sacked by the station in late March over on-air comments he made about former Liberal staffer Brittany Higgins’ alleged rape in Canberra Parliament House.

Further down the list of stations, Triple M would be pleased with an overall 1.1 percentage point rise, driven by strong increases in share across most shifts, particularly afternoons and evenings. It now sits in sixth place, overtaking struggling Southern Cross Austereo stablemate SAFM. 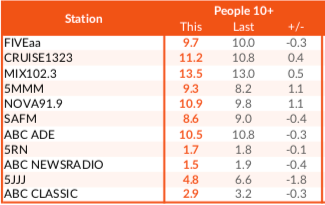