The hottest battle in Adelaide radio – between ABC Radio Adelaide’s Ali Clarke and her FIVEaa commercial rivals David Penberthy and Will Goodings – was tighter this year, compared to Clarke’s dominant performance in the final survey of 2020.

However, Clarke maintained her lead, with 15.2 per cent of listener share, down from 15.9, despite Penberthy and Goodings putting on 2.6 percentage points. They reached 14.8 per cent – closing a gap that was heading towards three percentage points at the end of last year.

The ABC remained in second place, sharing the honours with classic hits AM station Cruise, up from third place. FIVEaa came in next after a slightly improved performance overall, followed by a flatlining Nova, SAFM and Triple M, which had a terrible survey, losing 1.4 percentage points. 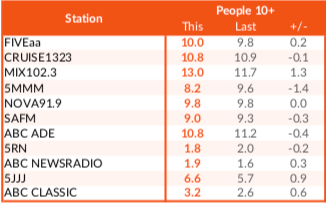 At the other end of the day, FIVEaa’s new evenings presenter, journalist Matthew Pantelis, held on to the lead established by veteran announcer Jeremy Cordeaux, who has moved to weekend breafkast, despite losing 2.4 percentage points (Jon Blake is on air for the first hour of the shift).

In mornings, Mix rocketed into a clear lead, with afternoons showing a similar trend.

A surge in Drive wasn’t enough for Mix to overtake Nova.

FIVEaa’s Stephen Rowe, taking Drive alone after the station moved on Mark Bickley, lost share in the pre-football period. The station is in fifth place.