The GfK ratings survey, taken from August 23 to September 19 and September 20 to October 24, shows Clarke taking back a decisive lead over commercial rivals David Penberthy and Will Goodings from FIVEaa.

Clarke registered a 0.6 point bump to claim 14.6 per cent of listener share, while Penberthy and Goodings lost 1.6 points to fall to 13.8.

Otherwise, it was a relatively poor survey for both talk stations, with FIVEaa losing share across every shift and the ABC also losing ground apart from Clarke’s breakfast shift and a small lift in share in afternoons.

Overall, Mix 102.3 extended its perennial lead at the top of the ratings table, with FIVEaa hanging on to second spot despite suffering the biggest overall drop in listener share of any local station. 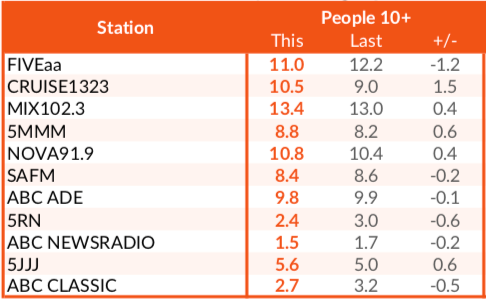 In the morning shift, FIVEaa’s Leon Byner lost his joint leadership with Mix, which opened up a narrow lead. The afternoon battle tightened but Mix again registered the highest share.

In the Evenings, FIVEaa’s Jon Blake, followed by Jeremy Cordeaux, maintained a healthy lead over all rivals despite losing share.