The GfK ratings were put on ice after survey two, released in April, with today’s new figures covering July 26 to September 19.

The figures show a bounce for perennial leader Mix 102.3 and some significant movement in some important shifts, most notably with FIVEaa taking the lead from ABC Radio Adelaide in breakfast.

FIVEaa’s breakfast team of David Penberthy and Will Goodings wrenched the lead from ABC Radio Adelaide’s Ali Clarke with a marked shift from the long-ago previous survey.

According to those numbers, Clarke was way out in front with 16.7 per cent of listener share, compared to second-placed Penberthy and Goodings, with 13.9. In today’s data, FIVEaa is on 15.4 per cent, compared to the ABC’s 14.2.

Despite the common wisdom that listeners have been turning to the national broadcaster in the midst of the pandemic, ABC Radio Adelaide lost listener share in every shift, including weekends.

Worryingly for ABC management, the ratings hit came before the unpopular move to axe the flagship 7.45am news bulletin came into effect.

Overall, Mix remains comfortably in first place, with FIVEaa in clear second place. Nova is third with the ABC Radio Adelaide in fourth.

The ABC and Cruise were the biggest losers in the drought-breaking survey, with the latter losing 2.1 percentage points in listener share.

It will be a bittersweet result for FIVEaa, with cuts hitting the station hard. A number of staff have either lost their jobs or are set to leave, most notably Drive presenter Mark Bickley whose contract will not be renewed.

He and Drive sports partner Stephen Rowe had a good survey, lifting from low in the pack to third in the competitive shift.

In other movements, mornings was a tie between FIVEaa and Mix, afternoons were easily won by Mix, while Mix also led the Drive ratings, just ahead of Nova.

In the Evenings, FIVEaa’s combination of Jon Blake from 7-8pm and Jeremy Cordeaux from 8pm to midnight, again easily won the shift, albeit with a shaved lead.

Reborn SAFM, rebadged from Hit at the beginning of the survey period, had a moderate uptick in its ratings, but still remains back in the field. Of its commercial rivals, SAFM only defeated Triple M. 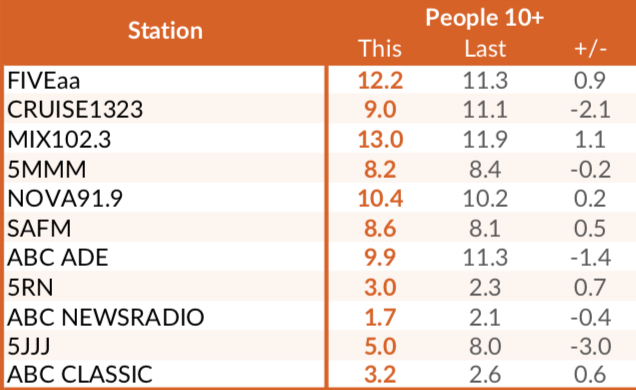