The commercial talk station’s breakfast duo of David Penberthy and Will Goodings – previous winners in the key shift – had sunk to third, but bounced back strongly with a rise of 3.4 percentage points to 13.9.

However, this powerful rise wasn’t enough to rein in Clarke, who also increased her listener share, taking an extra 1.2 percentage points to rise to 16.7 – the kind of numbers that long-term breakfast kings David Bevan and Matthew Abraham used to pull in their prime. 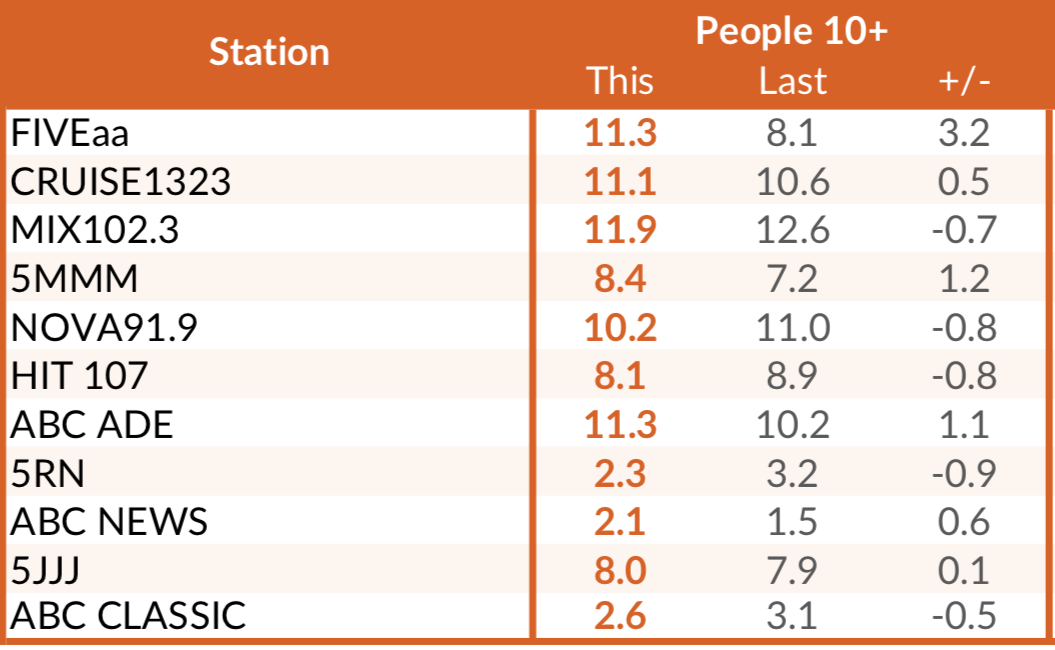 Overall, FM station Mix retained its lead, but by a trimmed margin as listeners turned to talk radio and older music formats as the COVID-19 pandemic took over the news cycle during the ratings period.

FIVEaa’s management will be relieved after the station put on a whopping 3.2 percentage points to come in at second overall alongside ABC Radio Adelaide. FIVEaa rose from a distant sixth in the first survey of 2020 while the ABC leap-frogged to second from fourth.

Cruise continues to punch above its weight, with the classic hits AM station coming in next, ahead of a sinking Nova. Triple M had a solid survey, moving up in the rankings to overtake Hit 107.

As is often the case with Adelaide radio ratings, the story can be told in the oldest demographic. After a poor first survey with the over 65 age group, FIVEaa bounced back strongly.

This shift can explain the big numbers for FIVEaa’s evening line-up of Jon Blake followed by Jeremy Cordeaux who between them added a stunning 8.2 percentage points of share to blitz the opposition with 20.9 per cent of evening listeners.

FIVEaa and ABC Radio Adelaide increased share across the schedule.

Mix retains the lead in the mornings and afternoons, but both by trimmed margins. Nova leads in Drive, again despite losing share.

Without a football season, weekends belong to Cruise.

Today’s survey will be the last full insight into radio listeners’ habits until later at least September, with Commercial Radio Australia deciding to put the next three surveys on ice due to concerns about the health and safety of the data-gathering workforce.

CRA is promising, however, to publish some “top line” data about listenership, before the ratings surveys restart.