In the final ratings survey of 2019, Mix 102.3 climbed back to the top overall after losing its long-standing ratings crown to Nova in the last survey.

But the story of the final GfK survey – taken from September 29 to December 7 – is the hotly-contested breakfast ratings battle between the public broadcaster and FIVEaa.

The ABC’s Ali Clarke has had the edge for much of the year, but her lead over commercial competitors David Penberthy and Will Goodings was reversed, with the FIVEaa pair finishing the year leading with 14.2 per cent of listener share compared to Clarke’s 12.7 per cent.

In the previous survey, the listener share was exactly the other way round.

The ABC, which recently announced there would be no change to its Adelaide line-up in 2020, lost share in all shifts. As usual in the Adelaide talk radio ratings, the change was driven by the oldest demographic. While FIVEaa increased its share of listeners aged over 65 years by 4.7 percentage points, ABC Radio Adelaide lost 3 points in this demographic.

In the morning and afternoon shifts, Mix bounced back to the top. Nova maintained its lead in drive, despite losing share. FIVEaa’s Jon Blake (7-8pm) and Jeremy Cordeaux (8pm to midnight) extended their lead in the evenings.

The ABC continued to struggle for listeners in the afternoons and drive. In the latter shift, the ABC’s Jules Schiller lost 1.1 percentage points to fall to 5.5 per cent.

The other big losers in the ratings period were rock station Triple M, which also lost share across the board.

Nova lost a similar share of listeners but still finished in second spot behind Mix which, until it fell to Nova in the last survey, had been the leader for 27 consecutive ratings periods. 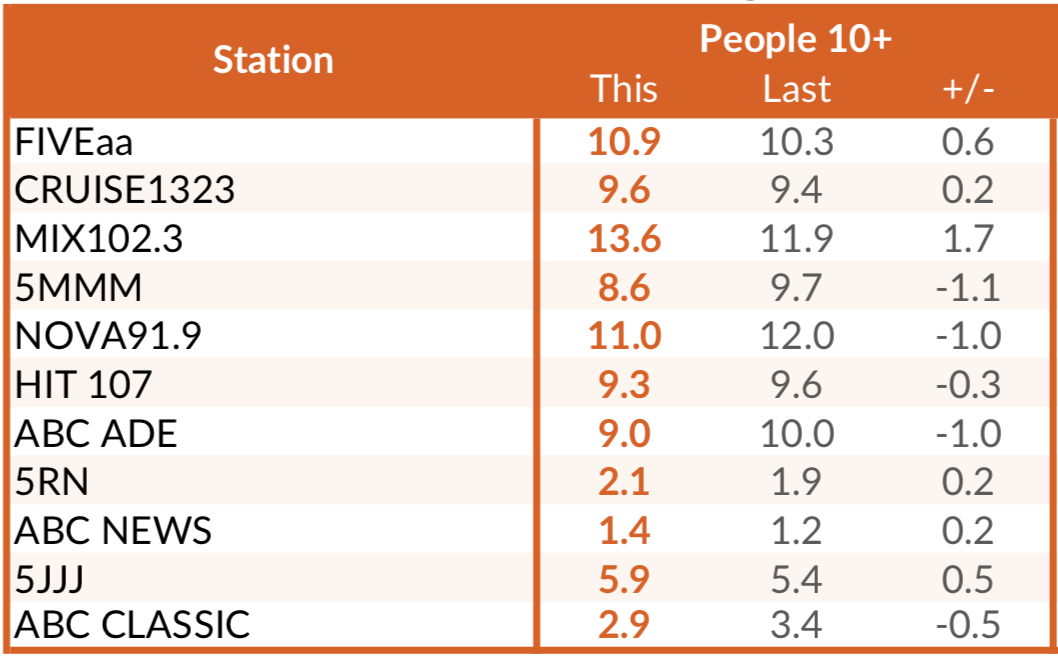