Clarke increased her share of listeners by the barest of margins, but FIVEaa’s David Penberthy and Will Goodings shed 1.7 percentage points to fall to second in the key ratings battle.

The FIVEaa pair had held the lead for one survey period before falling to second in Survey 6, taken from July 14 to September 21.

Overall, Mix 102.3 retains the lead, but its margin has been reduced with fellow FM music station Nova moving up the rankings, replacing FIVEaa in second place.

ABC Radio Adelaide overtook FIVEaa after the public broadcaster’s increase in share almost exactly mirrored the drop experienced by its AM counterpart. 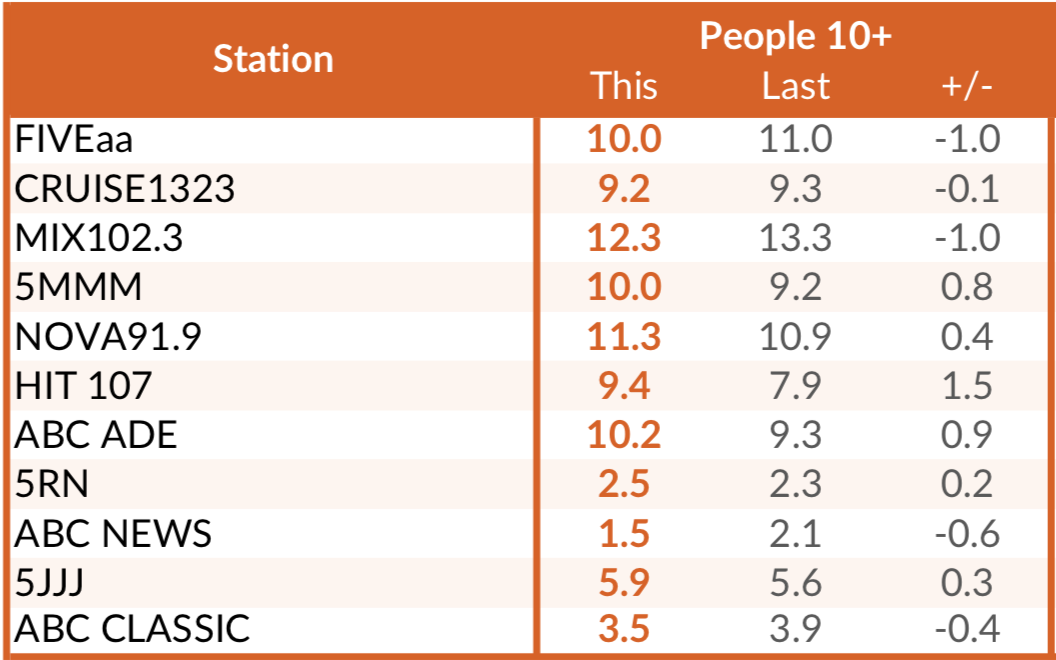 Byner also fell behind Triple M, ABC Radio Adelaide and Cruise, in what looks like an anomalous 3 percentage point dive.

Nova remains the strong leader in Drive, while the FIVEaa evenings line-up of Jon Blake followed by Jeremy Cordeaux extended their domination of night-time radio.

Nova took over the ratings lead on weekends from Mix.

Down the ratings table, hit107 would be pleased with its performance, putting on 1.5 percentage points thanks to stronger performances across the board, excluding evenings.

Triple M also had a solid survey and now sits in equal fourth position with FIVEaa.

As always, the demographics told the story for Adelaide’s talk stations. ABC Radio Adelaide took back the lead from FIVEaa in both the 55-64 and over 65 age segments, which drove its move up the leaderboard.