The third ratings survey of the year saw the lead of perennial number one, Mix 102.3, shaved while both ABC Radio Adelaide and FIVEaa moved up the leaders’ board.

Clarke maintained her position as Adelaide’s favourite breakfast announcer, rising by 0.8 percentage points to hit 15.5 per cent of listener share. FIVEaa’s David Penberthy and Will Goodings bounced back strongly to take second spot in the shift from Mix’s Jody Oddie and Mark Soderstrom, who lost share.

The rise of the talk stations in the survey coincided with the campaign leading up to the May 18 election, and the week following.

Overall, Mix maintained its lead, despite losing share across the schedule.

The biggest improver was FIVEaa, lifting to overall third position from sixth after a disappointing survey two. Nova was next in line, with its listener share flatlining.

The heating up of the AFL season may also have helped FIVEaa, with its drive sports programming improving its share, along with weekends. However, the same impact didn’t help FM music and football station Triple M, which improved it share on weekends but overall lost ground. 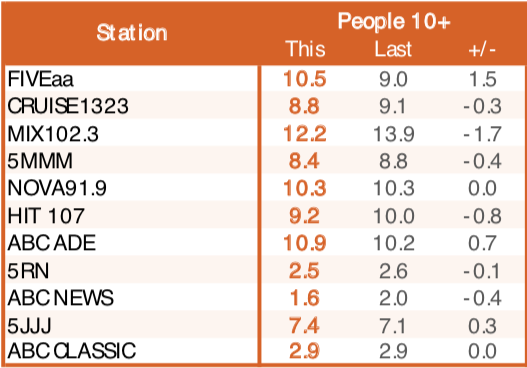 Mix remained the leader in mornings and afternoons, despite losing share. The ABC’s David Bevan, followed by the syndicated Conversations program, is second in mornings, just ahead of FIVEaa’s Leon Byner: both programs improved their share.

Nova remained the leader in drive.

Mix holds a slim lead on the weekends.