The ABC’s soft start to the ratings year was matched by fellow talk station FIVEaa: its breakfast team of David Penberthy and Will Goodings dropped from second spot to third. They lost 1 percentage point of share. The ABC’s Clarke also lost a similar portion of listener share, while Mix increased by 0.5 points.

Below these top three, there’s a tight bunch of stations led by Nova and followed by a surging new team at Hit of Andrew “Cosi” Costello and Rebecca Morse, and Triple M.

Overall, Mix leads the ratings with 13.3 per cent of listener share, following by Nova. While the leaders are unchanged from last year, hit107 has replaced Cruise in third spot, followed by Triple M and ABC Radio Adelaide in equal fourth. FIVEaa has dropped from fourth to sixth, while Cruise plummeted from third to seventh.

In the mornings shift, Mix extended its lead, while Cruise and FIVEaa lost share. It was a similar story in afternoons, with Mix surging and Cruise, ABC Radio Adelaide and FIVEaa dropping (the latter fell to a very low 5.4 per cent).

In drive, Nova remains the leader despite losing share, followed by Mix. ABC youth station had a particularly good drive performance, overtaking Cruise and remaining ahead of FIVEaa, and its older-oriented sister station, ABC Radio Adelaide. In the battle of the Drive sports shows, Triple M overtook FIVEaa.

Evenings saw FIVEaa remain on top without a change to its ratings share, followed by Nova and then a falling ABC Radio Adelaide.

The demographic data shows a solid increase for Mix in the 25-39 year-old age group, with all of its commercial rivals losing ground.

There is some unexpected movement in the demographic figures behind Nova’s increase: while the music station had strong gains in the younger demographics where it now dominates, it also scored a 4.8 percentage point increase among those aged 40-54.

Hit, definitely aimed at a younger listener, picked up share in the 40-54 year-old group. Nova, Hit, Cruise and Triple J now attract a higher proportion of this age group than FIVEaa, which lost about half of its share in this demographic.

ABC Radio Adelaide, which competes with FIVEaa for the talk radio audience, also lost ground among the 40-54 year-olds to fall behind its sister station Triple J. 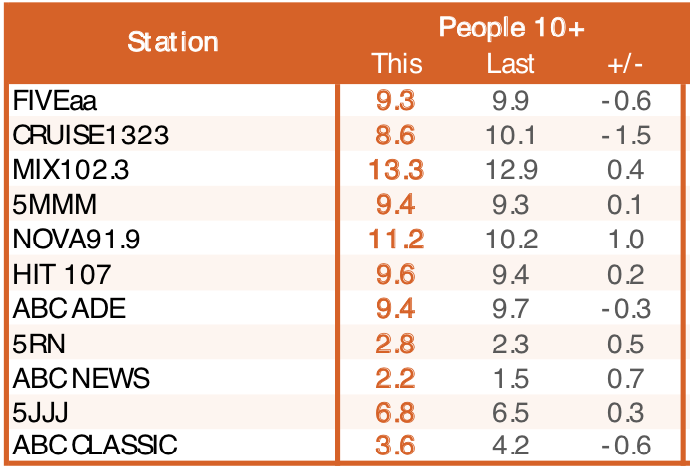