The GfK ratings survey, covering October 1 to December 9, reveals significant losses in audience share for the ABC across every shift, with listeners moving up the AM band to low-profile classic hits station Cruise 1323.

In breakfast, the ABC’s Ali Clarke lost two percentage points to give up the crown to FIVEaa’s David Penberthy and Will Goodings, who achieved a strong victory with a 2.3 percentage point surge.

The news was even worse for the ABC in evenings, where veteran Peter Goers lost 2.2 percentage points to finish the year more than 10 points behind talk rivals FIVEaa.

It’s been a year of transition at ABC Radio Adelaide with changes in three of the five locally-produced week-day shifts. Jules Schiller took over drive early in the year and Ali Clarke moved to breakfast from mornings mid-year. Long-term breakfast leaders Matthew Abraham and David Bevan ended their on-air partnership, with Abraham leaving radio and Bevan taking over Clarke’s mornings shift.

The moves in breakfast and mornings worked initially, with Bevan consolidating listener share and Clarke holding the ABC’s lead in breakfast.

That has changed in this survey, although Clarke remains in a solid second place. The ABC will be hoping for a repeat of several years ago, when FIVEaa breakfast took the lead late in the year, only to relinquish top spot in the following surveys. 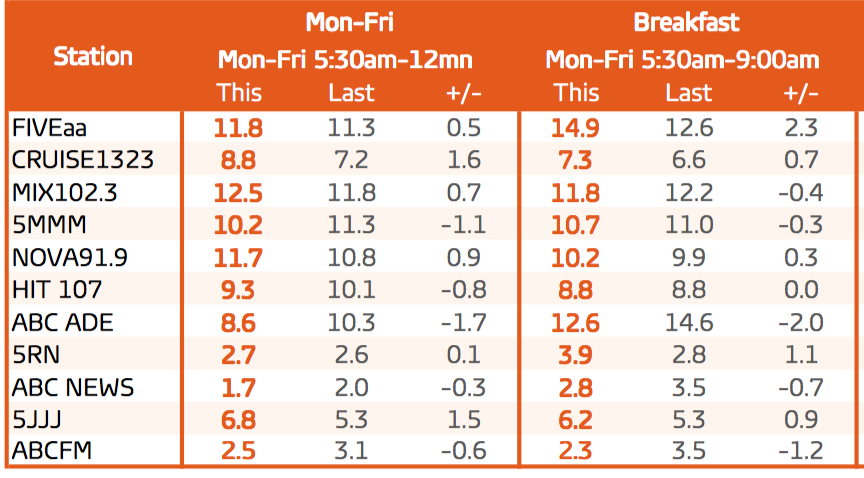 However, warning signs are gathering for the ABC. Compared to the same period last year, ABC Radio Adelaide has lost more than three percentage points in listener share – a huge movement in a relatively static market.

The key problem for the ABC in this survey is among the oldest listeners – it lost a whopping 6.8 percentage points of share among listeners aged over 65, with most of those moving to Cruise (up four points) and FIVEaa (up 1.9 points).

That demographic development could cause some discomfort for the ABC’s interstate radio managers, who recently announced they would be shaving time from the locally-produced afternoon shift to fit in a nationally-syndicated program hosted by Myf Warhurst and designed to attract younger listeners.

Overall, Mix102.3 finished the year on top, closely followed by Nova which had a strong back half to the year, and FIVEaa in third place.

The ABC’s local talk station now only outrates its ABC stablemates – a big fall from 12 months ago when it was a clear second to Mix. 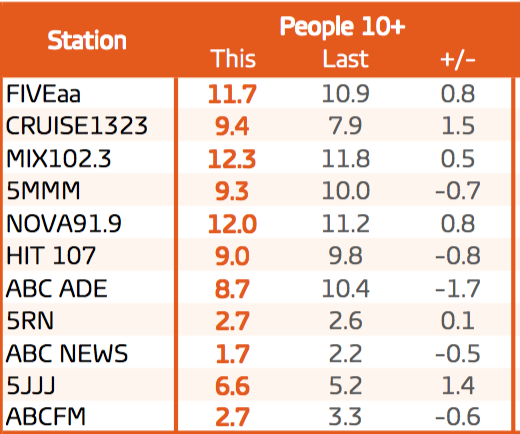