Regular InDaily readers will be aware that the Rann-era Thinkers in Residence program has been rebooted by the Dunstan Foundation, without State Government funding.

The project is focusing on the social economy – the place where “doing good” and making money intersect. And the latest thinker on the topic, Texan Suzi Sosa, is coming to Adelaide next week to talk about social entrepreneurship.

While Sosa has a significant reputation as an entrepreneur through her company Verb, she has also recently added another post to her CV.

She is the chairperson of one of the world’s most interesting experiments in journalism – the Texas Tribune.

The Tribune employs nearly 50 staff and covers only serious matters of public policy – and all without advertising or paywalls.

The non-partisan, non-profit news website survives solely on the support of members and benefactors. This might sound an unlikely business model, but the Tribune’s influence and output has grown quickly since it was launched in 2009.

Sosa told InDaily the business model had been proven, with the Tribune thriving to become a $7 million enterprise.

She classes the endeavour as a “social enterprise” – part of the group of organisations that can help to solve public problems.

“The media is a very important arm of our society and how we deal with these problems,” she said.

“We have definitely seen in the US the implosion of journalism and unbiased news.

“The media is another sector where social innovation is desperately needed.”

The Tribune’s readership has grown exponentially, without clickbait and trivia.

“How do we package what we have learned in a way that we can share more formally?

“I think that’s one of the more interesting points about social entrepreneurship – it puts a lot more pressure on leaders to make empirical decisions.”

Would it work in Australia? We don’t have the culture of philanthropy – nor the money – of a state like Texas, but I do think a section of the community has a growing appetite for non-partisan, public good journalism.

Women in Media South Australia is tackling trolls in its next event, to be held in the city on Wednesday night (July 5).

The group, formed by the journalists’ union, the MEAA, conducted a survey last year which found 41 per cent of women employed in-house as journalists had experienced online trolling.

For details and to book, go here.

The Conservatives in Britain seem a little less relaxed about giving Rupert Murdoch what he wants than their counterparts in Australia.

As this column has reported previously, the Federal Government’s moves to abolish the so-called two-out-of-three rule would open the door for Murdoch’s News Corp to add an Adelaide television station and radio network to its local stable which currently includes The Advertiser, Sunday Mail, The Australian and The Messenger newspapers. Murdoch also controls the Australian pay TV channel Foxtel.

Over in the UK where Murdoch also owns a plethora of media properties, the Australian-born mogul is attempting to take over European pay-TV group Sky.

Unlike the Coalition Government in Australia, which is transparently keen to do Murdoch’s bidding, the Tories are at least making the media giant jump through some hoops.

Reuters reports today that Media Secretary Karen Bradley says she is persuaded that Twenty-First Century Fox’s bid for Sky could give the Murdoch family excessive influence over the media, after regulator Ofcom assessed the impact of the deal.

“The proposed entity would have the third largest total reach of any news provider – lower only than the BBC and ITN – and would, uniquely, span news coverage on television, radio, in newspapers and online,” Bradley said.

She will make a final decision on July 14, giving Fox two weeks to address her concerns. Not everyone is convinced she will be able to resist.

Back in Australia, a former Murdoch general manager in Australia, John Menadue, has warned the Government not to let Murdoch extend his power over the Australian media.

In a scathing interview with the ABC in Melbourne, Menadue said Murdoch was “the great rent seeker” and was using his considerable influence to change media laws in Australia.

“He is now seeking in the UK amendments to complete his $20bn takeover of Sky TV,” he said. “It’s interesting to me that his papers in Australia and elsewhere are always attacking what they call welfare bludgers and single mothers yet he uses governments more than anyone else I’ve ever known.”

Veteran broadcaster and journalist Matthew Abraham was given an emotional farewell from ABC Radio Adelaide this morning, after announcing his sudden retirement a week ago.

Abraham, who has been partnered with David Bevan for more than 15 years, helped build the breakfast program into the most influential radio force in Adelaide and, regularly, one of the highest-rating ABC radio programs in Australia.

Along the way, he made friends and enemies in equal share – as any serious journalist should – with his uncompromising and combative interview style.

Premier Jay Weatherill, appearing on the program this week, had this to say: “We have to prepare ourselves – it’s the toughest gig in town.”

Perhaps the best summation came from listener Trish, from Port Pirie, who called in to recount her feelings when she heard about Abraham’s radio retirement: “I was yelling at the radio for Matthew to shut up – then I heard the news and I burst into tears.”

The “Exclusive” tag is over-used in modern journalism and, as a result, is losing its power as a marketing tool for reporters’ valuable work.

Below is the front page of the Murray Pioneer last week. 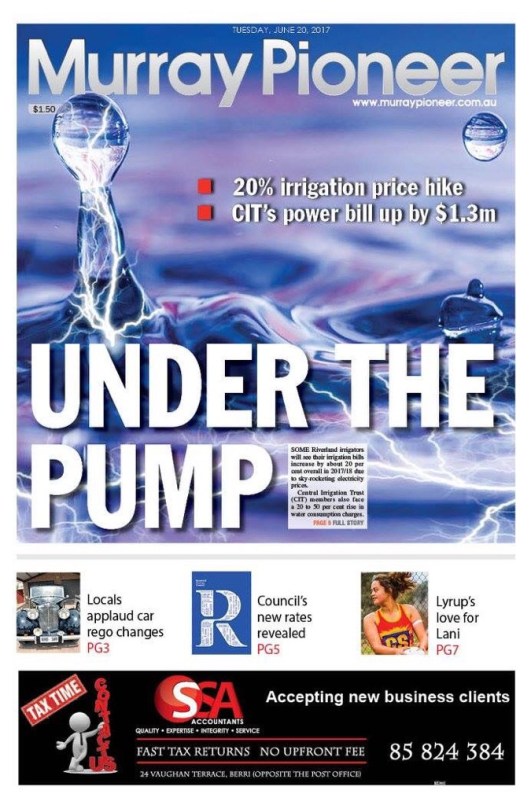 And, a week later, here’s a front page of The Advertiser. 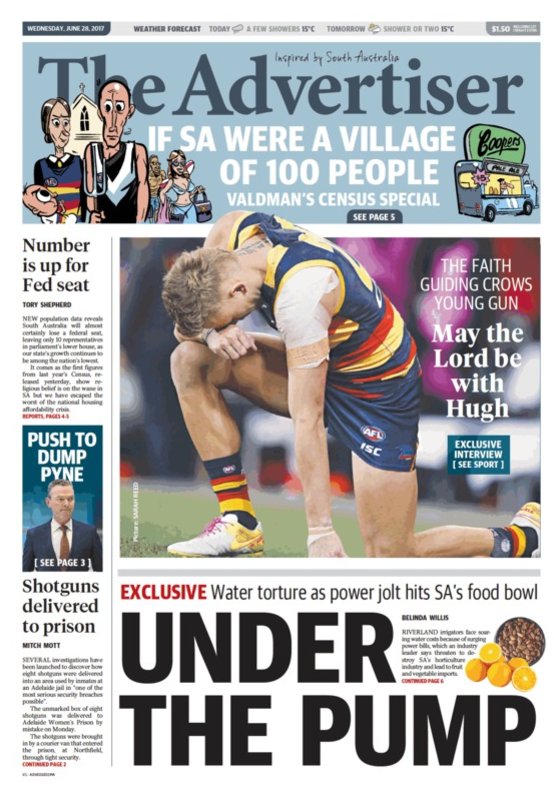 I’m not criticising the work of the journalist – it’s a legitimate and important report and adds more detail to the picture, but the nub of the story is essentially the same.

Media Week is a regular column about the South Australian media, marketing and public relations industries.