What happens to marketing when machines do our shopping?

Gurney, speaking at the InDaily/Mumbrella Digital Futures event at the Hilton Adelaide, says AI technology is developing fast – so fast, in fact, that he predicts “Virtual Personal Assistants”, or VPAs, will be commonplace by 2020.

These AI entities, which he describes as like the iPhone’s ‘Siri’ “times 1000”, will quickly become addictive, interacting with internet-connected devices around the home to manage many of our mundane tasks, including purchasing decisions.

By 2020, Gurney says VPAs will be transforming retail and marketing. Humans will start to outsource “lower tension’ decisions to their VPA. A VPA will, for example, be able to “talk” to our fridge or washing machine, so it will know when to place an order for more milk or laundry detergent.

At first, we will be offered purchase choices and either say yes or no, but that will soon change.

“We will get to the point where I no longer have to say ‘yes’ – the VPA will make pre-emptive decisions based on what it knows I like,” Gurney says.

“This has huge implications for the world that I’m from – marketing and advertising.”

By 2023, that will change. In this year, Gurney predicts, VPAs will being to make pre-emptive decisions on behalf of their owners and that will be the game-changer for advertising.

“We will trust them as well,” he says. “By this point we will be so used to it and addicted we will let them do it.

“We’re really going to see the rise of VPAs making purchase decisions. That then changes the whole notion of marketing and advertising. So marketers will start to shift from influencing the pre-frontal cortex to actually start to influence machines. Marketing, fundamentally, starts to become a way to influence machines.” 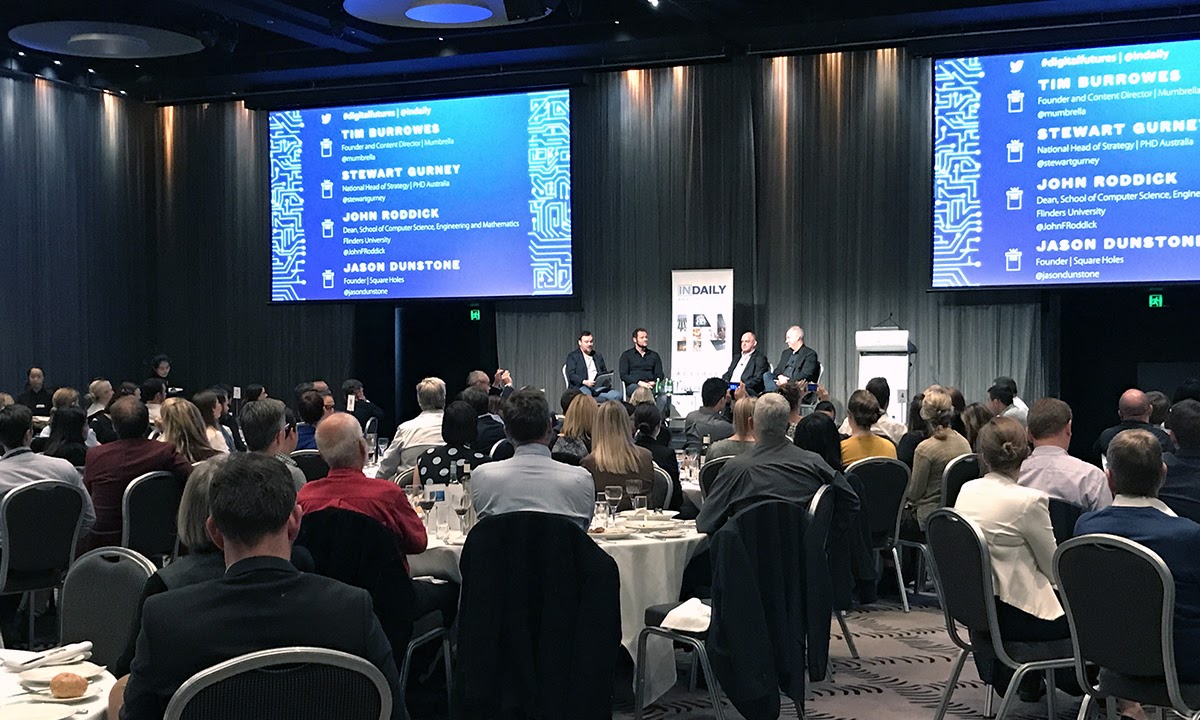 The opportunities for marketers is obvious, but there are also clear implications for ethics and privacy.

But wait, there’s more to come, and sooner than you might think, says Gurney.

By 2029, he says, these VPAs will develop “human levels of intelligence”.

For those who are now completely freaked out, there might be one sticking point to this brave new world, at least in Australia.

A panel member at yesterday’s discussion which followed Gurney’s presentation, John Roddick, the dean of the school of computer science, engineering and mathematics at Flinders University, says Gurney’s timeframes are credible.

However, he says some technical issues might hold back the AI tide.

“The other thing that really might slow us up is the NBN,” he noted, to rueful mirth from the crowd.

Radio Adelaide has launched a comic book-style re-brand and a new slogan after it settled with the Australian Broadcasting Corporation, allowing the national broadcaster to change the name of its local station to “ABC Radio Adelaide”.

The independent radio station, which was granted a temporary injunction against the ABC’s name change last year but agreed to an out-of-court settlement in March, has overhauled its branding.

A new logo, tagged with the slogan “Rich & Real”, deliberately distances the Radio Adelaide brand from the ABC’s local station.

The station has revamped its line-up over the past six months, including slotting in a midday sports show with veteran broadcaster Ken “KG” Cunningham and local basketball legend Phil Smyth.

The two stations’ logos side by side.

The former staffer to disgraced president Richard Nixon ran Fox News from its launch in 1996 until last year when he stepped down as a result of sexual harassment allegations.

Despite his “fair and balanced” catch-cry for Fox, the channel was widely considered the news service of choice for conservatives, and has also been credited with aiding the political rise of Donald Trump.

A ratings winner, Fox became very influential in US politics over the past two decades. Its robust approach has become a template for ideologically-skewed news reporting which, sadly in your columnist’s view, is now all too common.

“A brilliant broadcaster, Roger played a huge role in shaping America’s media over the last thirty years. He will be remembered by the many people on both sides of the camera that he discovered, nurtured and promoted. Roger and I shared a big idea which he executed in a way no one else could have. In addition, Roger was a great patriot who never ceased fighting for his beliefs.”

A media lawyer and a leading expert on Freedom of Information have been awarded the Australian Press Council’s 2017 Press Freedom Medals.

The medals, which can be awarded to anyone who works to preserve free speech, press freedom and open and transparent government, went to News Corp Australia’s national editorial counsel, Michael Cameron, and the leader of the Australian Open Government Partnership Network, Peter Timmins.

Cameron, a former journalist, leads News Corp’s in-house legal team, whose members go into battle on suppression orders, injunctions, defamation actions, and other cases which impinge on the media’s attempts to report openly and fearlessly.

“This year’s winners have been exemplary in their tireless pursuit of the critical principle that citizens have a right to know, and so governments, and other important public and private institutions, must operate in an open and transparent manner,” said Press Council chair Professor David Weisbrot.

Media Week is a regular column reporting on the media and marketing in South Australia, the nation and the world.