The recently relocated Radio Adelaide is threatening legal action against ABC891 over its plans to rebrand itself as “ABC Radio Adelaide”, with chairman Iain Evans confirming he has sent a ‘cease and desist’ letter to the national broadcaster.

It comes amid a broader shakeup of the local radio scene.

After four years with Triple M, Jon Blake will return to FIVEaa, where he was once part of a successful breakfast line-up.

InDaily understands that Blake, a radio veteran who specialises in comedy impressions, will host an evening show as well as contribute to FIVEaa breakfast.

“He’s had great success and been at his best with our team,” the station said. “We wish him all the best in his new nights show on the AM band.”

FIVEaa did not respond to InDaily’s request for a comment, but the station later Tweeted confirmation of Blake’s return.

Just confirmed on air by Jeremy Cordeaux — Jon Blake will be back on FIVEaa in 2017! pic.twitter.com/uuzKEd1Opn

Meanwhile, changes are afoot at the 891 ABC Adelaide with a new name causing consternation, and veteran presenter Ian Henschke announcing last night that he would retire this month after a 34-year career at the ABC.

ABC management announced today that all of its local stations would be renamed after their geographic location.

In line with the change, 891 will be rebranded “ABC Radio Adelaide” from January 9 next year – remarkably similar to the South Australian community station, Radio Adelaide, which operates on the FM band.

The change has already prompted resistance from Radio Adelaide, which fired off a legal letter to the national broadcaster today warning it against using the phrase “Radio Adelaide” in its branding.

“This is a David and Goliath battle. My message to the ABC is ‘get stuffed’.”

He promised to take every measure available to protect the community station’s name.

“There has been no consultation or communication with Radio Adelaide from the ABC, prior to us finding out just minutes before it was announced today in the media.

“Radio Adelaide has been in existence for 43 years and is Australia’s first and oldest community radio station.

“It is simply unbelievable that the ABC with all its media resources were aware that the name Radio Adelaide was already being used by a radio station and decided to hijack our name anyway.

“It is breathtakingly arrogant of the ABC – a taxpayer funded monolith based in Sydney – to decide to take on a primarily volunteer run community radio station in Adelaide.”

In a statement announcing the change, the ABC’s Director of Radio, Michael Mason, said the “new visual and aural identity” would be consistent for all of its stations.

“It’s important to make a coordinated approach to our visual and aural identity in a transforming radio world where audiences can access content whenever and wherever they desire,” Mason said.

“This update will ensure a consistent and positive experience for audiences. It will strengthen ABC Radio’s position at the heart of our capital cities, delivering topical, intelligent, and relevant content about the issues that matter to Australians.”

It’s the fourth rebranding of the ABC’s Adelaide station in its history.

The station began in 1924 as a privately-owned station called 5CL before being taken over by the ABC a few years later. It was known as 5AN until 2000 when it adopted the 891 ABC Adelaide moniker. 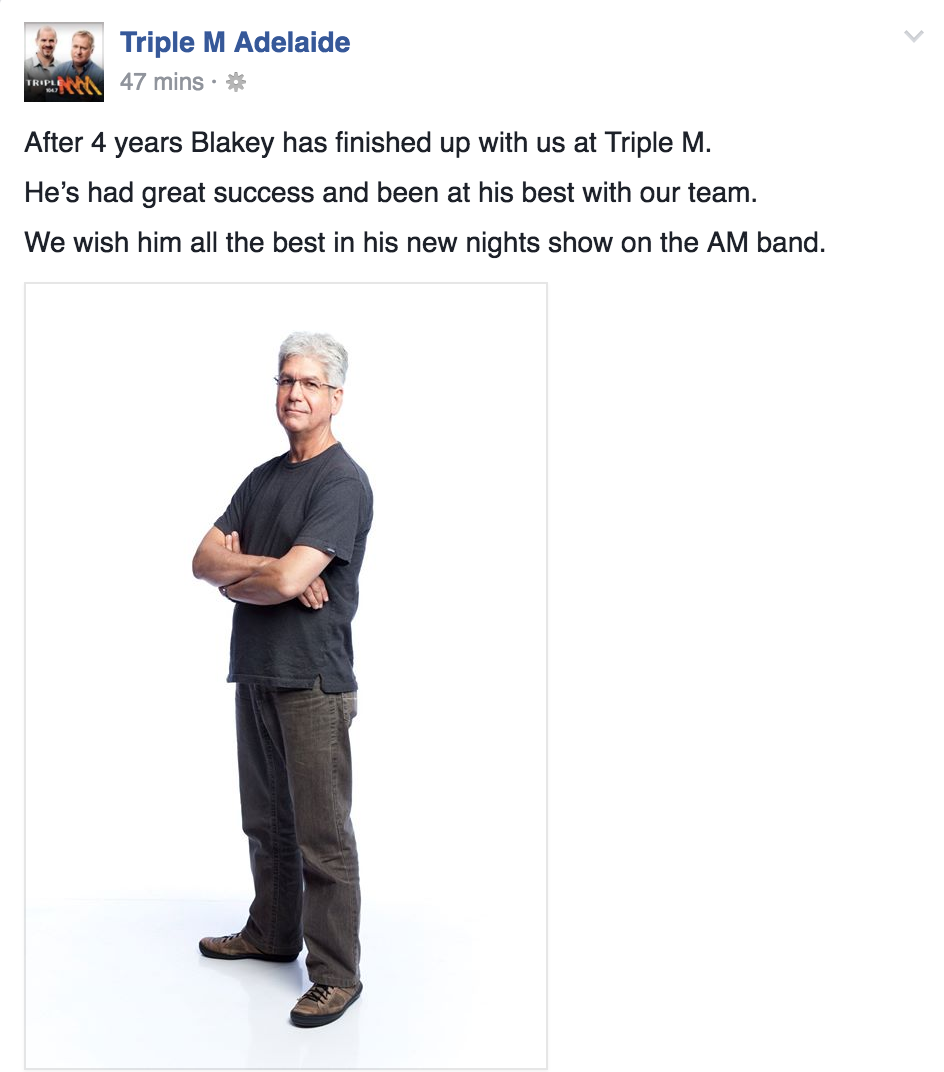 Henschke, who has been part of the 891 line-up since 2011, will finish up on December 9 with a replacement to be named early next year.

He replaced Michael Smyth in the shift this year after spending five years in the morning slot. Smyth had held down Drive for four years before his contract was ended, much to his disappointment.

Henschke joined the ABC’s Brisbane office in 1983 as a trainee education officer, before working across a wide range of the national broadcaster’s TV and radio programs including stints on Behind the News, Landline, Countrywide, 7.30 Report, Four Corners, Australia Network and Stateline.

“I started at the Film and TV School in the Sound Workshop in 1980 and had the privilege of being trained by ABC greats like Robert Peach, the founder of AM and PM, and legendary late night announcer Arch McKirdy,” Henschke said.

“This training helped me get a job with what was then the Australian Broadcasting Commission. I went on to work in TV in many different areas before coming ‘home’ to radio again in 2011.

“I thank the ABC for a wonderful career. It began when we used film, audio tape and typewriters and finished in the era of silicon chips, satellites and smartphones. I’ve had a host of extraordinary opportunities, including working on an ABC/AusAid project in Cambodia, studying at Oxford, covering the 1997 Hong Kong Handover, reporting for Four Corners and BBC World, being a staff-elected Director on the ABC Board, hosting Stateline and of course being part of a number one radio station renowned for community engagement.”

He says along with spending more time with his  young daughters, he plans to write, teach and do some advocacy work in the not-for-profit sector.