As Communications Minister in the Abbott Government, current Prime Minister Malcolm Turnbull made the decision to kick community television off the airwaves to “free up” the licences for other uses.

In Adelaide, this means Channel 44 will be off the air from the end of the year – off the public airwaves, anyway.

The station will survive and, the new management hopes, prosper in a new world of on-demand streaming.

It has developed an app and online platform which will allow viewers to watch content whenever or wherever they like.

New general manager Lauren Hillman, who had a long career in TV production at the ABC before Mark Scott axed Adelaide’s studio, is counting on fresh programming, new digs in the ABC building, and the new online platform to build a new audience for Channel 44.

The online solution and related app have been built by Hostworks, which hosts and manages the data behind the ABC’s popular and successful iView streaming player. Both will be up and running in the coming weeks.

Hillman told Media Week most of the station’s existing content would be available via the new platform, and it was also working on fresh programs.

These will include interviews with Cabaret Festival performers (filmed in a car around Adelaide but definitely not a rip-off of Car Pool Karaoke!), content from the SALA Festival, and broadcasting of local sport (watch this space).

For political types, the station is also launching a weekly election-focused game show, called The Raucous Caucus, to be filmed at the Rhino Room through June. It will have a Spicks and Specks-type format, with two teams competing and bouncing off the key events in the campaign.

“The future for us is all about local content,” Hillman says. “We have a new management team, new volunteers and we’re establishing a new studio with the latest in professional broadcast technology located in our new home within the ABC building at Collinswood.”

She said The Raucous Caucus was the first of the new local programs, and would launch on Thursday, June 2.

“Created specifically for the 2016 federal election campaign, The Raucous Caucus puts a uniquely South Australian spin on the cut-and-thrust of the biggest issues facing the electorate,” she said.

“There’s some serious talent behind this show. Among our production team are veteran stand-up comedians who’ve toured the world, writers with credits that include Shaun Micallef’s Mad As Hell and The Weekly, and the best and brightest of Adelaide’s emerging comedians. Think of it like Spicks and Specks, but for politics.

“A broad range of guests will be invited to be part of the weekly show, with varying professions – from journalists to politicians, angry bloggers to respected opinion shapers.”

South Australia’s Public Trustee has injected some unexpected humour into a campaign encouraging people to make a will.

The campaign has been developed with agency Cummins&Partners SA and encourages people to be “Good to Go” by preparing a will.

“Research tells us that one of the strongest benefits of finalising a will is peace-of-mind,” says Public Trustee Debra Contala. “It’s that feeling of relief you get knowing that every aspect of your estate has been accounted for and will eventually be taken care of for you.”

Cummins&Partners SA creative director Jason Hollamby argues that people who have made a will “express a heightened sense of being able to get on with life, no matter what happens next. This is exactly the sentiment we’re looking to express in this new campaign.”

“Death can be confronting, which means almost 40 per cent of Australians die without having a will,” he says. “This can put a lot of stress on loved ones. By taking a more humorous and positive approach we’re hoping to change people’s avoidance behaviours.” 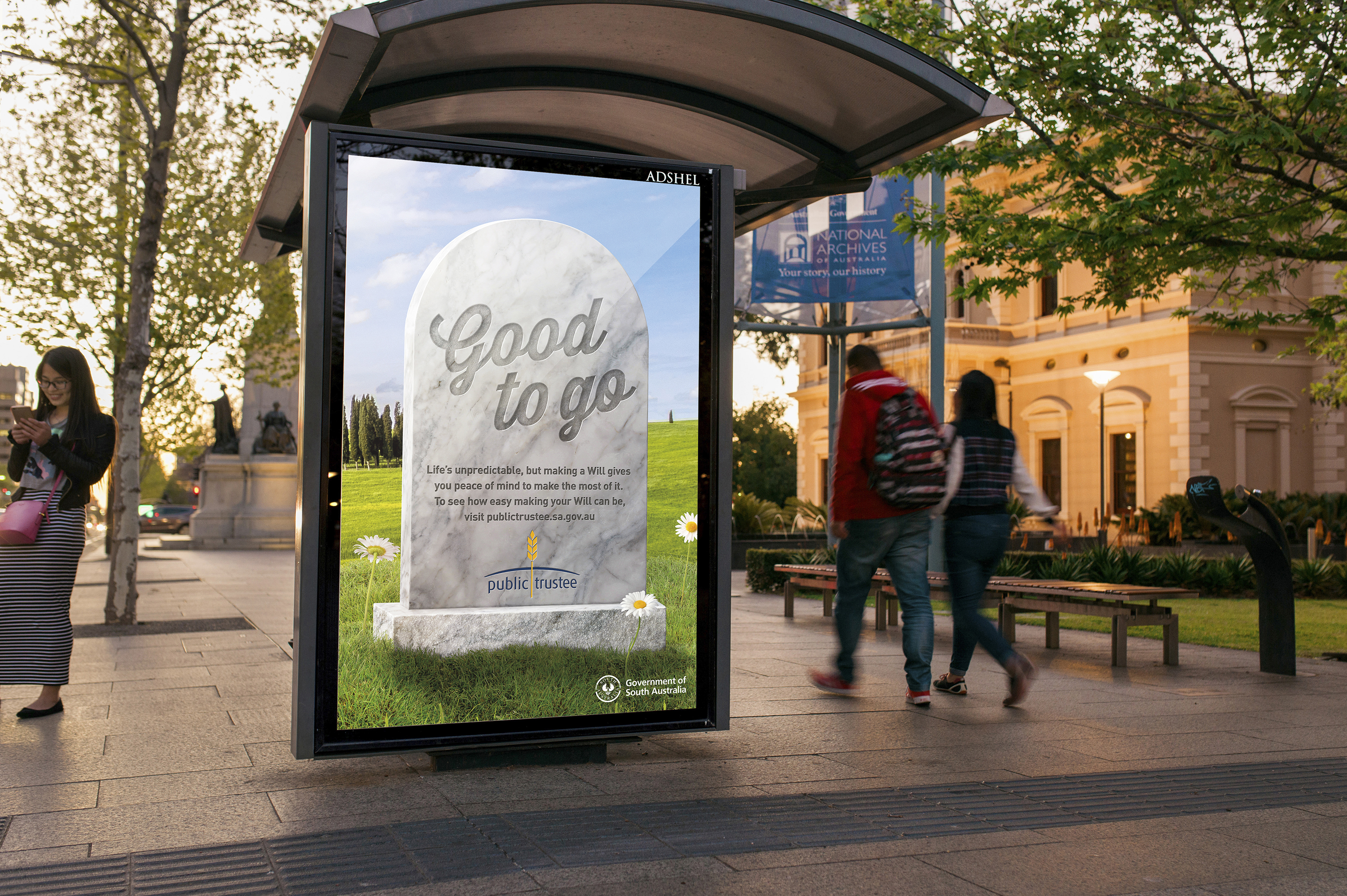 Remember when newspapers had influence?

The anti-immigration genie is out of the bottle in this federal election campaign and it seems nothing can stop it.

There was a time in Australian politics – albeit a brief time between the end of the White Australia policy and the advent of Pauline Hanson – when the major parties, by and large, avoided exploiting anti-immigration sentiment for political gain.

The kind of political gambit we’ve seen from Peter Dutton this week – in which he warned about the costs of “illiterate” and “innumerate” refugees to the Australian community – once would have earned the ire of the likes of The Australian. Times have changed, with key moments including the Tampa crisis, Labor’s flip-flopping over strategy, and Tony Abbott’s simple but effective “stop the boats” mantra.

But back in 1990, Liberal leader Andrew Peacock was dealt what was believed to be a devastating blow by The Australian’s Paul Kelly (who’s still on board Rupert’s flagship paper), for a much gentler jibe at immigrants.

In the lead-up to election day, Peacock, trying to dislodge formidable PM Bob Hawke, expressed fears that the MFP concept (yes, that one) would lead to an Asian “enclave” being established in Australia.

In a front-page takedown under the heading, “Peacock: A Danger in The Lodge”, Kelly wrote: “Mr Peacock has stooped to exploit immigration fears and anti Japanese sentiment in a way which suggests that Australia’s national interests are best preserved by keeping Mr Peacock in opposition.”

A furious Peacock later confronted Kelly at the National Press Club, threatening: “I’ll get you after the election. I’ll deal with you in another forum, you bastard, because I don’t deal with cowards.”

In a piece in The Fifth Estate, published 12 years ago by RMIT Journalism, veteran journalist Max Suich noted that it’s hard to believe now that a comment piece in a newspaper on this issue could have damaged a leader’s campaign.

“The curious fact is that as opinion becomes both noisier and ubiquitous its influence declines,” he said.

You can read Suich’s analysis here – it still holds up.

The Advertiser’s campaign about Adelaide’s burst water mains continues, this time with a cardboard cut-out of water minister Ian Hunter being schlepped around to incidents. As we reported last week, the number of breaks this year isn’t remarkable compared to previous years.

It’s a stunt, of course, but to what end beyond embarrassing Hunter? Of course, the minister would be wasting his time if he visited each of the 3000-4000 breaks that happen in the system each year. His time would be better used working out how to improve SA Water’s response times, and assessing the balance between spending on repairs and upgrading infrastructure.

Pity the NSW water minister if the local tabloid decides to go down a similar route. Sydney Water publishes a real-time map of breaks, leaks and other incidents in the system. Below is a screenshot of just a section of metropolitan Sydney this morning. 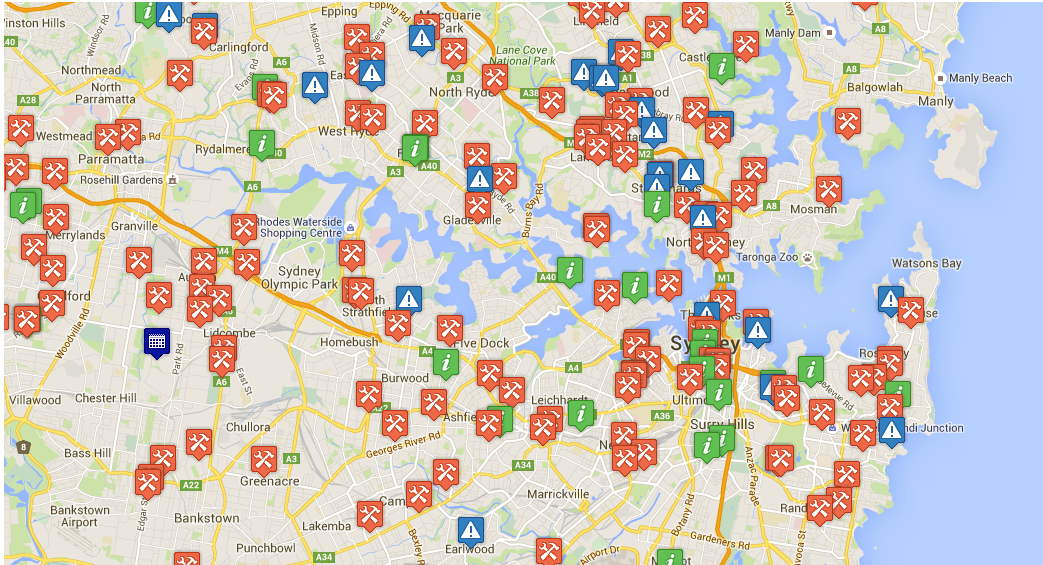 Last year’s news that the National Geographic Society would be taken over completely by the Murdoch media empire attracted widespread concern, and some outrage. But the story is much more fine-grained than has been presented, as this excellent long read from Bloomberg shows. It examines forensically how it happened, why the Society agreed, and how the different personalities of the Murdoch family impacted on it.