What started as a trickle has turned into a flood of news stories about burst water mains popping all over the city.

But what’s the truth? Is there a particular systemic problem? Are things getting worse?

The statistics show that, in terms of bursts, SA Water is actually performing better, over time, than many other Australian water utilities – and SA Water has distributed a Bureau of Meteorology report to prove this point.

The Tiser, understandably, today got stuck into Water Minister Ian Hunter (he hasn’t handled the situation well,) writing that the same BOM report shows that SA Water performs badly in other areas – including the worst performance for time taken to fix failures, and a very poor performance with sewer breaks.

However, the picture is more complicated. Unlike many other utilities, SA Water looks after the entire state, which obviously affects the time taken to fix problems. The same report also shows that SA Water is one of the least complained about water utilities in Australia, and it’s also not the most expensive (in terms of typical residential bill) – by a fair way.

Clearly SA Water isn’t the best-performing utility in Australia – but it’s not the worst.

Aside from all that, the most pertinent stat in the current debate isn’t contained in the BOM report – and that is whether this year is proving to be much worse for burst water mains than previous years.

If you include regional South Australia, SA Water is having a better year than 2015.

The stats on bursts – which don’t show the size or extent of the pipe failures – are below.

The other salient fact is that this time of the year is a common period for an increase in burst water mains, due to variability in temperature and rainfall. 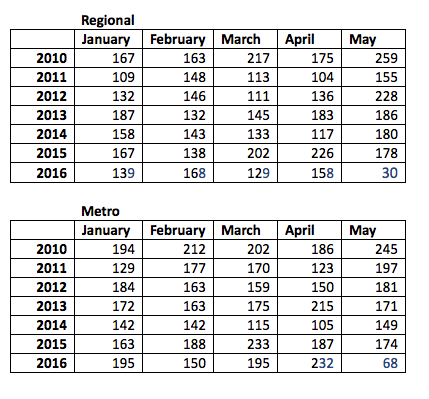 Spouting stories for more than a century

Burst water mains have been of keen interest in Adelaide for more than 100 years – and the speed of the local water authorities in addressing problems is an enduring concern.

A look through the newspaper archive shows a plethora of burst main reports, some even making their way to interstate papers.

In 1933, The Advertiser reported that the Cox Brothers and Ruthven Frederick Ruthven Smith (of the Ruthven Mansions) took civil action against the Commissioner of Waterworks for a burst main two years earlier that flooded their Pulteney Street premises.

Some of the allegations sound a little familiar.

“The plaintiffs alleged that the Commissioner had no proper system of supervision to deal with defects in water pipes and to prevent the escape of water: that he took no proper steps to regulate or reduce the pressure of water; and that he negligently omitted to have a man and other means in readiness to cut off the water.

“The Commissioner denied all these allegations, and pleaded that all reasonable steps were taken after his officers were notified of the escape of water, to reduce the pressure in the pipes.”

The media itself was the victim of a “remarkable” burst in 1911, not far from the site of a similar explosion in Pirie Street this week, as this colourful report in the Barrier Miner details:

“One of the most remarkable cases of a water main bursting in the city occurred just before 10 o’clock last night in King William Street, in front of the ‘Advertiser’ office. Soon the water spread over the whole thoroughfare, and from in front of the Town Hall to Currie Street there was not a dry spot on the road. The gutters were quickly running, just as they would after a tropical downpour, and the basements of the various buildings in the vicinity were swamped. The Waterworks Department immediately notified the turncock, who hurried to cut the water off.”

It’s all about the pictures

TV news ratings during this week’s stormy weather went sky high, with leader of the pack, Seven, racking up a huge figure.

In its biggest ratings performance in quite a while, Seven recorded 166,000 viewers on the night of big winds and tides, with the next best rating service, Nine, following way behind on 98,000.

Seven’s big performance is a reminder of the importance of being the front-runner in TV news when big news breaks, particularly when the news involves spectacular pictures.

What a difference a week makes.

Last week, The Advertiser splashed with the news that Uber was “abandoning” South Australia in relation to its UberX ride-sharing service, in protest at the State Government’s regulatory regime which begins on July 1.

After several InDaily stories pointing out that Uber appeared to be pressing on regardless, today the cashed-up company told the Tiser it would be beginning its UberX services in Adelaide today – free – in protest at the State Government.

Uber seems to have lost control of its own message, spoiling its story in the Murdoch press today by letting the cat out of the bag early.

One of Uber’s media operatives yesterday told Ten news reporter Jemma Chapman that UberX would be starting up in Adelaide today – but then hastily calling back to say it was just a “marketing promotion”, and the info was under embargo.

Undeterred, Chapman – quite rightly – put the information to air.

This week, The Advertiser failed to send a reporter to Martin Hamilton-Smith’s appearance before the Electoral Districts Boundaries Commission. We did, along with the ABC, and our senior reporter Tom Richardson duly reported on Hamilton-Smith’s surprising comments that he would be prepared to support a Liberal Government after the next election.

Soon after we published, The Advertiser ran its own  story – without a byline – with a series of quotes which would have seemed very familiar to InDaily readers.

But perhaps we should be grateful for small mercies. They didn’t, after all, add one of their increasingly large “Exclusive” tags to the apparent cut and paste job.

Waleed Aly, the columnist, academic and broadcaster, this week won the Gold Logie, launching a flurry of columns about why he shouldn’t have won it, or why winning it invalidates his past views on anti-Muslim sentiment in Australia, or why his win heralds a new era for television, or should herald the end of the Logies itself.

Beyond all the fast-take nonsense, the fact is that he is an erudite and nuanced voice in the media – both qualities we surely need. A great example is his column this week on Donald Trump and the new, Muslim, mayor of London. It’s a smart piece of writing.